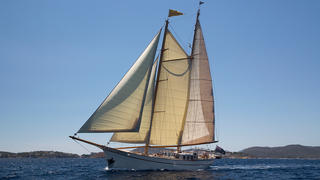 Built in steel by Dutch yard Scheepswerf Piet Smit, she was delivered in 1916 as one of the Dutch North Sea pilot schooners and was totally rebuilt to luxury yacht standards during 1995/99 and most recently refitted in 2017. Accommodation in a satin varnished mahogany interior is for eight guests in four cabins consisting of a master suite, a VIP suite and two twins, all with full headroom, entertainment centres and en suite shower facilities. Four crew are accommodated in two cabins aboard this yacht for sale.

The deck saloon has full headroom and comfortable seating on U-shaped and L-shaped settees, along with side tables and a built in entertainment centre including a large screen television set on a rise and fall mechanism.

Outside, her decks are wide with high bulwarks adding an extra safety factor. Under power, a single 316hp Scania diesel engine gives her a cruising speed of 8 knots.

Silver Spray has had a long and varied history, beginning her life as a pilot ship for the approaches to the major Dutch ports during the First World War. Later, after she was replaced by more modern vessels, she plied the North Sea and Arctic waters as a fishing boat and later still served as a patrol vessel around the Faroe Islands to maintain their neutrality during the Second World War. She passed through several owners until she returned to Holland and was completely rebuilt in 1999.