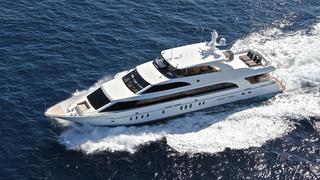 Built in GRP by Hargrave Yachts in Taiwan to a design by Hargrave Yacht Design, Gigi II was delivered in 2012 as one of the yard’s Euro-styled raised pilothouse models with wrap around windows. Yacht Interiors by Shelley used gloss walnut wood and cream marble to create a luxurious ambience sleeping eight guests in four cabins consisting of a master suite, VIP suite and two doubles convertible into twins, all with entertainment centres, television screens and en suite facilities.

The main saloon is large, with two 10’ settees, a bar and an entertainment centre including a 60 inch television screen on a rise and fall system while forward is a formal dining area seating eight guests on custom made chairs.

The aft deck is designed to be an area that can house a large group for relaxing or dining. The table seats 14 for dining and the centre section can be removed to create two cocktail tables for a more casual occasion. There is also a 32 inch flat screen television behind the professionally equipped bar.

Up on the flybridge features include seating areas for up to 14 guests, a full bar, fridge, wine cooler, barbecue, Jacuzzi, sun pads and four sun loungers, each with a small side table. There is also a custom hard top for protection against the sun.

Twin 1,825hp Caterpillar engines give her a cruising speed of 12 knots.