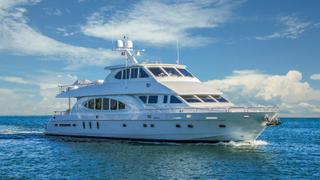 The 29.26 metre motor yacht Lady De Anne V, listed for sale by Jeff Stanley at Gilman Yachts, has been sold in an in-house deal.

Built in GRP by Hargrave Custom Yachts to a design by JB Hargrave, Lady De Anne V was delivered in 2004 as a skylounge model. Shelley Yacht Design created a welcoming interior in cherry wood trimmed with lacewood accommodating up to eight guests in four cabins. These comprise a master suite, full-beam VIP suite and port and starboard twins, all with entertainment centres, television screens and en-suite bathroom facilities. In addition, two further cabins sleep three crew.

The main saloon features an intimate seating area immediately to port on entry from the aft deck, with two large settees, two matching armchairs and a coffee table decorated with a Chinese motif. To starboard is a four-door curved cabinet concealing an entertainment centre including a new 40-inch Samsung HD television screen and DVD player. Forward, the dining table seats up to eight guests and is surrounded by eight cherry wood cabinets storing glassware, china and silver cutlery. Further forward still, the galley includes a raised settee and a granite-topped table for breakfasts and casual meals through the day.

Up in the skylounge, twin leather helm chairs are situated forward, while a large leather U-shaped settee and a round coffee table have been fitted just behind the helm position. To starboard is a curved cabinet with a new 49-inch Samsung television screen and a Sony Blu-Ray DVD player.

Twin 1,400hp MTU diesel engines give her a cruising speed of 18 knots, topping out at 21 knots.