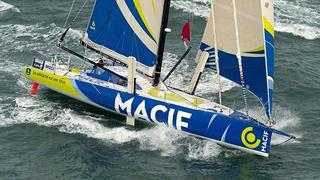 All sports have their Everest to conquer and the Vendée Globe is the one for the offshore races. The seventh edition of this legendary race around the world was won by François Gabart on Macif yesterday afternoon.

Just a few facts. The Vendée Globe is a round-the-world race without stopping or assistance, with only one harbour for the start and the finish, Les Sables d'Olonne in the middle of the French Atlantic coast. This race was created by Philippe Jeantot at the end of the 80s, and the first edition (1989-1990) was won by Titouan Lamazou in 109 days and nearly 9 hours.

Started in November 2012, the 7th edition finished yesterday with the victory of François Gabart, who becomes the youngest winner (aged 29) of this race. Amongst many records broken along this edition, this one will stay forever as an historic moment: Gabart is the first to achieve this circumnavigation under the mythical 80 days of Jules Verne. He won the race in 78 days 2 hours 16 minutes and 40 seconds at an average speed of 15.3 knots.

This timing is nearly unbelievable for a monohull, especially when we compare this time to the first attempts at the Jules Verne Trophy, done by multihulls with full crew. François Gabart, on a monohull and alone, was faster than Bruno Peyron and his team on Commodore Explorer, a 26m catamaran. In 1993, Peyron did it in 79 days...

This 7th Vendée Globe was also a fantastic feat thanks to the duel that François Gabart had with Armel le Cléac'h on Banque Populaire. These two sailors were almost in a match race, becoming the first and second alternatively. They were also together, with only a few nautical miles between them, when they arrived at the Horn Cape. In the end Gabart won, and Le Cléac'h arrived only three hours after him, after a race of 28,000 nautical miles.

Both sailors were on 60ft sistership sailing boats designed by VPLP/Verdier. Banque Populaire (ex-Foncia) was launched in September 2010, and Macif in August 2011.

The podium should be completed by Alex Thomson on Hugo Boss in a couple of days, while the last one is cruising off the Brazilian coasts and shouldn't arrive before a couple of weeks.