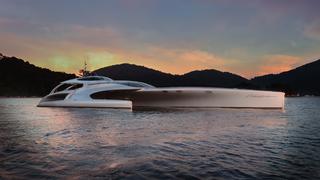 The iconic 42.6 metre trimaran Adastra has been listed for sale with Burgess.

Built by McConaghy Boats, she was delivered in 2012 to an experienced yacht owner. The futuristic design was penned by John Shuttleworth with interiors by Jepsen Designs. Adastra won a coveted Neptune at the World Superyacht Awards in 2013 for the most innovative yacht.

Made for exploring, an impressive 10,000 nautical mile range means she can cross the Atlantic twice before needing to refuel. A shallow draft of 1.2 metres allows her to access hard to reach anchorages and shallow bays too.

The main saloon benefits from large wrap-around windows, with a door in the centre leading to a large sun bed on the foredeck. This outdoor area can be shaded with an awning suspended from carbon-fibre poles set into the deck.

Below, extra space has been created by flaring the central hull above the waterline. Adastra can accommodate up to nine guests in a full-beam master cabin and two doubles, with a crew of six. The master cabin is accessed from the saloon and sits aft in a section of the main hull. The guest cabins are forward of the engine room with crew cabins and the galley further forward still.

The main helm station, which has two seats on a plinth that give a view over the cabin top, is in a raised pilothouse between the saloon and the aft deck. Adastra also has a 4.8 metre tender, a second three-metre tender.

The hulls of the yacht are formed from e-glass/Kevlar foam sandwich, with the deck and superstructure made of carbon fibre and Nomex honeycomb core. Power comes from a single Caterpillar C18 1150hp main engine and two Yanmar 110hp outrigger engines, for a top speed of 23 knots.