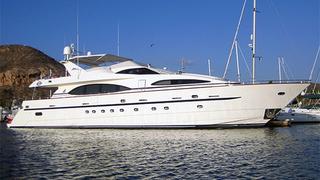 Simon Gibson at Worth Avenue Yachts tells me he and Leonce Richard have joined forces with Roberto Aboumrad at Performance Boats to jointly list the 30.5m motor yacht Mi Cielo for sale.

Mi Cielo was delivered by Azimut in 2006. Her lavish François Zuretti interior sleeps eight guests in a master, VIP and two twin cabins and this superyacht’s two 1800hp MTU engines power her to a cruising speed of 22 knots and a maximum speed of 25 knots. Her 2011/2012 refit saw her engines and generators rebuilt and a new air conditioning system installed.