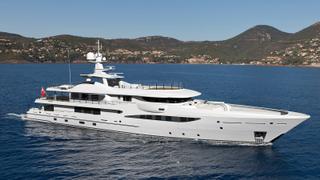 The 55 metre new-build Amels motor yacht Project 472, one of the yard’s Limited Editions 180 yachts, has been sold with Peter Brown at Burgess introducing the buyer.

Currently under construction in steel and aluminium with exterior design by Tim Heywood and an interior by Laura Sessa, she is due for delivery in summer 2018 as the latest hull in the Amels Limited Editions collection, which was first announced at the 2005 Monaco Yacht Show.

An extended version of the 177 model, she offers an enlarged sun deck which is now 28 metres long and has 155 square meters of relaxation space. The sundeck also accommodates a touch-and-go helipad, which becomes part of the guest area when not in use.

There is a strong emphasis on open-air access and as a result the owner’s suite will be fitted with a folding balcony, while the main deck saloon has a further two sea balconies. She will also feature a large swimming platform with a beach club and steam room plus accommodation for up to 12 guests in six suites.

Peter Brown of Burgess says: “It has been a pleasure working with Amels on the sale of this Limited Editions yacht and we now eagerly anticipate the delivery of what will be a truly spectacular launch.’’

"This new yacht beautifully highlights the advantages of our Limited Editions approach to yacht building," comments Amels' commercial director Rose Damen. "The Amels 180 has been the world’s best-selling 55-metre yacht design since 2007, and we’ve been able to do that through constantly evolving and introducing new features. We can’t wait to see her on the water with her owner later this year."

The asking price of Project 472 has been withheld.