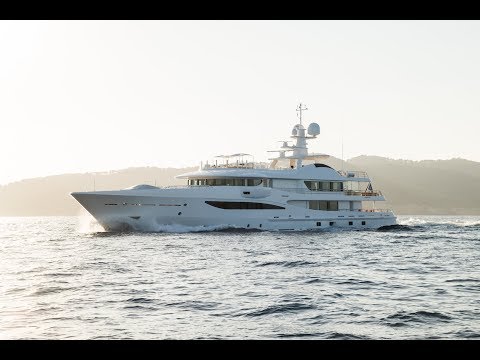 The latest Amels Limited Editions 180 yacht EJI has been filmed in the Mediterranean ahead of her premiere at the Monaco Yacht Show next month. It comes after the yacht was delivered to her owner in May. She has since been listed for sale by Burgess.

EJI's captain Christian Power oversaw the build of the yacht and revealed the team were able to complete sea trials in just one day. “I have to say, after building several yachts, I’ve never been able to deliver a yacht a week early,” he said. “And that’s all down to Amels' organisation and skills and it’s just amazing that we’ve got there a week early.”

Amels commercial director Rose Damen said the secret behind the Amels 180's success is its constant evolution and introduction of new features.

The 55 metre yacht was built to Lloyd’s and MCA standards from a steel hull and an aluminium superstructure that encompass a total interior volume of 707GT. Exterior styling comes courtesy of legendary British designer Tim Heywood, while the interiors were developed by Laura Sessa Design.

Accommodation on board the new Limited Editions 180 is for up to 12 guests split across six staterooms, while the crew quarters allows for a staff of up to 12 people. Key features on EJI include three fold-out balconies and an extended superyacht sundeck, which measures an impressive 28 metres long. EJI also boasts a seven person Jacuzzi.

The yard revealed that it is already working on its next Amels 180 which is under construction for delivery in spring 2019.