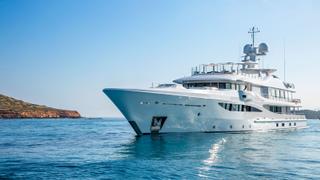 The 55 metre motor yacht Eji has been sold, with the buyer and seller represented by Burgess.

Delivered in May 2018, Eji was built to Lloyd’s and MCA standards by Dutch yard Amels from a steel hull and an aluminium superstructure that encompass a total interior volume of 707GT. Exterior styling comes courtesy of legendary British designer Tim Heywood, while the interiors were developed by Laura Sessa Design.

Accommodation on board this new Limited Editions 180 model is for up to 12 guests split across six cabins consisting of a main deck full beam master suite, three doubles and two twins. All guest cabins have entertainment centres, television screens and en suite bathroom facilities while the crew quarters allow for a staff of up to 12 people.

A stylish, spacious saloon area with subtle red design detailing offers a fully equipped bar, comfortable seating and a sophisticated entertainment centre including a large screen television set, while a special feature comes in the form of port and starboard folding sea balconies. Al fresco cocktails can be enjoyed on the aft deck where steps on either side lead down to the beach club area with a day head, sauna and steam shower.

Eji has one of the most expansive sundecks in her class, including sunbeds, a dining area, separate seating area, large 3,000 litre Jacuzzi spa tub and the option of a touch and go helicopter pad.

Power comes from a pair of 1,308hp MTU 16V2000 M70 diesel engines for a top speed of 15.5 knots. When trimmed back to an economical speed of 13 knots, she has a transatlantic range of 4,500 nautical miles, thanks to a total fuel capacity of 115,000 litres. For added comfort and safety, she is fitted with Naiad zero speed stabilisers.