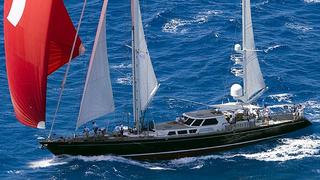 Built in 1987 by Southern Pacific Yachts in New Zealand, Avalon has since circumnavigated the globe, completed two successful tours to the South Pacific, and become one of the most celebrated Newport and St. Barth’s Bucket race veterans in history. She features generous accommodation for six guests and five crew in a traditionally appointed interior and has consistently benefited from thoughtful refits and updates by her owners.