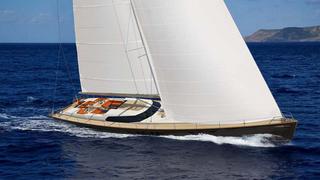 Currently under construction at the Dutch yard Jongertwith the hull 45 per cent complete, she is being built to RINA class and MCA LY3 coded. Code named the Jongert 3200P, naval architecture is by Dick Mulder and exterior and interior design by Rhoades Young. The Jongert 3200P is the first in the Jongert Performance Line and has exceptionally sleek lines designed to comfortably cruise the globe.

She will be managed by a crew of four and offers accommodation for six or eight guests depending on the cabin configuration chosen and is being built in Alustar with a carbon mast and rigging. There are no fewer than four main deck layout possibilities. The main deck saloon will offer 360 degree panoramic views and a patented Jongert folding keel will reduce her draft from six metres to just 3.7 metres, allowing access to shallow waters.

Delivery would be 18 months from contract signature and the asking price is €10.9 million.