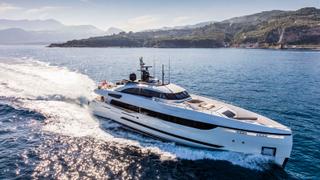 The 40 metre motor yacht enigmatically-named K has been listed for sale by Tommaso Bilotta and Marco Fodale at Camper & Nicholsons International.

Built in aluminium by Italian yard Palumbo to a design by Hydro Tec, she was delivered in 2015 as a hybrid sports yacht and most recently refitted in 2019. RINA classed, her interior accommodates up to 11 guests in five cabins consisting of a full beam master suite, two doubles and two twins plus a Pullman berth, all with entertainment centres, flat screen Samsung television sets and en suite bathroom facilities. There is also accommodation for seven crew in four cabins.

A large saloon comes with sofas, coffee tables, occasional chairs and an entertainment centre including a large flatscreen Samsung television set and a Kaeleidescape server giving on-demand audio and visual systems throughout the guest areas of this yacht for sale. Forward is a formal dining area with seating for 10 guests. A special feature of the saloon is a pair of folding sea balconies on each side.

The aft deck offers glorious space for al fresco dining on free standing settees, chairs and tables, and has port and starboard stairways down to the luxurious beach club which comes with a Jacuzzi spa, bar, gym and bathroom.