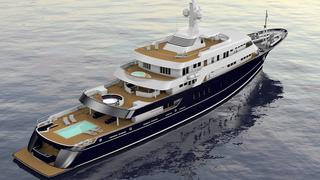 Stuart Larsen and Ken Burden at Fraser Yachts have worked together to sell the partially-completed 77 metre motor yacht — known as project U77.

Her keel was laid at the Chilean yard Marco in 2006 and she was launched in 2011 but she has never been registered. Built in steel and aluminium to Lloyds class and MCA coded to LY2, she is presently laid out as a generous well appointed 10 stateroom yacht for 20 guests. The owner's suite is on the bridge deck with access to its own private aft deck. The VIP suite and four guest cabins are located on the main deck and the lower deck hosts a further four guest cabins, all with en suite bathroom facilities.

The upper deck has an observation lounge forward, a formal dining room and a bar while on the sundeck a Jacuzzi with sun pads either side is forward with staircase access down through the funnel to the bridge deck. This sun deck could also be extended aft for a heli pad. The yacht is approximately 50 per cent finished with most equipment purchased so could be completed in 12 to 18 months depending on the buyer's choice of eventual layout. Twin 3512B Caterpillar engines will give her a range of 8,000 nautical miles at 13 knots.

Stuart Larsen has confirmed to Boat International that she is now on her way across the Pacific to Europe on a Dock Express ship. While all the equipment to complete her fitting out is on the way on another Dock Express ship.