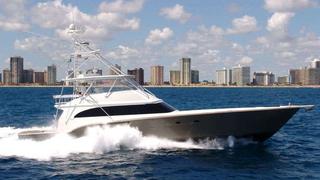 Alex Clarke at Denison Yacht Sales asks me to broadcast news of a $200,000 price cut on the 24.3m Donzi R80 sportsfisherman he has for sale.

The 2010 Donzi R80 is being sold as a new yacht with full manufacturers and engine warranties at the fraction of the cost of a 2014 model having only been on display at Florida boat shows since being launched. To give an idea of value - Donzi just delivered a new custom 2013 model to a client this past winter, which had a build cost close to $8 million

Powered by twin MTU 16V 2000 M93 Series 2,400hp engines she has a top speed of over 41 knots and a cruise speed over 34 knots. She sleeps six guests in three staterooms plus separate crew accommodation for three.