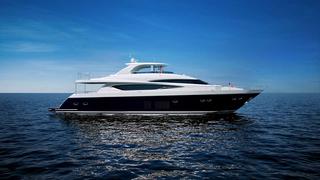 A 30.12 metre Princess 98 motor yacht has been sold by Roger Lipman at Princess Motor Yacht Sales in Swanwick, UK.

Built in GRP by British yard Princess to a design by Bernard Olesinski as one of the yard's 98' models, she was delivered in 2014 and has been used as a demonstrator model. The interior finish is in gloss walnut paneling with wenge flooring in the saloon, galley and helm. Accommodation is for eight guests in four cabins. These comprise a master with a dressing table, armchairs and a spa bath in the en suite bathroom plus a VIP suite forward and there is a double to port and a twin to starboard. All cabins have entertainment centres including LED television screens and have en suite bathroom facilities with under-floor heating.

The saloon is ideal for relaxation and entertaining with large settees in a U-shaped configuration and further occasional seating plus coffee tables along with an entertainment system including a large LED television screen. Formal dining forward is for eight guests.

Further features include fabrics by Armani Casa throughout, a hydraulic teak swim platform and a transom garage that can accommodate a three person jet ski.

The flybridge has all the facilities needed for al fresco dining and also boasts a Jacuzzi spa, a waterproof sound system and a hard top with an electric sunroof.

Twin 2,637hp MTU engines give her a cruising speed of 27 knots and she is fitted with Trac zero speed stabilizers.

Now delivered to her new owner in Europe, the Princess 98 was asking £6.3 million.