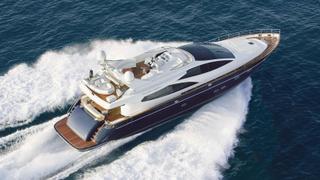 The 26 metre motor yacht Amore Mio, listed for sale by Dimitris Kyriazakos at Ekka Yachts, has been sold with Intermediazone Maritime introducing the buyer.

Built in GRP by Italian yard Riva with exterior styling and interior design by Mauro Micheli, Amore Mio was delivered in 2004 as a Riva Opera 85 model. A thoroughly modern interior in a neutral colour palette sleeps eight guests in four cabins consisting of a full-beam master suite amidships, VIP suite forward and twins to port and starboard, all with entertainment centres, LCD television screens and en-suite bathrooms. In addition, a further two cabins sleep three crewmenbers.

In the saloon, three cream-upholstered settees are grouped in a U-shaped configuration facing a portside entertainment centre including a 43-inch plasma screen television and a Bose Lifestyle stereo surround sound system, while further forward is a dinette seating eight guests.

A favourite al fresco dining area is the aft deck with upholstered bench seating, a walnut table and four rattan chairs, while up on the flybridge is built-in semi circular seating, a central helm position, two tables, a wet bar, fridge and barbecue grill plus the convenience of a hydraulic Bimini top for shelter from the elements.

She is built for speed with twin 2,000hp MTU diesel engines powering her to a cruising speed of 28 knots topping out at 32 knots.