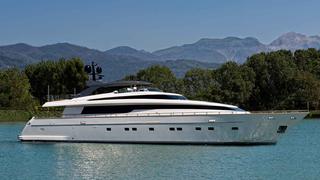 The 33 metre motor yacht Regine has changed central agencies and is now listed for sale by Kurt Lehmann at Yacht Moments with a €1 million price reduction.

Built by Italian yard Sanlorenzo to a design by the in-house team as the 15th in the yard's popular SL108 series, Regine was launched in May 2012. A modern interior by Della Role accommodates 10 guests in five cabins consisting of a full beam owner’s cabin with limestone flooring and four further guest cabins: a VIP suite, two double cabins and a twin. All cabins in this yacht for sale have television screens and en suite bathroom facilities.

Her interior has a 'nautical chic' motif, with white limed teak floors and walls and modern furniture throughout. The capacious saloon has an L-shaped seating arrangement to port facing an entertainment centre including a 50 inch television screen and there is also a full wet bar and a dining area forward with seating for eight guests.

The flybridge is well equipped for al fresco entertaining and dining, offering a Jacuzzi tub, ample upholstered seating, a table and an adjustable awning for protection against the sun.

She is powered by twin 2,637hp MTU engines which, coupled with a planing hull, give her a top speed of 28 knots and a cruising speed of 24 knots. She is fitted with zero speed stabilisers. Always a private yacht, she has only had light use and has never been chartered.

Lying in the South of France, Regine is now down to €5.95 million.