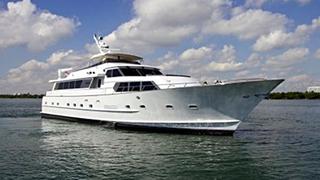 Sharing the same name as the now defunct French yard, L'Esterel was built in 1984 and sleeps five guests in a double and three single berths.

A major refit completed just this month sees her generators and twin 875hp Detroit Diesel engines overhauled with only 150 hours on them, while a brand new interior is, says John, enough to leave home for.