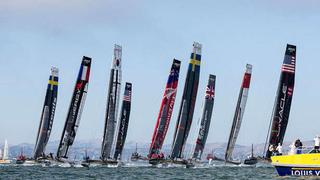 The UK south coast city of Portsmouth will play host to two events in the qualifying series for the 2017 America’s Cup, it was announced today.

The two events in the America’s Cup World Series (ACWS) will take place from 23-26 June 2015 and 21-24 July 2016, with teams racing right outside the historic harbour’s entrance in AC45s (foiling catamarans).

“The series will attract huge crowds to watch the exhilarating racing and we plan to give the event a festival feel bringing activities and entertainment for all,” says Sir Keith Mills, founder of TEAMORIGIN Events, which will be managing the two regattas.

Other venues confirmed for the ACWS are Cagliari, Italy, 5-7 June 2015, and Hamilton, Bermuda, 21-24 July 2016 – Bermuda is rumoured to be hosting the America's Cup in 2017, and the official venue will be announced in a press conference a week from today.

All America’s Cup teams will compete in the ACWS, and their overall placement will affect the seeding and starting score they take into the America’s Cup Qualifier events in 2017. The ACWS was introduced for the 34th America’s Cup, and it saw nine events held across the world between 2011 and 2013. Sir Keith Mills, also an investor in Ben Ainslie Racing (BAR), said he hoped to replicate the commercial success of the previous qualifying series.

Sir Charles Dunstone, chairman of BAR, added: “Sport is big business. The last time the ACWS came to Britain was Plymouth in 2011, and we saw 150,000 live spectators, and the economic value and media impact of the event was estimated at £60 million.”

The Portsmouth races will be familiar turf for Ben Ainslie Racing, which is building its headquarters in the harbour as Sir Ben Ainslie and his team is making an America’s Cup bid for Great Britain. Speaking at the announcement today, Ainslie, says, “The last ACWS was a game changer for the sport of sailing, the racing was entertaining and brought in the crowds. Portsmouth offers a great natural racecourse. It will be awesome for the crowds.

“The new foiling AC45s are going to be faster and even more exciting than the previous generation and we promise to provide an event experience like you have never seen before – come and cheer us on!” says Ainslie.