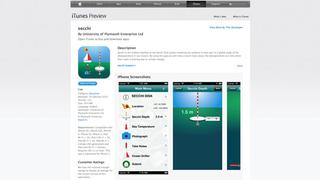 Yacht owners and guests have been invited to track the effects of climate change using a smart phone app.

The global project by Plymouth University’s Marine Institute will measure the amount of phytoplankton in the world’s oceans, with information gathered by seafarers. Scientists fear the population of the microscopic beings, at the very start of the marine food chain, is in decline due to rising sea temperatures. If true, this could have consequences for every aspect of marine life.

Contributors will lower a Secchi Disk (a disk used to measure water transparency) attached to a measuring tape overboard and the depth at which it disappears from sight estimates the amount of phytoplankton in the sea. This depth can then be uploaded to a database using the Secchi app.

‘As the phytoplankton live at the surface of the sea they are being affected by rising sea temperatures due to climate change,’ says Plankton biologist Dr Richard Kirby, who is leading the study.

‘A scientific paper published last year suggested the ocean's plankton population had declined by as much as 40 per cent since 1950. Like all marine creatures, phytoplankton have a preferred optimum sea temperature no matter where they are in the world and we need to know more about how they are changing in order to understand the effects on the ocean's biology.’

The free app is called Secchi after Father Pietro Angelo Secchi, an astronomer who invented the disk device in 1865 to measure water turbidity in the Mediterranean.