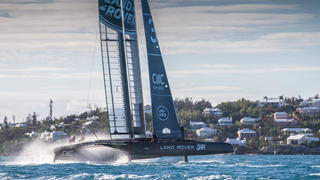 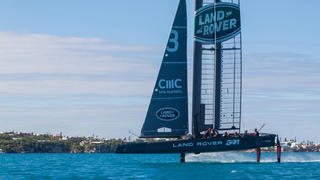 There’s just one month to go before the first race of the America’s Cup Qualifiers — in our case against Sweden’s Artemis Racing on 26 May. We’ve had our America’s Cup Class boat in the water since the beginning of February and in these final few weeks we’ve been testing and developing to prepare her for racing.

This has come down to fine-grained technical work. These America’s Cup Class boats have many “one-design” elements — parts that are strictly controlled by the rules. These include the hulls, crossbeams and wings, so the rudders and daggerboards, and the internal systems that control the movement of the foils and the wings, are the major areas for work.

The goal — the key to winning this America’s Cup — is to be able to “fly” or foil the boat around the entire course, and to be able to do it in a wider range of wind speed than anyone else. Some of these things involve a trade-off: the shape and size of daggerboard that we need to take off in low wind speeds is completely different from the one that goes fastest in 20 knots of breeze.

But the good news is that the rules allow us to change the foils, so we can develop shapes for low wind speeds that have more lift to get the boat out of the water earlier, and thinner boards for high winds, to achieve a higher top speed. We have been working hard to develop exactly the right shapes and to figure out where they cross over.

If you have been following the America’s Cup news, then you will have seen that a lot of the focus has been on foiling tacks (and to a lesser degree on gybes and mark roundings — but these are more straightforward). Achieving all these consistently is the sum of so many things. Some of them are simple technique changes — like who moves where on the boat and when they do it — others have big impacts on the mechanics and engineering of the boat.

Our ability to move the daggerboards quickly — both changing the rake and getting them up and down — is fundamental to keeping the boat in the air. It has made big demands on our hydraulics and systems teams. We are constantly asking the engineers to give us more as we push foiling into more conditions and circumstances, and so far they have done it.

It’s also about finding and refining every single little thing that has an impact on performance. Back in the days of America's Cup monohulls, that meant chasing the last half a per cent in luff curve on the mainsail, or the last centimetre in headsail lead position.

Now it’s about getting the rudder and board rake correct to the last half a degree for dozens of different circumstances. It’s about finding exactly the right height to fly the boat above the water, both in a straight line and going into each manoeuvre, and dozens of other parameters that are too technical (or too confidential) to go into here.

It’s been an incredible journey to build this team from nothing, and to slowly focus down on smaller and smaller problems and issues. Three years ago it was all about finding partners, hiring designers and sailors, deciding where to build our home base — big, macro issues.

Today I find myself worrying about whether we could use another degree of Ackermann (don’t ask) at 20 knots of wind speed. It’s a good problem, the right problem to have at this stage. We’re on track, still chasing, but on track.