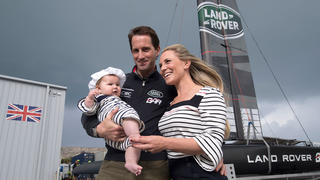 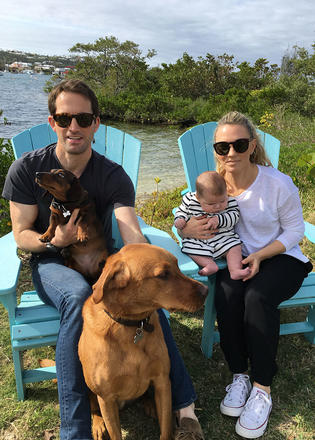 Dear husband: A letter from Georgie to Ben Ainslie on the eve of the America's Cup

On the eve of the 35th America’s Cup, Sir Ben Ainslie’s wife Georgie writes him a heartfelt open letter...

I’m sure you’ve seen it and have most likely been ignoring it, but there is a countdown clock that’s been quietly ticking away in the middle of Front Street, in Hamilton, since we arrived here in Bermuda. It has been telling us, whether you’ve wanted to listen or not, how long we have to go until the AC35 begins. When we first arrived it said we had 150 days left. Now we are down to far smaller numbers. The quiet tick-tock of that clock has, in recent weeks, suddenly got a lot louder. It seems crazy to think that whatever happens this month and next has been three years in the planning and that everything you and the team have worked so hard for comes down to four very unpredictable weeks this summer.

When you’re inclined to worry, try not to and remember you are a past master at this. You are used to Olympic campaigns where the training lasts for four years and the performance must come together in just two weeks. The physical challenge of such campaigns is one thing, the mental stresses and strains are quite another, and most of us can hardly imagine them. You have a saying you always fall back on when you’re being asked about the pressures of the big stage. You religiously say that “the winning is all in the preparation. If you’ve worked harder than everyone else then you can do no more.”

That is why I’ve seen you and the team work yourselves into the ground to get the job done. You’re the first into the office in the morning because you believe good leadership comes by setting an example to others. You always try to make it home before Bellatrix goes to bed, but just because you’re at home it doesn’t mean the day job stops. Often you send yourself to sleep catching up on the stuff you can’t focus on when you’re out training on the boat or in the gym, constantly brainstorming ways you can make the boat go faster, motivate the team more or keep the investors and sponsors happy.

If preparation is the key to success, as you so steadfastly believe it is, then you’re in a good position. If in a few weeks’ time we are celebrating a Cup victory – and planning where it’s going to sit on the mantelpiece at home – then I hope you know Bellatrix and I will be beyond proud of you because only we truly know what it took to get here, let alone win this thing. If AC35 proves to have come too soon for you and the team and we don’t get to bring the Cup home this time then we will, as a family, take a deep breath, have a holiday and go again next cycle, wherever it is.

So as that countdown clock in Hamilton ticks down to the first day of racing, make the most of the coming days and weeks however it plays out in the Great Sound. What you’ve created isn’t just a team capable of winning the Cup but a team that would, without question, go into battle with you anytime, anywhere.

Go out there with equal doses of aggression and humility, as only you know how, and maybe, in between foiling tacks, take a look around and enjoy the achievement of just being here and racing in your name for the America’s Cup. You have the best team off the water – and, let’s hope, on it too.