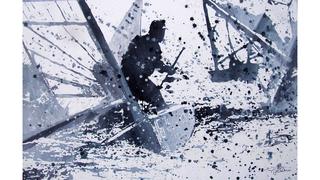 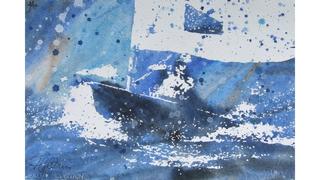 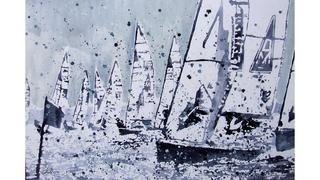 From the peace and serenity of Monet’s Gondola in Venice to the tempestuous action of Bakhuizen’s Battle of Vigo Bay, there’s no disputing that the ocean, and sailing in particular, has inspired some of history’s truly great fine art.

In the modern era, it would be hard to argue that sailing comes any more thrilling than that witnessed during the America’s Cup and what better opportunity to immortalise this sport in paint and canvas than in the lead up to the 2017 finals in Bermuda?

To this end fine artist Jeremy Houghton, whose previous works range from London Fashion Week to the 2012 Olympic games, has been revealed as the official artist in residence of Land Rover BAR. We caught up with him to talk about the artistic appeal of the America’s Cup, his plans for the series and why being able to help the 1851 Trust is so important to the project.

What drew you to this project?

My background is as a sporting artist and when I paint I work with movement, light, time and space. I did a lot of work around the 2012 Olympics and spent time in Weymouth where the sailing events were held - the light, the spray, the movement and the speed mean the artistic possibilities of sailing are endless.

When I heard Ben Ainslie was putting together a team for the America’s Cup it was very much at the top of my list of projects. The America’s Cup is so exciting and the sailing is immense. Of course, the other brilliant thing about painting sailing is that you get to go out on a RIB or chase boat and have a great time instead of just watching from the touchline.

When I’m not painting sporting events the other big theme I work with is flight. One brief look at images of the new America’s Cup yachts shows that these boats literally fly. In many ways this project with BAR is a mixture of my two main forms and I really hope I can represent this amazing hydrodynamic and aerodynamic technology in my work.

You have a very distinctive, almost monochromatic style. How do you think this helps capture the motion and energy of sailing?

I’ve developed a technique using masking fluid which basically seals all the parts of the paper I want to keep white. The final result has echoes of old, vintage photography or negatives but it also has a very futuristic feel - it eliminates details and just leaves the bare essentials which is really important when portraying speed.

The lack of colour in my work also makes the viewer focus on the key bits of the composition and that helps convey the story I’m trying to tell. If you look at any great sporting event, it’s not just the heroes of the past that matter but the heroes of the future too, and it’s important to me to represent this narrative in my work.

What will the creative process between yourself and the BAR team look like?

I’m going to spend one week per month at BAR’s headquarters in Portsmouth until the Bermuda final in 2017, as well as heading out to at least one of the World Series events with them.

These international events and the final race are really important – and I really hope they take the gold – but I think life off the boat is just as important as life on the boat. There’s a massive team backing up the five guys on the boat and it takes a lot of blood, sweat, tears, perseverance and hard work to get them to the final. I really want to make sure I represent the people who design and build the boats, as well as those who sail them.

Tell us a little bit about the charitable angle of the project.

I’m working in conjunction with the 1851 Trust to help raise money for them through exhibitions and the sale of the works. The details haven’t quite been finalised yet but I hope that I am in some way able to get kids from lots of different backgrounds into sailing and show them that it can be about design and technology and science as well as the actual act of sailing.