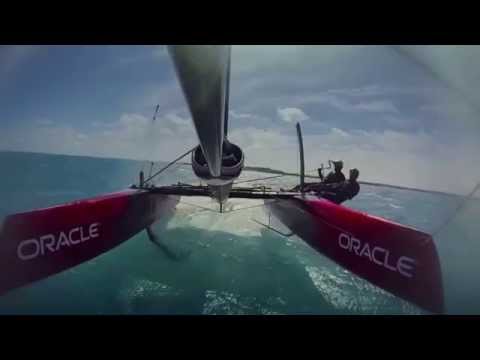 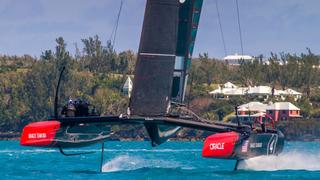 The America’s Cup 2017 Defender, Oracle Team USA, crashed its practice boat while sailing on Bermuda’s Great Sound on 4 May.

The jaw-dropping crash was captured on video (below), recorded by the American team from on board its fast-flying catamaran yacht. The video shows the Flying Phantom boat literally flying along on the water crewed by Tom Slingsby and Sam Newton – until the port side touches down on the water too heavily and the team can’t maintain its bearing and are dramatically thrown off the boat. Despite the massive spill, the team members and the practice boat are okay.

Oracle Team USA can be spotted in the coming weeks practicing on both its AC45S and its foiling Phantom catamarans and moths in Bermuda.

Oracle Team USA is the first America’s Cup team to sail an AC45 boat in Bermuda, hosting the America's Cup in 2017. A recent dramatic rule change determined that the 2017 America’s Cup would see the teams downsizing from the AC62 to these smaller yachts, a move that is meant to result in cost savings.

“[It] is the first day for our AC45 out on the Great Sound. We’ve been working towards this moment for nearly six months since Bermuda was announced as the venue,” said Tom Slingsby, USA's sailing team manager and tactician.

The practice was focused on fine-tuning the AC45 yacht, checking all the systems and making sure everything was working as it should be. While Slingsby said the real training and practice would take place later this week, the defending champions have already pushed the boat and crew to the limit.

“Pretty much from the start, we were foil-gybing and we even took a crack at a couple of foiling tacks. It was fantastic. A perfect day in Bermuda with 15 knots of breeze”, says skipper Jimmy Sptithill.

Spithill says the reaction from other sailors out on the water, such as the International One Design fleet who were out for a race, was more than positive.

“We were absolutely tearing past them and we were getting a few hoots and hollers,” Jimmy Spithill says. “People are really blown away when they see what this boat can do.”