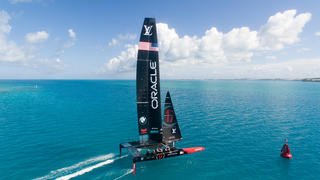 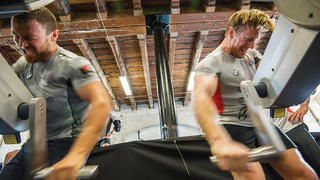 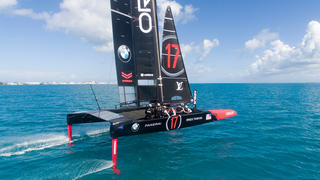 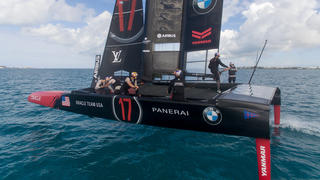 Jimmy Spithill: Bermuda set for most exciting America’s Cup yet

We’ve just returned from the second day out on Oracle Team USA’s new America’s Cup Class boat and I’m excited to tell you I think we’re going to have some incredible racing this summer.

The second day on the water we were hitting speeds above 40 knots in 20-plus knots of wind. Our first day out was in much lighter conditions, ideal for easing the boat in, but even then we were foil tacking and foil jibing across the race course. It’s just amazing what these boats can do. But getting here hasn’t been easy.

It starts with a design rule that allows a lot of variation in foil shape, size and structure, as well as in the systems that control the foils and the wing. Coming up with the right solution that results in a fast boat across a racing wind range of five to 25 knots is a hell of a design and engineering challenge.

We learned pretty quickly that the fastest solutions were the most unstable designs. And the only way to keep the boat foiling was by making near-constant adjustments to the wing and appendages. The problem with that was that the rule only allows for controls to be adjusted by manual power. And it takes a lot of power to sail these boats fast.

So the guys supplying the power — the America’s Cup grinders — have to be incredibly fit. I’d put our guys up against any professional athletes now for overall fitness. They’re strong, they’re agile, and they need to be able to supply massive amounts of power into the hydraulic system for the full 25-minute race period.

When they do, we have the ability to trim the foils and the wing in a way that harnesses the power of the wind and converts it into speeds of more than 50mph. When you look at it that way, these boats are some of the most efficient machines ever built.

But once we’re out on the race track, you don’t think about that backstory. When we’ve done practice racing in our test boat — the AC45S — against the other teams in Bermuda, we’ve quickly learned that in reality these boats are a perfect tool for competitive match racing.

They’re fast, they’re very manoeuvrable, they’re challenging to sail at maximum efficiency, and when you make a mistake you get punished. The result has been close races with classic match racing moves and passing opportunities.

In the pre-starts, there’s a clear incentive to push a penalty onto your opponent or to get a leeward hook where you can leave the other guy head to wind as you turn down for the start line at full speed. That is classic match racing.

On the downwind legs, the leader must choose whether to sail to the course boundary to minimise manoeuvres, or cover the opponent when he jibes off. With foiling jibes, the manoeuvres aren’t as costly, but saving a couple of jibes is still a significant gain, so it’s not an obvious choice.

Upwind, the game is about smart course management and here the race course boundaries come into play. In the old days, as the leader, you’d try to push your opponent out to the layline early, in the hope that you could feed him bad air for a long tack to the mark (or force him to sail extra distance by overstanding).

Now the game is played on a very narrow race course. Hitting your laylines is still critical, but your opponent can look to force you into an extra tack with a dial-down near the top mark. But this is not an ordinary dial-down. This time both boats are probably going about 40 knots — that’s an 80 knot closing speed. You have to be pretty quick on your feet to make the right decision.

When we race in the America’s Cup this summer, I think the human factor is probably going to be more important than ever. But none of this would be possible if we didn’t have these incredible machines. I’ve never raced on a boat that is as challenging, rewarding and exciting as the new America’s Cup Class is. It’s going to make for a magical summer and the best America’s Cup yet.

First published in the May edition of Boat International US Edition.