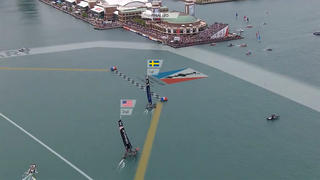 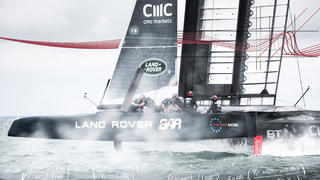 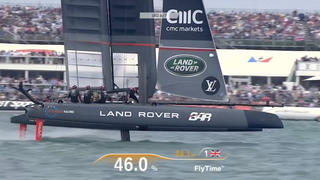 I probably say it as often as I read it — the America’s Cup is a technology game. A recent analysis by The Guardian of fan attitudes and awareness found that the word “innovation” is strongly associated with the Cup, and I’m sure that “technology” isn’t far behind.

I’ve written quite a bit about how we are using technology within the team, but it’s also impacting how we watch the action — and helping umpires decide who wins.

At the 34th America’s Cup in 2013 the introduction of LiveLine technology, which used augmented reality in the race coverage, made the competition so much more understandable for television viewers. The boundaries and laylines were made visible on the TV screen.

As the tool continues to develop it’s opening up the way we can talk about our sport, its strategies and tactics. Data such as average speed, distance sailed and the number of tacks and gybes completed on a leg by each competitor make it easy to see the boats that sailed smart and fast.

LiveLine has also changed the way the sport is officiated, with the umpires ashore using the same technology to make crucial rulings on everything from early starts to luffing incidents. Without this technology it would be almost impossible to race these cutting-edge boats confident of fairness. They are simply too fast and too manoeuvrable for on-the-water umpires to follow the action.

We know from other sports the trouble that can follow when umpiring decisions aren’t reliable; it’s the reason for the widespread trend of referees using video replays. The addition of Hawk-Eye to cricket broadcasting in 2001 was widely accepted, not just as added value for spectators but as an important aid for officials.

The same can be said for tennis and even football, the sport that held out longest against video assistance. I understand that the reason football resisted goal-line technology (which it introduced in 2012) for so long, and continues to hold out against video referees, is that it wants the game played on parks and streets around the world to be the same as the one seen in the stadium at the World Cup final.

This is an understandable desire, but important professional games that turn on questionable (or just plain wrong) refereeing decisions undermine the investment that everyone — athletes, managers, ticket-buying fans, TV rights-holders and sponsors — makes in the sport. The evolution of sailing that LiveLine has allowed has definitely taken our sport in the right direction.

There is so much competition for attention and spare time these days that all sports are having to adapt to keep people interested. Some new golf tournaments are even being staged with fewer than 18 holes to speed up the game. The Olympics, too, constantly changes and evolves with the introduction of new sports — and television viewers are often the driving force.

On the topic of the Olympics, huge congratulations to our BAR team member Giles Scott for winning the Finn gold medal in Rio — a great performance. With feats and professionals such as this we know there’s plenty to watch in sailing, but it’s not enough — we have to do what we can to make our sport attractive to both spectators and participants.

Technology has made these incredible foiling boats possible, and technology has helped to run the racing and make it entertaining to watch on television. I’ve no doubt that technology will continue to play a major role in where the sport goes from here.

The success of Pokémon Go has shown us just how powerful augmented reality can be, and visitors to Land Rover BAR’s Tech Deck or exhibition stands know all about our work with Oculus Rift and virtual reality. We are also using artificial intelligence in our performance analysis, and I can only wonder what impact all these technologies might have on the way the sport is played and watched in the future.

First published in the October 2016 edition of Boat International