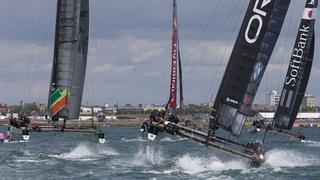 The America’s Cup World Series organisers have released information on the best way to watch all the action from on board your yacht at this year’s event in Portsmouth (July 21-24).

It was announced last year that a second Portsmouth America's Cup World Series would take place. During last year’s event, which was won my Sir Ben Ainslie's Land Rover BAR, more than 25,000 spectators watched the racing from private and chartered boats.

It is hoped that even more yachts will attend this year and there will be designated viewing areas around the course. This year’s course will be shorter than in 2015 and therefore there will also be an exclusion zone controlled by Portsmouth Queens Harbour Master.

"Inside the exclusion zone, the AC45 F will race on short windward — leeward courses and the Local Notice to Mariners will clearly show where the exclusion zone is positioned," the organisers said in a statement. “Team Origin on-water marshals will help spectators to get the best views and stay safely out of this zone."

If you are wishing to take in all the action from your own private yacht then you are encouraged to register your interest by emailing watchonwater@teamorigin.com with the type and size of boat, contact details for the skipper and the number of expected guests.

If you are looking to charter either a yacht or RIB for the event then Solent Rib Charters and Sunsail have been named as the preferred charter partners.

Last month Toulon was announced as the fifth venue for the 2016 America's Cup World Series. Other World Series events are also already confirmed in Muscat, New York and Chicago before the America’s Cup in Bermuda in 2017.