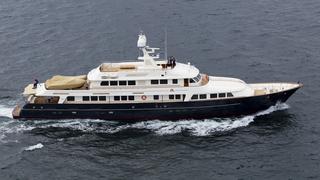 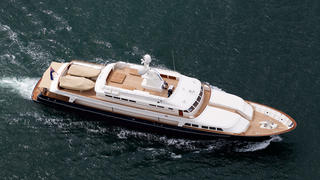 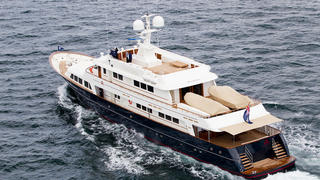 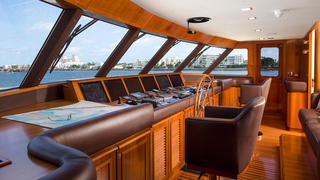 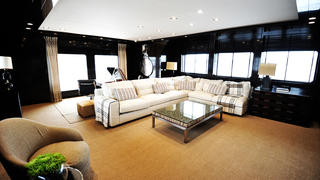 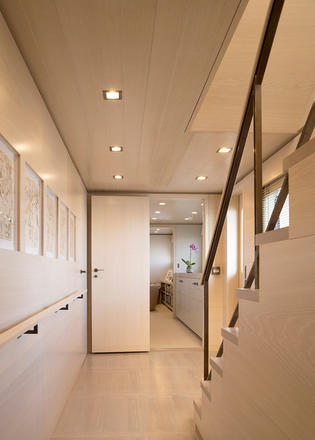 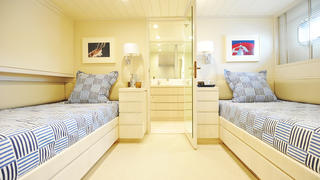 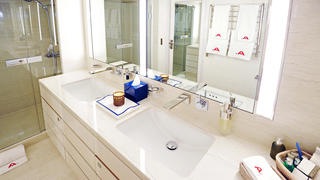 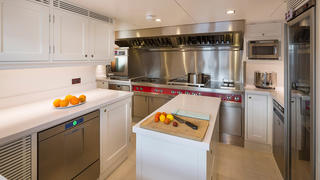 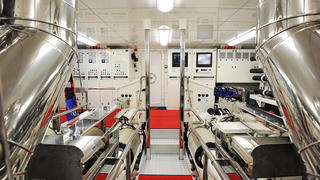 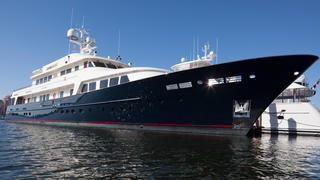 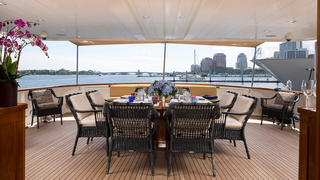 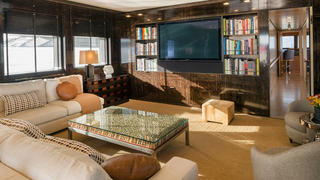 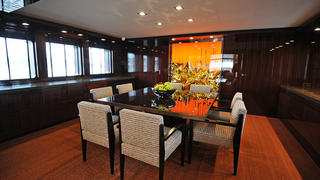 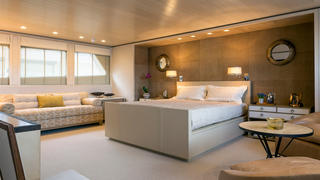 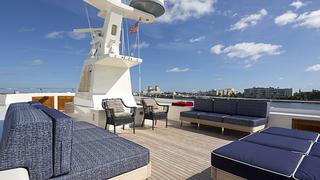 Some 35 minutes or so into my tour of A2 with Henk Wiekens of Pendennis Shipyard, we have just reached the foredeck and writer’s cramp is a distinct possibility. It is time to get a handle on the situation. "Henk, maybe we are going about this in the wrong way. Can you tell me how much of what I am looking at is left from the original boat?" I ask.

"This section of deck is original and the caprail," Wiekens answers, "and the wheelhouse windows and most of the hull…" He trails off, squinting in the bright Palm Beach sunshine, as he turns over the details in his mind. "It was a pretty big job; a rebuild rather than a refit."

Indeed. Expanding the main deck master suite to full beam, a 4.5 metre hull extension, gutting the interior and engine room. New power, new electrical, new management and navigation systems were on the list. Revamping the interior layout for a new owner’s lifestyle meant all the windows in the superstructure had to be repositioned as did all the interior stairways, boarding ladders and tender stowage. Which led to the inevitable question: why?

The short answer is that the owner’s current sailing yacht — rebuilt by Pendennis — is a 1903 schooner. To harmonise with the sailing yacht on those occasions when A2 would serve as a mothership, the owner sought a more classic style.

"He didn’t enter into the idea of having more than one boat lightly and he had very specific ideas about how the motor yacht (his first) would be used and what size it needed to be," Wiekens says. "In 2010 he decided to refit rather than build new. He sent us out to find a suitable candidate, one with sound structure but little to no value in the interior."

Pendennis found Masquerade of Sole in Palma. She had been launched by Feadship in 1983 as Circus II and in 1986 she became the first Limitless, then Masquerade and finally Masquerade of Sole, a six-cabin charter yacht. The owner bought her from the photos and specifications and the yard’s assurance that she held promise and value.

A structural survey assessed the integrity of the yacht, which in turn determined the extent of the work. Concurrently, there were several meetings with the owners, whose plans coalesced around larger outdoor living areas, improved water access and an open interior. With this information, Pendennis and BMT Nigel Gee, the firm tapped for engineering, recommended completely stripping out the yacht including crew quarters, guest areas and the engine room, returning Masquerade of Sole to bare bulkheads, steel hull and aluminium superstructure. In addition to adding length on all three decks, one of the largest structural changes was widening the forward section of the main deck superstructure to full beam, creating more privacy and space in the owner’s suite.

The superyacht interior now includes a much larger main saloon with the addition of a second lounge area, primarily for the owner’s use, on the upper deck. A2’s exterior social areas also benefited from the transom extension with increased alfresco dining space and twin staircases replacing the original single ladder for more convenient access to the new swim platform.

The scope of the project included re-engineering all systems, installation of new deck equipment, modern bridge technology and state-of-the-art AV equipment throughout. The owner’s brief also included increasing both the range and cruising speed of the luxury yacht. New MTU main engines now give A2 a steady cruising speed of 14 knots rather than the original 12 and a maximum of 15.8 knots. Fuel consumption is dramatically improved, increasing her range from 3,500 nautical miles at 12 knots to 4,200 nautical miles at 14 knots.

"The owners liked the profile of a 1980s Feadship, but wanted the conveniences and amenities of a new build," says Wiekens. "One of the things that’s changed in the last 30 years is expectation of headroom. He wanted the new interior optimised for greater headroom throughout."

A2’s interior supports the ‘period’ of the yacht as well as contributing to a space where the owner, family and guests can relax. Conditioned air falls into each room through simple slits in the overheads with returns hidden under skirting boards or furnishings, eliminating distracting grills. Planked dark wood floors already look mellow and simple antiqued bronze light controls are perfect for the concept. Working on a theme of contrasting light and dark, Marino mixed materials as diverse as embossed, painted French leather wall coverings and straw marquetry with oak, limed teak, white satin-finish paint, high-gloss palm and rosewood.

The interior design is about creating a visually exciting journey, according to Marino. It begins when you enter the A2 from the aft main deck aft doors. Immediately you are thrown into light with bleached oak bulkheads and panelled overheads. The clean-lined furniture is positioned in a way that draws your eye forward to the dramatic dining room beyond, in which glossy rosewood forms the backdrop to a striking piece of mixed media art by Anselm Reyle, which sets the tone for the rest of the yacht.

In the now-spacious master suite, Marino chose multiple shades of white and bronze to create the feeling of a retreat and married the wooden and metal borders of the bulkheads with a textured leather wall surface. The furniture on superyacht A2 is a mix of leather and bronze, a key piece being a chest of drawers featuring detailed bronze handles and parchment drawers designed by Parisian sculptor Ingrid Donat. In the en suite, Roman Classico travertine stone adorns the walls, floors and surface tops.

Directly in front of the door to the owner’s suite, a straight run of stairs hugs the starboard side of the superstructure and leads directly to the owner’s lounge aft of the bridge. Dark palm wood joinery and neutral upholstery accent key pieces: an aluminium sculpture by Cesar and a coffee table by Do Ho Suh. A leather desk has pride of place. It is a room that can work as a private saloon for the couple or as a family space. The enlarged aft deck serves as the perfect venue to observe regatta action.

On the lower deck of A2, one of the four aft guest suites is now a pantry, laundry and dayhead that connects the guest lobby to the lazarette and swim platform. Pullman berths in two of the three cabins bring the number of berths back up to the former count. An additional guest or nanny cabin is forward of the engine room with access via the crew stairs, yet it is separate from the crew mess.

The complete systems upgrade has left the luxury yacht more akin to a newly build, making the ongoing engineering maintenance program much lighter than usual for a vessel of this age. Although the owner has no intention to charter, the yacht remains in class and was brought up to current LY2 standards.

"We are pleased that we were able to make all these modifications and deliver a yacht that meets the owners needs in 18 months, while keeping it under 50 metres and under 500 gross tonnes," says Wiekins.