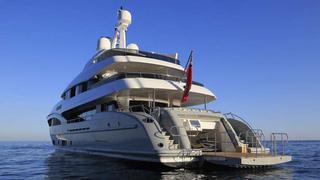 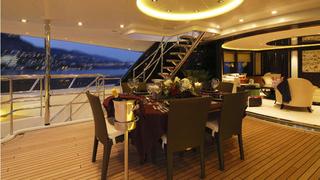 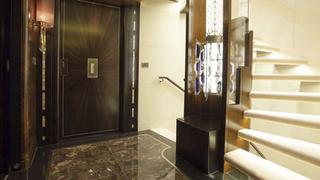 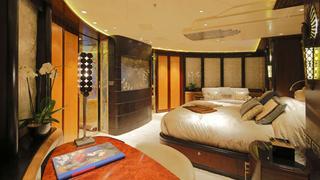 Apostrophe: the superyacht that took five years to build

Consider for a moment this yacht’s name: Apostrophe. On the one hand, it is an omission or something missing. Considering how long this yacht was missing from her owner’s life, the name seems cleverly appropriate. The design contract for this 40 metre tri-deck, which launched in spring 2013, was signed in 2007 and Moran Yacht & Ship helped the owner contract its build to Hakvoort Shipyard in The Netherlands in 2008. Five years is a long time to wait.

The wait, however, is a key part of the yacht’s subtext. Knowing he wanted to step up from his 20 metre motor yacht, the owner began to research. He considered a yacht size that would fulfill his family’s cruising requirements, ‘family use’ being the key words for this private yacht rather than quantity of rooms or toy-carrying capacity. In his search for inspiration he found the aesthetic he was looking for in the 68 metre Kismet and the 48 metre Flying Eagle. Then he tracked down Kismet’s designers, Pascale Reymond and Andrew Langton, of Reymond Langton Design in the UK.

‘He wanted an exterior that was highly contemporary and curvaceous,’ Reymond says, noting that sometimes those words are used in opposition. In developing the design vocabulary, recurring themes emerged: round, like the glass art pieces he collects, and curvaceous, as in the geometry of art deco. ‘As we explored the ideas of surfaces and materials, it was clear the only thing he was interested in restricting was the size of the vessel. Every suggestion by the design team for interior and exterior was accepted, regardless of cost,’ says Langton. ‘He said he did not envisage making a yacht of this pedigree more than once and if he was going to do it, he was going to do it right.’

The design began in 2007 and the keel was laid in 2008 just as an unforeseen economic collapse was spreading around the globe. Eventually its tentacles reached both the shipyard and Apostrophe’s owner. While the Hakvoort family were working on a strategy to keeps their craftsmen busy, Apostrophe’s owner contacted the yard with his own issues. ‘He was determined to finish the yacht exactly as it had been designed and contracted,’ says Lucas. ‘He would not step down a penny in materials or details, nor stop the work. We would just go slow and Hakvoort also negotiated to do the work with its own team.’

To keep the interior design of Apostrophe from becoming too retro, there is an extravagant use of leather with detailed stitching to contrast with the dark woods in a more contemporary way. ‘We did not want to duplicate deco,’ says Reymond. ‘In fact, if you looked up pictures of actual art deco rooms, you wouldn’t find anything like this. It’s more like you would imagine deco to be seen through the filter of our time.’

One of the truly contemporary aesthetics of the yacht is its blending of interior and exterior spaces starting at the aft main deck’s sliding doors. The panels of tinted, curved glass appear frameless and floating above the teak deck. In fact, the frames are hidden above, below and behind the tempered glass, with the white-painted superstructure neatly wrapping and masking the door tracks. The curved doors of _Apostrophe _open to a saloon of circular seating, round tables and undulating overheads embracing curved cabinets and art niches.

While many superyachts are forced to tie stern-to because of their size – their designers eschewing the traditional starboard amidships entry for reception areas aft – Apostrophe has no such encumbrance. It would be a shame not to board at her starboard foyer, for it is a showpiece that captures the essence of Apostrophe in microcosm. Accessed through etched glass doors framed by boldly figured wood veneers above a richly veined brown marble floor, this area features an open circular stairwell to the guest accommodations below and the upper saloon above. Almost-white carpeted stair treads are suspended between a leather-panelled wall and a wood and glass pillar framing a ‘chandelier’ from Crystal Caviar.

Forward of the dramatic lobby on the main deck is the owner’s suite, entered through a short hall and a private office area, which open onto a full beam suite, itself given a rounded shape by following large curved windows port and starboard. ‘The owner loves curved glass,’ Reymond says. ‘He was adamant about having curved glass in his suite. Figuring out how to accommodate that within a contemporary shape that serves to visually lengthen the superyacht was the key to the entire profile.’

The atmosphere is charming and stylish on Apostrophe, a deco-style retreat in rippled sycamore stained in warmer tones than the guest areas. The slight loss of area from the choice to follow the curved windows is of no consequence and creates hidden storage spaces to supplement the walk-in wardrobe. The centrepiece is the platform bed and its architectural headboard/canopy in 1930s style reminiscent of the Empire State Building. ‘You won’t find a bed like this in the deco era, but it reads deco,’ explains Reymond.