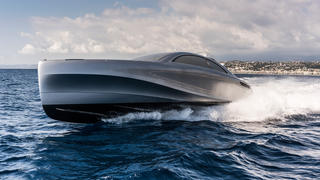 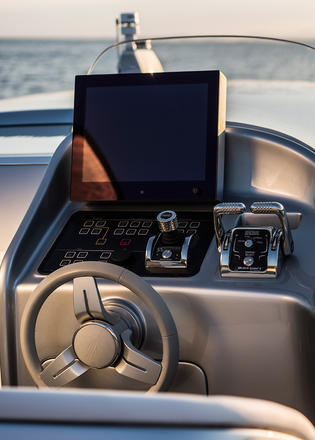 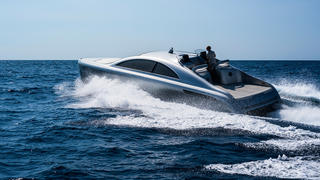 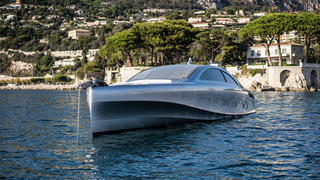 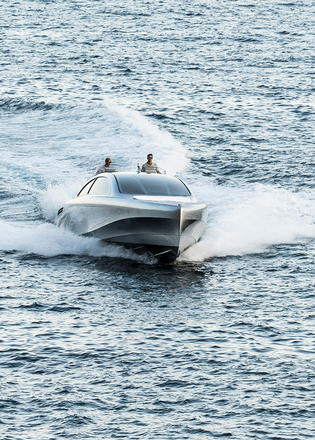 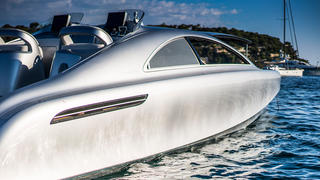 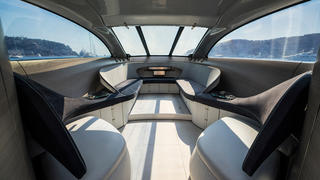 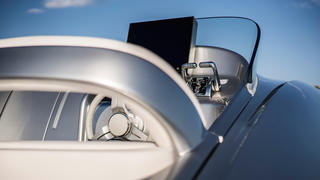 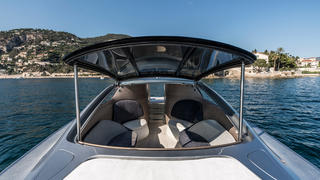 At the 2012 Monaco Yacht Show, naval architect Martin Francis dragged me to one side and revealed that he was working on a unique boat project with some really interesting people. “You have to see it,” he whispered, excitedly. Four years later I’m at the wheel of a very expensive, very powerful Mercedes AMG s63 Cabriolet, finally on my way to do just that.

I have been invited by the car company to the South of France for a trio of tests — featuring the AMG supercar, an Airbus helicopter featuring a Mercedes-Benz Style interior, and finally the boat that had so animated Francis. For most of the 100 or so journalists in St-Jean-Cap-Ferrat, the helicopter and car are the main attractions. But the boat is all I see.

Ever since that hush-hush conversation in 2012, I have been following its build and am the only writer to be given behind-the-scenes access to the Arrow460-Granturismo — a collaboration between new shipyard Silver Arrows Marine and Mercedes-Benz Style, with input from Francis, designer Tommaso Spadolini and Van Oossanen Naval Architects.

In the car world, it is common for a project to be in development for five years or so before the prototype is unveiled. In the boating world, no builder would tie up design capital that long, which makes this boat all the more intriguing.

The idea was conceived in 2009 by Gorden Wagener, vice-president of design for Daimler, Mercedes’ parent company. Mercedes has numerous design centres but it was the Advanced Design Centre for Mercedes-Benz Style on Italy’s Lake Como which developed Wagener’s idea: what if Mercedes-Benz Style designed a boat?

The company had ventured on to the water only once before — in 1888, when it designed and built a launch for Otto von Bismarck, equipped with Gottlieb Daimler’s early one-cylinder internal combustion engine. It burned benzene for fuel and was named Mercedes, after the daughter of one of his engineer investors.

Some 121 years later, the Lake Como style gurus began sketching, borrowing liberally from Mercedes’ famous Silver Arrows racing cars of the 1930s and from the iconic 1954 gull wing 300 SL. Soon the group expanded to include former automotive journalist and avid boater Paolo Bonaveri, and entrepreneurs Jacopo Spadolini and Ron Gibbs, who investigated the niche for an ultra-exclusive, innovative Med-style cruiser.

They formed the UK-based company Silver Arrows Marine to build it and brought in Tommaso Spadolini and Francis to direct hull and engineering concepts. A full-scale prototype of the open hull was built and tested in Turkey.

Mercedes began suggesting innovative features, from electric windows to a disappearing swim platform and a vanishing bed and table. A pop-up saloon roof and other features were added. Van Oossanen refined trim and balance, highlighting comfort instead of autobahn-like speeds.

The dayboat concept was becoming multifunctional; they began to think of it as a grand touring car, a granturismo. The name stuck. On the technical side, Swiss composite expert Carboman pushed every element from skin laminates to the 3D engineering of the systems. At an overall length of just 14.2m, the R&D per centimetre is staggering.

My first impression as I pull up to the quay in the tiny French port is that the boat looks exactly like its rendering, which rarely happens. “Giving shape to a boat is a dream come true for automotive designers,” says Wagener. “We applied the refined design genes of our sports cars. The results are an automotive style, open-plan cabin, high-tech materials and, in place of a bathing platform, a terrace.”

The “terrace” is out when we arrive — it is truly too large to call a bathing platform. At the touch of a button, it retracts into the hull between the deck and propellers.

Despite the fact she’s carrying more people than she was designed for, as we round the breakwater the captain nudges the throttles ahead and in the blink of an eye we are heading into the sea with no pounding.

“Faster,” we urge. He complies and we spin doughnuts around the 92 metre Feadship superyacht Royal Romance setting her anchor nearby. I choose a spot behind the captain in an attempt to stay dry but it turns out I could be sitting anywhere: there is very little spray.

The boat is so new, splashed only three days before, that her interior is not completely fitted out, a factor that cuts short our sea trial given the number of people aboard. I don’t get chance to take the helm and I wish everyone else would evaporate. At our 28 knot cruising speed, I could have been in Monaco in no time.

Mercedes does not make engines that could be marinised to fit the horsepower and torque parameters and profile of the Arrow460 so a pair of six-cylinder 480hp Yanmars have been installed. For the production series of the boat soon to begin lay-up at Baltic Yachts in Finland, next generation Yanmars meeting US emission regulations will be fitted. They have more power and weigh 100kg less and should provide a more muscular top speed of 38 knots.

The boat’s layout is like no other. Instead of trying to create a seating area with a bimini top for shade when anchored, the social cockpit is below in a space with full standing headroom. To enjoy it alfresco, a big window section of the coachroof lifts up on struts — a modified sunroof.

Like a car interior, everything is built-in, and storage, the head and mini galley are hidden away. Michele Jauch-Paganetti, studio manager of the Mercedes-Benz Advanced Design Studio in Como, says: “We wanted [the passengers] to be protected from the elements but not feel enclosed. The silver body is minimal and yet confident. In contrast, the interior is warm with voluptuous shapes.”

Steffen Köhl, advanced exterior design director for Mercedes-Benz, adds: “Modern luxury is a rare thing — it is clarity, calmness and purity. The product doesn’t interrupt you. Intellectually it touches your senses. Luxury makes you say: ‘I want to touch it, I want to fit in it, I want to own it’.”

Six years of incubation have delivered a very different boat from anything currently on the market. Silver Arrows Marine clearly thinks it’s found a niche and is producing a limited run of 10 Arrow460s at Baltic, each coming with a seven-figure price tag. But who cares about that, especially now you can drive to the dock in your AMG s63 Cabriolet, go for a cruise in your Arrow460-GT and head for dinner in the Mercedes-Benz Style chopper.

First published in the March 2017 edition of Boat International