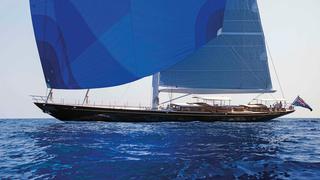 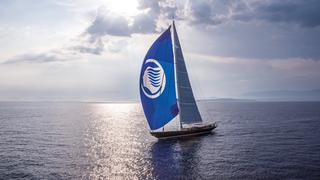 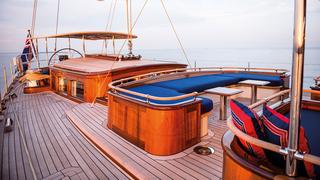 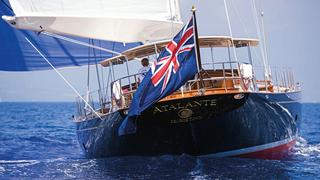 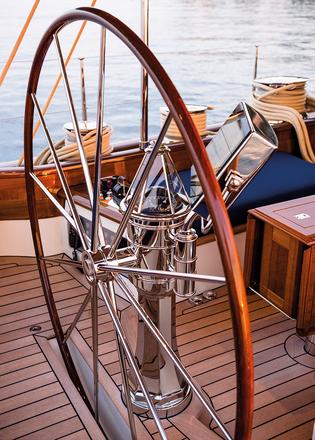 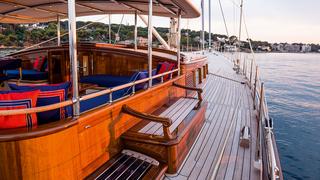 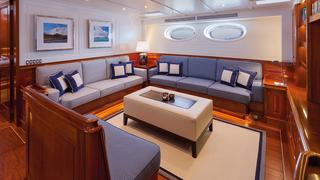 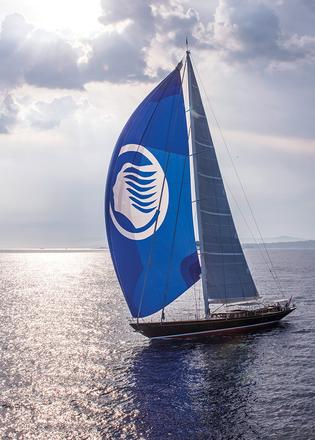 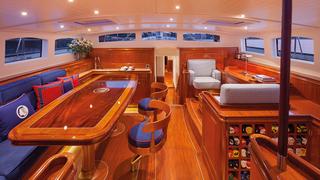 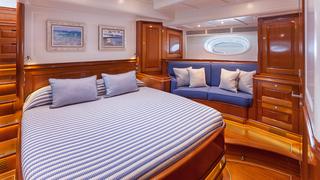 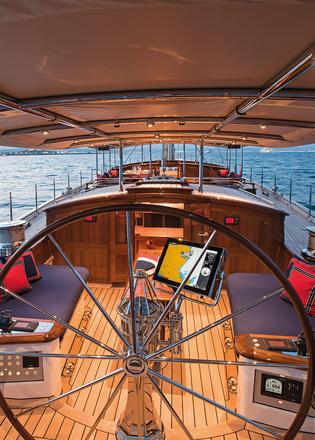 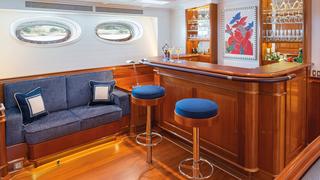 Retro style and good looks, wedded to modern technology and performance, is Andre Hoek’s stock in trade. And he’s done it again, with the new 38.8 metre Claasen superyacht Atalante.

Atalante is a modern classic

Everyone loves a design from the “classic” pre-war era, be it a car, aircraft or yacht. Anywhere these machines gather – at America’s Pebble Beach Concours d’Elegance, England’s Goodwood Revival or the international Panerai Classic Yacht regattas – they invariably draw a huge crowd of enthusiastic onlookers. We love these vintage models for their age and perfection, for their highly functional design and, above all, for the beauty in which their long-gone designers wrapped the technology of their age.

Owning such a classic – particularly a large classic yacht – is, however, quite a different matter. Sizeable examples from respected designers in pristine condition are rare and prohibitively expensive to acquire, and the cost of proper care and maintenance is exorbitant. More significantly, their performance and standards of comfort often remain locked in a bygone age. They are better, perhaps, to admire rather than possess.

But there is an alternative, in yachting at least: the “ Modern Classic”, the type of craft whose visible lines reflect the magnificence of yachts from the first half of the 20th century. On the surface they reflect the beauty, simple elegance and varnished brightwork of a true vintage. Modernity is concealed beneath the waterline with a highly efficient, state-of-the-art hull form, with slimmed-down appendages resulting in excellent performance. Similarly, their interiors provide all the comfort of a modern yacht, as well as totally reliable machinery and equipment.

Designing such yachts, however, is not straightforward. Encapsulating the authentic spirit of a classic yacht within a modern craft is an art that only a few contemporary designers have mastered. Pre-eminent among these, perhaps, is Andre Hoek, whose Netherlands-based design studio has specialised in modern classics since its foundation in 1986, a time when its stock in trade was improving the performance of traditional Lemsteraken – a traditional Dutch fishing vessel now raced by enthusiasts – by using tank-testing and velocity prediction programs to reshape their lee-boards, rudders and mast positions. Soon he was designing new Lemsteraken, and such was his success that some 300 of these vessels now have Hoek’s name on them.

By 1988 the studio had developed a completely new semi-production series of yachts, the Truly Classic, whose designs were inspired by Hoek’s love of yachts drawn by famous designers from the early 20th century, such as William Fife, Charles Nicholson and Nathanael Herreshoff.

“My aim,” explains Hoek, “was to combine the best of the classic and current eras, with drop-dead gorgeous looks and a modern hull form to ensure sublime performance.” He started off with a 20 metre Truly Classic that first proved its pedigree by winning its class in Antigua Classic Week three times in a row. The success that followed can be judged from the 100 or so modern classics delivered since then by Hoek Design, of which 33 are Truly Classics.

Atalante was built for an experienced owner

The latest and largest launch in this Truly Classic series, the 38.8 metre Atalante, was created for an experienced client who has sailed since childhood. His previous boat, also named Atalante, had been a smaller 27.4 metre Truly Classic, launched in 2009 by Claasen Shipyards. Although this yacht had seemed large at the time, the owner liked it so much that he was soon considering a larger, faster and more spacious replacement, albeit with the same number of guest cabins as the first, but with enlarged crew and service areas.

My aim was to combine the best of the classic and current eras, with drop-dead gorgeous looks and a modern hull form to ensure sublime performance

“The measure of success of this first Atalante,” explains her owner, “was that I wanted my new yacht to be built by exactly the same team that had previously delivered such a great outcome” – this team being Nigel Ingram from MCM, acting as the owner’s project manager, and Victor Weerens as Claasen’s project manager.

Although this was, from the outset, to be another semi-custom Truly Classic series hull, the design-development process was much the same as for a fully custom yacht. Starting out at 35 metres in length, Atalante gained another 3.8 metres by increments, to expand crew accommodation to provide the option for five crew in three cabins when chartering, rather than the originally planned four in two cabins. This decision had other benefits in that the “reserve” crew cabin could double as a captain’s office.

Seen on the water, there are few clues that Atalante is a brand new yacht, apart from her glistening perfection. Knowledgeable observers, however, will immediately identify her spars and continuous standing rigging as carbon and her sails as North’s latest 3Di technology, while her fully instrumented steering console set in her aft cockpit is another giveaway. But elsewhere, from the elegant curves of her bow and sheerline, teak-laid decks running past low, traditionally shaped teak deckhouses, to her elegant, engraved stern, she is the very picture of a classic yacht.

Throughout her design and build, the guiding principle was “keep it simple”. For this reason the modern fin-and-bulb keel is of fixed 4.5 metre draught, while on deck, straightforward thinking is seen in the choice of her traditional Park Avenue boom and slab-reefing system, along with the six large sail winches that border the aft sailing cockpit serving the furling genoa, staysail and gennaker. It is also epitomised in the single captive winch that controls the mainsheet which, being sheeted from the mast rather than from the boom end, is positioned by the mast’s foot.

The layout of the deck is well thought out, with all the sailing action taking place in the aft cockpit, from where there is direct access to the aft deckhouse and its comprehensive navigation station. Notably, the single wheel, which operates a totally manual chain-and-wire system to the quadrant, has perfect all-round visibility. Just forward, the main cockpit – well protected from the elements and shaded beneath a sturdy bimini – offers a completely safe, spacious and supremely comfortable lounging and dining area for those not involved in actually sailing the yacht.

While the interior of this new Atalante – also by Hoek – very much reflects the facilities of the earlier yacht, the added volume offered by the 38.8 metres allows a much more spacious atmosphere. Its traditional feel is enhanced by Claasen’s exemplary mahogany joinery and soft furnishings from London-based Hamilton Weston. Down a few steps from the cockpit, the main deckhouse offers excellent visibility from either a seated or standing position, and much the same facilities as the cockpit, but within a sheltered and air-conditioned environment. Superb detailing can be seen everywhere, from the impeccable fitted storage for cutlery and crockery, to the dining table’s carefully designed cantilevered stools that twist and store close to the table when not in use, as well as in the soft patch beneath the table and its twin in the deckhead that allows for easy removal of larger components from the engine room beneath.

From the deck saloon, stairs to fore and aft lead down to the lower deck. Reflecting the arrangement of the earlier Atalante, it was decided from the outset that an owner-aft, crew-forward layout would best meet the owner’s needs. A delightful lower saloon is positioned on the lower deck, aft of the main saloon, an unusual choice since most saloons are found forward of the deckhouse. This acts as the social hub of the yacht, offering a large conversation/television area to port and a compact but fully functional bar to starboard, equipped with ample storage as well as a fridge and icemaker.

The saloon also serves as a foyer to the master cabin in the stern. Indeed, its positioning allows it to act as a private sitting room if circumstances require, while the master suite itself offers a sizeable bed flanked by a settee and dressing table, superb storage, including a full-length wardrobe, a shower room and a separate head. A stair leads up to the aft deckhouse and navigation cockpit, providing both an escape route and access to what might become a private owner’s cockpit when the yacht is at anchor.

the owner of Atalante

Forward of the deck saloon are two en suite guest cabins, a double to port and a twin to starboard, each lit through a sizeable portlight. Beyond are the crew quarters, where the standard of joinery and decoration remains unchanged. Captain James Prince and his wife Kate, who served aboard the earlier Atalante, drafted much of the layout of this area, creating a large open living area in which the mess table can adjust in height and fold for dining or feet-up relaxing.

Technically, the yacht is as one might expect from Claasen – faultless. Few yachts of this size can boast a control room like Atalante’s, while the engine room itself is laid out in optimal fashion with comfortable kneeling headroom in all areas, some with more. Power is provided by a pair of Northern Lights 32kW gensets and propulsion by a single Scania 328kW diesel. Notably, her service battery bank, comprising 30kWh of 48V lithium batteries, allows the yacht to run in silent mode for up to eight hours.

Atalante put to the test

On our test day, there is just six knots of wind ruffling the Mediterranean. In this zephyr she easily accelerates to 5.5 knots on a close fetch, with finger-tip control on the wheel. The captain reports that she has so far achieved a best speed of 13.4 knots on a broad reach, unless you count the 17 knots surfing on a wave off the Portuguese coast! Her classic hull form, with long overhangs, also means that her motion at sea is gentle, reducing susceptibility to seasickness, while at anchor she is quiet, without any slamming of waves in the stern areas that cause sleeplessness in many modern hulls. Trimming is straightforward in view of the three ergonomically positioned Lewmar winches, which can be used in either cruising or race mode. Other hydraulic functions can be operated by remote control during short-handed sailing.

Atalante is equally successful when cruising the oceans with the owner and his family, as she is certain to be during superyacht regattas. As Andre Hoek was keen to point out: “Atalante represents the best of both worlds. She performs like a modern thoroughbred and blends this with the timeless appeal of a classic yacht.” Her owner certainly agrees: “On the original Atalante, I enjoyed close contact with the water and the ability to spin the boat on a sixpence when racing. I did not want to lose this on the new boat and Andre has delivered beautifully on both counts.”