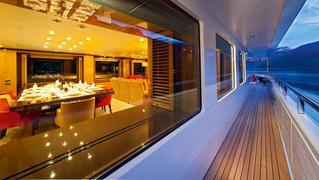 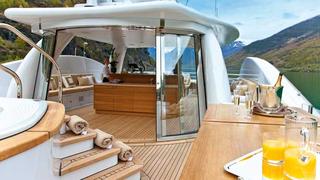 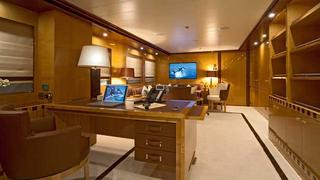 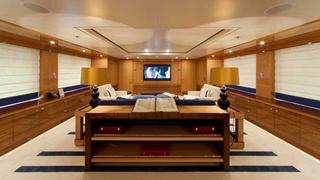 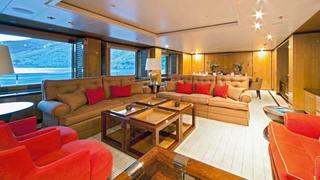 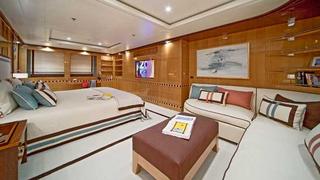 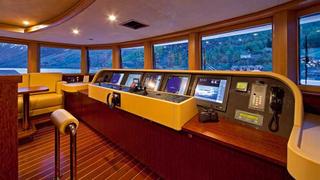 Bel Abri - the semi-custom yacht with its own style

The 52.3 metre motor yacht Bel Abri was the sixth yacht to be launched in the successful Amels 171 series, but the first one destined for charter use from the start, being available initially through Imperial, which was closely involved in the construction project and managed the build for the owner.

Like her sisterships, Bel Abri‘s ‘athletically feminine’ lines were designed by Tim Heywood who conceived the yacht’s sweeping curves that are reminiscent of Italian sports cars of the 1930s, and her interior design is the work of Laura Sessa.

The structural design uses the well-established plan of a raised fore-body that drops down to main-deck level amidships, the decks being connected by the fluid curves created by the windows of the owner’s full-beam suite. The bridge deck, on the other hand, has a full walk-round, which connects the Portuguese deck that wraps around the bridge to the spacious open-air entertainment area aft. The extended sun deck of Bel Abri – shown in this video – is partly concealed by curvy raised bulwarks that swell up alongside the mast arch to create an area that is shaded and protected from the wind by glass doors. With a generous-sized pool and sun pads forward, a bar in the centre and sunloungers aft, this deck provides the full range of outdoor relaxation.

The placing of the engine room in the centre of the lower deck gives the best fore-and-aft balance while the guest cabins are in the area of least pitching force.

Tenders are stowed on the foredeck in tubs behind deep bulwarks so you cannot even see them from alongside, although this does rather dictate the size and shape of the tenders. The forward signal mast also works as the crane to launch the tenders. This can also be done when Bel Abri is moored stern-to the quay. Other sports equipment such as jet skis and diving gear are stored in a lazarette connected to the aft boarding platform.

Despite being the first Amels 171 to be destined for charter, it was hardly necessary to alter the layout as features that are important for charter such as good crew quarters, galley and laundry were already in place. One fairly major change was deletion of the small cabin next to the owner’s suite, the space being used to create a larger study/sitting room.

This had the effect of changing the guest/service ratio to 10/12 which is certainly generous. Other small improvements included a better-equipped pantry, a larger spa pool that a private owner might also specify and a wide selection of water toys to amuse the guests.

For Bel Abri interior designer Laura Sessa used a modern Italian style, which is inspired by the colour and warmth of the Mediterranean.

She has personal experience of sailing yachts and has applied elements of sailboat interior design to enhance below-deck spaces, making them seem larger, more open and more inviting. ‘Overall, I wanted to form serene spaces that create the mood of an island retreat or holiday home by the sea and I am very happy that the owners of Bel Abri responded positively to my philosophy,’ she explains.

Flat panels of high gloss wood have been carefully selected so that each deck on Bel Abri has an individual palette: in the upper saloon, teak, anigre and zebrano with woven leather wall panels. In the main saloon maple is the keynote timber with the dark-coloured sucupira as the contrast.

The owner’s suite is exceptionally spacious thanks to the enlarged study which transforms it into something more like a gracious library, complete with comfortable chairs and a wall of bookcases. The bedroom also has a seating area and a single large bathroom featuring a bathtub with a view out to sea. Also in the guest en suites, a most unusual stone named ‘stone wood’ is used for counters. It looks just like wood, complete with a streaky grain effect.

Access to the four guest cabins is via a staircase in the main saloon – another classic feature – which has the knock-on result that there is no need for a glamorous main hallway amidships.

With Amels yachts, one does have the feeling of being aboard a small ship, especially in the bridge area which includes not only a small communications centre but an office space outside the captain’s cabin. For guests on board Bel Abri who like to see what is going on, there are a pair of seating areas in the corners of the bridge designed so the watch officer can see over the heads of people sitting there.

There is no doubt at all that Bel Abri and the Amels 171 in general is a very successful formula. This premium semi-custom yacht has all the advantages of a stylish and personalised custom yacht but all the benefits of a finely honed platform from which all ‘bugs’ have been eliminated.

Amels Limited Editions  bridging the gap between custom and semi-custom