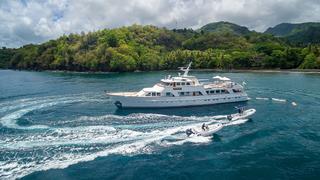 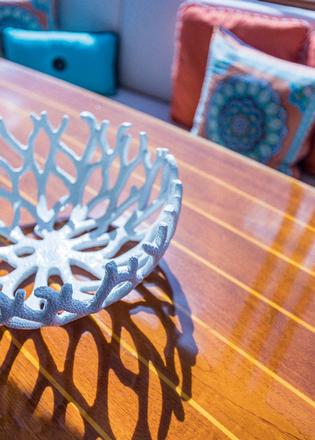 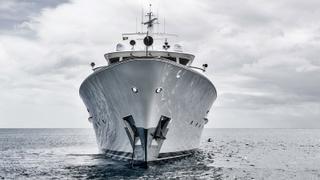 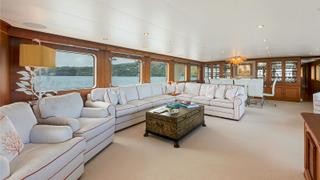 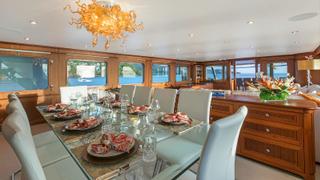 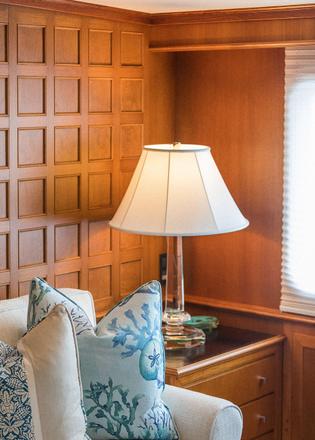 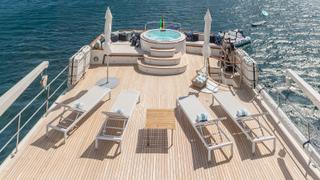 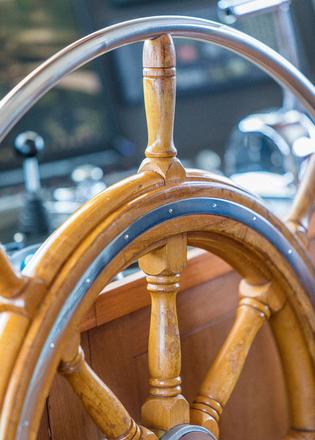 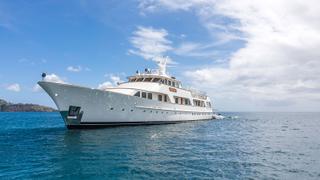 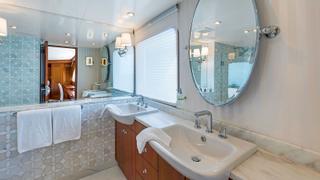 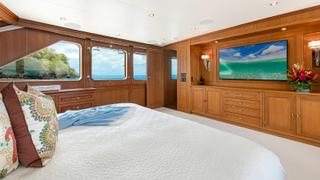 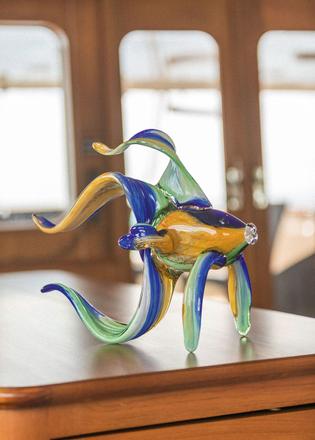 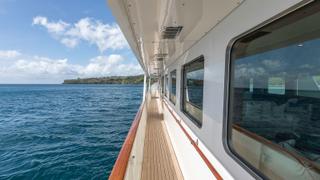 Snow and ice weren’t foremost on the minds of Berilda’s owners when they first laid their eyes on a classic 38 metre Feadship for sale in the north-east US in 2015. “They had visions of sandy beaches and rosé and it turned out to be rattle guns and welding torches in Maine for a winter,” says the yacht’s captain, Jacob Ewing.

What the new owners anticipated would be “a paint job and a spruce up” on the pedigreed steel yacht they had just purchased turned into the first 14-month phase of a major multi-yard superyacht refit project.

A second three-month refit period took place at the Rybovich yard in Palm Beach this year, after a shakedown cruise from Maine to Grenada in 2017, during which the owners got to enjoy their yacht and make plans for further updates.

A large chunk of the work was carried out at Front Street Shipyard in Belfast, Maine, where the yacht had been hauled for the survey. Front Street Shipyard is a relatively young yard with a new build division and several refits to its credit. Although it was a long way for them to travel, Ewing says the yacht’s owners liked the idea of keeping a small town employed. What they did not expect was how long Berilda would remain in Maine.

The survey had overlooked issues deep within the older lady’s underbelly. Brought on board to supervise the refit, Ewing had candid conversations with the owners. Hull problems had been fixed with double plating in some areas, “essentially a ‘Band-Aid.’ We replaced nine metres of steel at the stern,” says Ewing, who sent samples of steel to match with the modern-day metal.

Worst of all, the yacht was not safe to cruise. “There was no bilge system, no fire system on the boat that functioned,” the captain says. “We worked out a list and prioritised things based on safety, functionality and cosmetics.”

Take a closer look at the refitted Feadship superyacht Berilda

The owners and the captain came up with a plan for a several-phase refit, making time for them to enjoy the boat between yard periods. “Basically she’d been let go,” says Kristine Williams, who owns the yacht with her husband and is handling the redesign.

“Bringing back an old boat has to be a labour of love,” Ewing says, and it seems like the new owners have plenty to give. The news may not have been what they wanted to hear, but they delved deep into the project, determined to make Berilda safe.

“Even if we had been disappointed and wanted to sell, you don’t sell a boat that is unseaworthy,” Williams says. But they also saw an opportunity to make the layout work better for their family and eventual guests and committed to bring back the steel and aluminium yacht’s beautiful and occasionally colourful past.

The yacht was delivered in 1978 to E Clayton Gengras, a self-made millionaire who built his empire by selling cars, beginning with the Stutz Bearcat before World War II. He named the Feadship, designed by De Voogt Naval Architects, Claybeth in honour of his daughters and used her primarily for family and to entertain political friends in Connecticut.

One of those friends was Malcolm Forbes who bought the vessel a few years later. As Highlander IV, the yacht entertained some notable names. Princess Margaret, sister of Queen Elizabeth II, once attended a party on board. Forbes sold the boat four years after buying it, because as he reputedly told one guest, “the ashtrays are full.”

Smoking on board was permissible but it was subject to strict rules. Berilda’s current captain found standing orders from that period. “It says no smoking in the main saloon; smoking in bunkrooms after 6pm prohibited. It’s definitely dated, but it’s the time when smoking was allowed on airlines — it’s a bit of a trip,” he says.

Over the years, the yacht was also known as Sharon S, The Virginian, Lady Allison and Sirenuse. As Sirenuse, she underwent a yearlong refit in 2004 in anticipation of far-flung trips in the Pacific Ocean with a family and teachers. At that time a larger bunkroom for the kids and a small darkroom were added.

On a more colourful note, daredevil Evel Knievel once chartered the vessel, making about $50,000 worth of unauthorised charges, according to Evel Incarnate: The Life and Legend of Evel Knievel by Steve Mandich, and blamed his behaviour on the painkillers he was taking when the charter company sued him.

While they are respectful of the history, the owners did not want a museum feel or a jarring modern interior that would disagree with this Feadship’s classic looks. One of Berilda’s great assets is that her successive care-takers made no changes to her exterior styling, which is authentically graceful.

With her new steel plating and efficient slow churning Caterpillars, she proved to be the great little ship her new owners had wanted — incredibly solid and steady. During their shakedown cruise, however, the original Vosper stabilisers started acting up. “We ran three-fourths of the season on one fin, and did St Vincent and Grenadines all the way back up without stabilisers. I am happy to be redoing the system, but that it was feasible is a testament of how solid they built the boat in those days,” Ewing says.

Berilda's owners decided that they wanted to replace the system with brand new Quantum fins and to redo the bridge, which had been left alone in the first yard period. Back in Florida, the captain went to Rybovich to discuss retrofitting the new stabilisers. When the yard told him the work would take around 15 weeks, the owners decided to check several more items off their to-do list.

Back on the hard in August, Berilda was once again opened up. “At the moment the engine room is almost empty, except for the two old Cats,” Williams said when we spoke in early October. In addition to the stabilisers and the new electronics in a bridge designed in keeping with the boat’s older style, a new shore power system was added. In the interior, a VIP bathroom, the galley, the crew heads and the captain’s cabin were all gutted, redesigned and rebuilt, again in a way that respects the yacht’s heritage.

“We are taking care of all the underpinning that will make her super safe, so what we really are doing is stuffing her with the latest technology, but what my husband and I love are the classic lines and the feel of an older boat — one that has tons of character,” she says. “There are a number of lovely yachts out there and obviously huge ones, just gorgeous, but we wanted something for us, for our family.”

François van Well from Rybovich, who for many years was a director at Feadship, says: “It is rewarding to work on a project that has history, with new owners who recognise the legacy and carry on with it. The owner is basically doing all the interior decoration and design herself and she has a great sense of style. It’s a pleasant, family oriented boat, open and airy. It’s that family feel that really attracted us to the project.”

In addition to being a solid and graceful little ship, Berilda has great interior volume for her length. “If you wanted to rebuild this size boat today, you would have a lot less interior space because the new regulations have led walls to be thicker,” Van Well says. “There is a true benefit in restoring an older boat.”

Part of the extra space also has to do with what the captain calls “the old-style hull shape” and the refit’s improvements. For example, previous refits had added layers of materials over the original fabric-covered plywood overhead and the flooring. “We took apart everything and brought it back to the steel and aluminium, so we gained that overhead space back,” the captain says.

“There was a huge built-in cabinet that took the entire length of the saloon. We took that cabinet out to re-veneer the wall to match the rest of the boat and gained about four square metres of interior space, and we pulled out all the old air handler units, put in new ones and gained considerable interior volume.”

A good portion of the interior work went on during the 14 months at the Front Street Shipyard, including construction of the new on-deck master suite, a study and a full-size wine locker. “Their cabinetry and woodwork is amazing,” the captain says. “We made a China cabinet that acts as a partition that divides the salon and new main dining.”

A big part of the new design was to infuse Berilda with a new personality that fits the owners’ way of life. They had chartered many times before. “We did a lot of fun things and decorated her as we wanted,” says Williams, who has been picking out accessories and finishes for the boat during their travels.

“Our goal is for it to be elegantly casual,” she says. “My husband is a bit of wine nut, so we always have a lovely cellar, antique ice buckets and fun things to add to our pleasure and hopefully everyone else’s,” she says. “We have every conceivable Christofle glass, Baccarat, the whole gamut, but use it in a more casual way.”

In theory, Berilda sleeps 12, but Williams says she’s perfect for ten guests, unless there are small children. “We have a Harry Potter room,” she says, “a cute little room. My son slept in there and said, ‘mom, you have to put the books in there’ and came back with a set of Harry Potter books. So you see we have had a lot of laughs.”

The owners used the trip to the islands also an opportunity to hear feedback: “We put in new ice machines and realised we had to move things around to make her work especially well.

“We put a little portable pizza oven on her next to the barbecue. On lovely evenings, when it is not windy, we set up a table made of black Tasmanian blackwood, which has a bit of family history, on the upper deck near the barbecue. Then it folds away so we set up an outdoor movie screen... It is something to be up there and have a big laugh with the movie in front of you,” she says. There is plenty of rosé and sandy beaches in their future.

First published in the December 2017 US edition of Boat International.