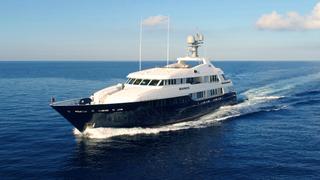 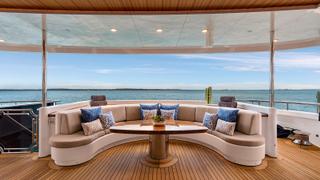 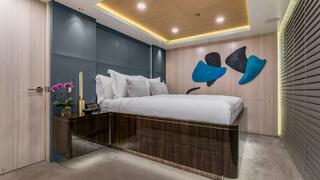 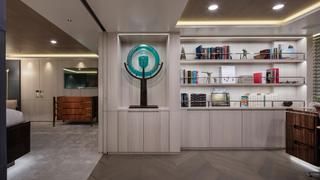 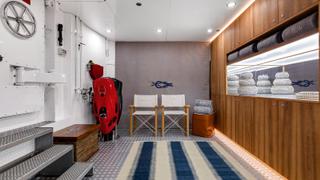 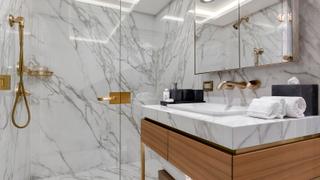 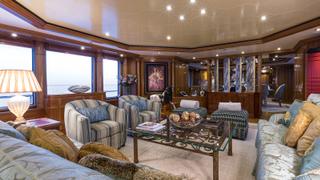 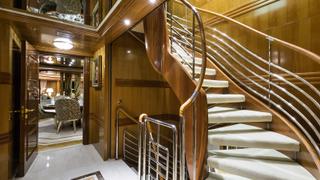 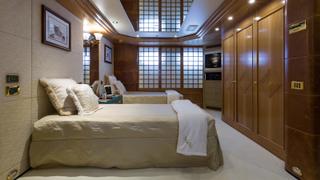 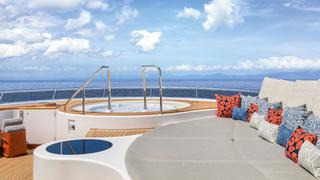 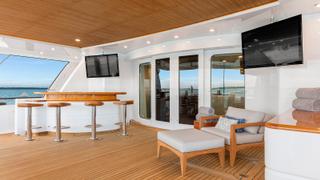 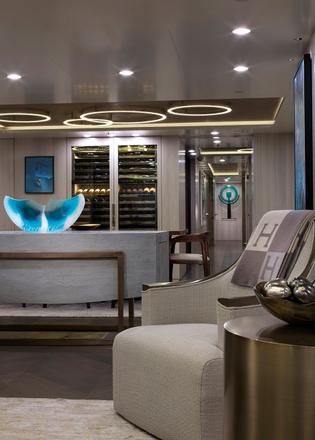 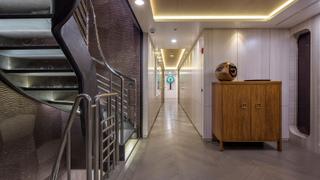 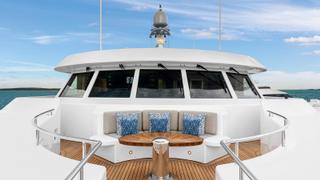 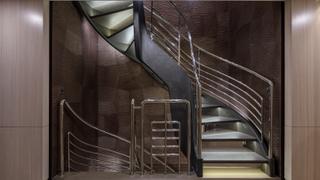 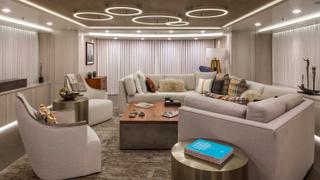 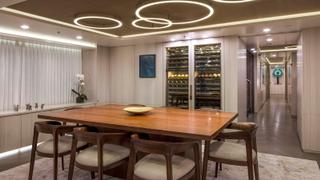 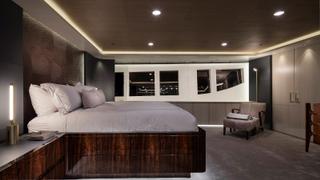 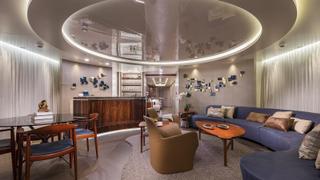 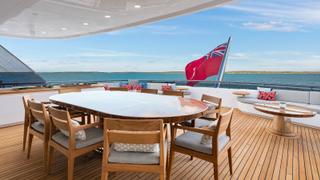 “It’s pedigreed, it’s going to be silent, it’s going to work and it’s going to attract the best crew,” says the owner who has bought and refitted a second Feadship within a couple of years. Seven months after entering Lauderdale Marine Centre, his 50 metre all-aluminium yacht is reborn as the new Broadwater.

The owner shares with designer Adam Voorhees a fondness for what’s cool, for California and the Mad Men era. He originally met the one-time winner of Boat International’s Young Designer of the Year competition through Feadship, who had asked Voorhees to come up with a concept for a new yacht. It was, says the owner, “classic but provocative and lovely”.

Such words could equally describe what they achieved with the Broadwater refit. The owner invited the designer to join him on a sea trial in May 2016 aboard the Feadship Déjà Vu, delivered in 2000 as Blue Moon, which was for sale. The trial led to a quick closing and three weeks of intensive conceptual work for its redesign.

Broadwater was built at the Van Lent yard to Lloyd’s classification. Her commissioning owner was keen on a shallow draught to explore the Bahamas. The yacht’s ability to go virtually anywhere is one of the qualities that attracted the new owner. He also wants the yacht to do well on the charter market, like his previous yachts did.

When he bought his first larger yacht, he chose a Westport 130 over a 112 because of the model’s excellent chartering record. He then moved on to his first Feadship, a yacht built in 1990, and embarked on a first refit. He sold that yacht very well, he says, taking in trade the Palmer Johnson 120 BW, which at the time of writing is for sale but came in handy when the refit stretched into months.

“As the owner, it’s weird,” he says. “They don’t seem to take into account that some of us like to be at sea.” Although eager to use Broadwater, he was committed to doing the project properly. “The thing about this interior is that it was an all or nothing prospect… It was impossible to start and stop once you got started and I knew that from the beginning.”

In addition to the chartering requirement, he wanted to accommodate several generations of his family comfortably and entertain business associates. He had no use for the sauna, wanted flexible outdoor dining and a yacht able to function optimally with 10 or 11 crew. So he decided to replace whatever systems were likely to require refurbishing within a couple of years.

When installing a superyacht elevator proved impractical, he asked for a VIP cabin on the main deck instead, now one of six comfortable cabins with flexible sleeping arrangements, including Pullmans for children.

The amount of work achieved in seven months is staggering. Shortly after entering the yard at LMC, Broadwater disappeared under a tent, re-emerging with a new Awlgrip blue hull and a boot stripe that gave her a whole new appearance. “I only like blue hulls,” the owner says. That was the least of the transformation.

Broadwater’s former interior was a long way from the rectilinear and clean look this owner prefers. “He wanted a calm, casual ambience, to bring the family on board,” says Voorhees. Together they developed a “conceptual narrative” and, from the look of it, had a lot of fun coming up with a story, incorporating elements of the beach and maritime history with references to Asian cultures.

The main staircase railing’s Asian aesthetic provided a starting point, and the lustrous steel banister is one of few original features to survive Broadwater’s extensive refit. Voorhees created a mural around it that comprises 1,000 hexagonal plates in anodised aluminium, drawing his inspiration for their unique design from omikuji, the fortune-telling paper strips that believers place at temples and shrines in Japan.

To realise these pieces, Voorhees approached Neal Feay Company in Santa Barbara. Using a CNC machine that draws information directly from computer files, the company produces aluminium pieces in any colour, polish and sheen. This appealed to the owner, whose grandfather worked with the material in the aerospace industry.

For a more modern and casual look, rift sawn oak, installed in a chevron pattern and accented with rugs, was substituted for carpeting in most of the common areas on Broadwater. A low, custom designed cabinet replaced a partition between the main saloon and dining area, creating an open space that is flanked by stainless steel framed windows and panels of limed paldao, an exotic veneer that is also used for musical instruments.

“The normal wood has a heavier vein. We wanted to tone that down, so the millwork company [Premier Custom-Built of Pennsylvania, which worked with the yacht’s owner on his homes] had to fly around to find a specific tree that had the correct grain. They bought the whole log for the project,” Voorhees says.

Small inserts in stainless steel between panels add another dimension to the background. “They provide a bit of surprise, some reflection as you move to make you more aware of the space,” the designer says.

Interesting yet quiet, the backdrop allows the eyes to wander naturally to the individual pieces within the space: a reclining chair near the sliding doors leading out to the aft deck — “perfect after dinner and dessert wine”, the owner says; accent cushions and throws on sofas; a 275 bottle wine refrigerator by Subzero; art pieces and a custom dining table and chairs.

“I prefer not to make the background and architectural space so crazy because moods change, tastes change. The furniture becomes more of the focal point,” says Voorhees, who created all the new pieces on board Broadwater to fit the far more open and contemporary space.

He likes to create different experiences with the same material, for instance through lighting. “I love working with light. It’s the most effective way of controlling a single space over time,” he says. Large rings, each machined from a huge sheet of naval brass and applied to the ceiling on the main deck, are among the interesting light fixtures on board Broadwater. They are labelled “halos” on the light switches, the name chosen after leading contender “UFOs” was ruled out.

From the main saloon and dining room, the chevron pattern on the floor and a figure of Buddha in the distance seems to lead visitors naturally to the foyer, the staircase and a dayhead. A peek inside reveals brass fixtures, including a light pendant by Louis Weisdorf for Gubi.

Forward of the foyer is the new VIP suite, with en suite, and the owner’s area. On this part of the main deck, the floor plan was completely redesigned during Broadwater’s refit. The VIP suite was created from what used to be a superyacht gym and small office and part of the original, oversized master suite. “I am confused about these huge bedroom spaces. I am here for the water,” the owner says. “I can’t imagine having more space.”

While smaller than the original, the owner’s full-beam suite remains a spectacular space. Pocket doors carve out a private superyacht office that allows taking a phone call in the middle of the night. The owner’s bathroom in lightly veined white Calacatta marble has an amazing bathtub as its centrepiece, as well as sconces by Pouenat Ferronnier.

The owner, who does not particularly care for a bathtub, wanted one because it is an item charter brokers have on their checklist, along with televisions, all of which he had replaced. He calls the steel bath “the world’s largest champagne cooler”. A minimalist tap on the wall — from Waterworks’ Isla collection — turns on the water that falls in a perfect straight drop from an unseen spout in the ceiling.

While he enjoys time alone, the owner’s favourite space on board Broadwater is the convivial upper saloon. After looking for ways to modify it, both owner and designer ultimately embraced the original circular layout.

Here, they created a casual ambience, marrying a modern sectional sofa reminiscent of American furniture designer Vladimir Kagan’s style, with vintage pieces from Danish designers — a coffee table and credenza by Finn Juhl, chairs by Hans Wegner, side tables by Peter Hvidt — plus a floor lamp by Miguel Mila TMM.

They were refinished and modified to fit the space just right and accommodate fixed structures. “It’s a boat. You have to make it work,” says the owner. Completing the décor are kinetic art pieces on the walls. The result is a room that is both grown up and playful.

Following the “no white glove” philosophy of Broadwater’s interior, the space allows guests and crew to interact and the bar beckons guests to mix a cocktail if they wish. The grown-up part comes in through the stylish furniture, which the owner says reminds him of his grandfather’s boardroom. “It has a Mad Men vibe, which I love, and the world’s most comfortable chairs.”

One the biggest changes made to Broadwater occurred outside the upper saloon doors. The casing concealing part of the engine room ventilation system consumed a large portion of the deck, limiting the space available for tables and exterior seating. In fact, the boat was devoid of a fixed outdoor dining area.

“It was very tight and, on the sea trial, if you had more than four people you had to sit out exposed,” the owner says. Feadship assisted American engineers in reconfiguring the ventilation system. The casing was then rebuilt to be both smaller and lower, making room for a convertible table that is comfortable for 12 guests or for an intimate dinner.

Broadwater’s fully equipped bridge was updated but retains its original veneer and layout. The captain enjoys a superb cabin adjacent to it. The corridor leading back to the upper saloon and upstairs foyer features a lovely chaise under a skylight, a comfortable nook to read a book or take a nap. It looks on to the side deck.

Originally, this area was used as one of two tender garages. Broadwater tows an 11 metre Intrepid, which provided the opportunity to reorganise the port side one into an outdoor gym and/or massage area. The original lazarette was also spruced up as a guest area and a washer and dryer were added.

“It never makes any sense to me that people drag towels from the beach with sand on them through the boat to where the crew lives, which is supposed to be kept as clean and pure as possible,” says the owner.

From bow to stern and lower deck to sundeck, Broadwater has been transformed. With a draught of only 2.39 metres, great deck spaces, six cabins and her cool mid-century vibe, the new Broadwater stands a very good chance of distinguishing herself on the charter market.