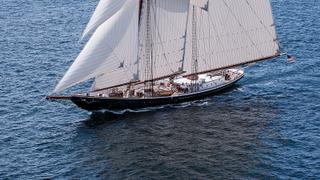 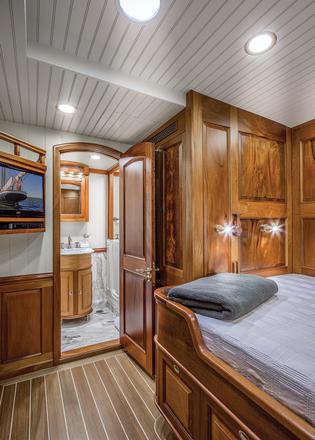 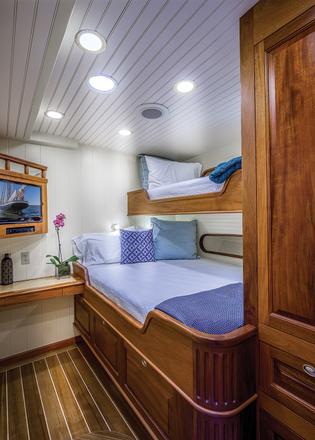 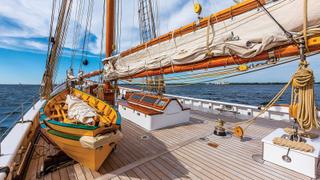 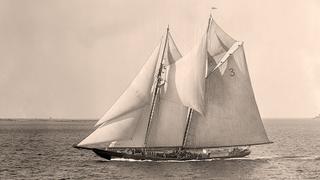 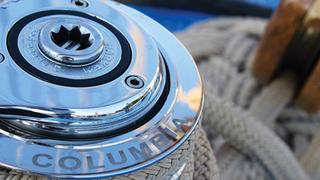 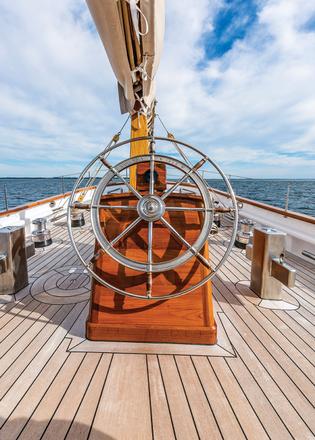 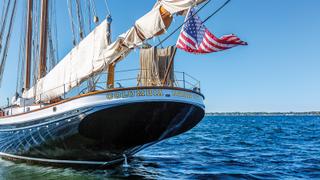 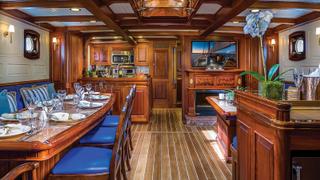 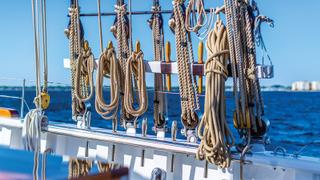 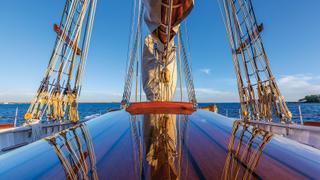 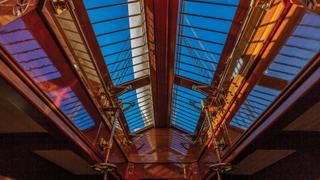 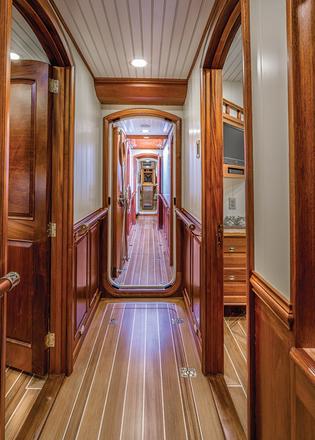 Columbia: How the classic Fisherman’s Cup schooner was reborn

To celebrate her recent appearance at the America's Cup Superyacht Regatta, we revisit the story of howColumbiawas reborn as one of the most beautiful fishing schooners afloat

It was hot and humid, a haze hovering above the water just hours after the sun had appeared, a typical late-August day in Panama City, Florida. It was ideal weather for ice-cold drinks and swimming — pleasures that the crowd that had gathered at the Eastern Shipbuilding Group’s Nelson Street shipyard had eschewed, choosing instead to stand on a sunny hillside to watch a graceful blue-hulled schooner inch her way into the water.

An oddity for a commercial yard that has produced many high-tonnage steel vessels without frills, the two-masted yacht is a replica of the 1923 Gloucester fishing schooner Columbia, a ship that inspired thousands of Americans in her quest for the elusive International Fishermen’s Cup in the early 1920s.

The popular answer to the America’s Cup, the Fishermen’s Cup dominated newspaper headlines for 19 years and fuelled competition between the United States and Canada, more specifically between fishing rivals Gloucester, Massachusetts, and Lunenburg, Nova Scotia.

A “working man’s event, a tough, no-holds-barred affair,” the race celebrated a “rugged, rigorous way of life that was on its way out,” writes Keith McLaren in his book A Race for Real Sailors. The prizes were $4,000, the silver Cup and national pride.

Some say Columbia was modelled on the Burgess-designed Puritan, a promising contender that met a premature end on the foggy shores of Sable Island in Nova Scotia. Built for $35,000, Columbia was to go after cup defender Bluenose, a 43.59 metre Canadian-built schooner with a daredevil of a captain, Angus Walters.

At the hands of her equally determined skipper, Ben Pine, Columbia came very close to reclaiming the cup for the US in 1923, but a winner was never determined. She won her trials in 1926, but never again had a chance to prove herself in the finals.

The contentious 1923 race started a brawl and the cup went undisputed for a few years. On August 26, 1927, while chasing fish off Nova Scotia, Columbia and her mostly Canadian crew of 22 disappeared into the raging waters off Sable Island. Bluenose won the last fishermen’s race in 1938.

Nearly 87 years after her demise, Columbia has risen again. “Her story is coming full circle, almost [87 years] to the day,” said Kevin Kerwin, the project’s engineer, as the new Columbia was set afloat in Panama City on August 23, 2014.

The 42.98 metre schooner, built in steel, unlike the wooden original, but with the same graceful lines, sheer, bowsprit and the heart-shaped transom of her namesake, is the long-time dream of Eastern Shipbuilding Group’s founder and president, Brian D’Isernia.

Decades ago, D’Isernia went fishing and really took to it. He cast aside a career in law to become a commercial fisherman and then began building his own fishing boats. His business bloomed into a huge commercial shipyard that now employs more than 1,500 people. Among hundreds of vessels his Panama City yard built was a 22 metre longliner that became the Andrea Gail, immortalised in the novel and movie The Perfect Storm.

The fishing boat was lost with all hands somewhere near Sable Island, just like Columbia. “There was kind of an affinity there,” says D’Isernia, who loves history and found Columbia’s original blueprints, signed by the architect, while searching cardboard boxes in the Essex Shipbuilding Museum’s archives room.

He shared those lines with Boston-based naval architects John W. Gilbert & Associates, who used Autocad to reproduce them faithfully to 1/64 of an inch.

The 930 square metre rig and sail plan is also a close copy of the original Columbia, except for the addition of hydraulic winches to ease handling. The nine sails, including a 315 square metre mainsail, are made of a synthetic material called Oceanus treated to look and behave like Egyptian cotton, and the lines are made of Dacron instead of manila.

The original Columbia was the last Gloucester schooner to be built without an engine, but her modern counterpart has a single modestly powered Caterpillar diesel engine, one of many manoeuvring conveniences added to her classic hull.

She also serves a very different purpose. Her captain, Karl Joyner, points out that the new Columbia is a blend of two worlds, a fishing and racing schooner that requires specialised crew to handle her powerful sail plan and a luxurious family yacht. It makes for interesting crew choices; it also means that the new Columbia is fundamentally different from the original.

Instead of a large cargo hold for fish, which fishermen hauled over her low-lying sides, Columbia now has a sumptuous owner's cabin and guest staterooms finished in teak, maple and mahogany.

The deckhouse, a little longer than the original, conceals the entrance to this beautifully finished interior, with brass lamps, a fireplace, leather banquettes, dining tables, an open galley and four private cabins. A crew room forward has multiple bunks for a full regatta crew or the owners’ large family.

D’Isernia, who is still a fisherman at heart, made sure there was room for two fish holds, which are equipped with two first-rate Eskimo ice machines. On the way to Columbia’s first public appearance at the 2014 Fort Lauderdale International Boat Show, Joyner says the guests caught wahoo and blue fin tuna.

There is a bit of an added twist to the story of how the new Columbia was made. Back in the day, it was Lunenburg versus Gloucester, Canada versus the US, a battle for cod and herring and a contest between the fastest schooners. The new Columbia, in her owner’s quest for authenticity, blends both heritages. The American-flagged vessel relied on experts from both sides of the border.

Eastern Shipbuilding is skilled at steel building, but a classic and luxurious schooner is a bit of a different animal. So D’Isernia hired Jacob Stevens, whose family has long been associated with boatbuilding in Boothbay, Maine, to manage the construction of Columbia. His colleagues at the shipyard credit him, especially, for the impeccable steel work and fairing.

On launch day, Columbia also had the flag of Nova Scotia flying off one of her two masts and a contingent of Canadian craftsmen in attendance. They had accompanied her Douglas fir and Sitka spruce masts, made by Covey Island Boatworks, all the way to Panama City from Lunenburg, the home of Bluenose (which eventually sank in 1946 with a cargo full of bananas) and the 1963-built replica Bluenose II. The sails, the blocks, the rigging and two authentic dories housed on the ship’s teak deck also came from Lunenburg.

D’Isernia’s team looked for suppliers both in the US and Canada before deciding on the Lunenburg companies. “What we found was that more of the skills and tradition left from building these schooners survived in Lunenburg than did in the United States,” says D’Isernia.

For example, contributing to the authentic looks of the new Columbia were third-generation block builder Arthur Dauphinee, in his late 70s, whose grandfather did the blocks for Bluenose, and his second cousin, Michele Stevens, a fourth-generation sailmaker.

“I like what I do, to take a roll of cloth and make something for a boat that is functional,” Stevens says. Columbia was a special commission for the small family-owned business. “We are a small part of [Columbia] but such a visual part of it,” she says.

She and her staff had to use the Lunenburg community centre to lay the sails after cutting and sawing them in her company’s small loft. “We had a great relationship with the [Canadian craftsmen]. And we are very proud of that,” D’Irsenia says.

Still, there seems to be just a whiff of competition left. While he would like to see a race between Columbia and Bluenose II, D’Isernia says he does not think it will happen. “They have too much to lose and nothing to gain,” he says, but adds that he would love to see them side by side.

The battle of the schooners is well-documented. Dana Story, son of Arthur Dana Story and a boatbuilder and author, contributed Hail Columbia: The Rise and Fall of a Schooner to the extensive library relaying the colourful history. But even with so much written about the schooners, the question remains: Had she been able to compete again, would Columbia have won?

“Before I started construction, ten or twenty years ago, I interviewed Dana for his recollection of his dad and to discuss which American schooner would have been faster,” says D’Isernia. “We came to the conclusion that no one will ever know.”

The modern-day Columbia is designed to reach 17 knots under sail. Sea trials done for her Lloyd’s classification gave her captain a good idea of her potential. “We reached eleven-and-a-half knots with just the four lowers in twenty knots of breeze,” he says. He’ll have more opportunity to put her to the test this summer with a trip to Washington, DC, and, in early September, a homecoming trip to Gloucester for the town’s annual tall ship festival.

Yet for all of that sailing ability, D’Isernia admits he may have had more fun building the new Columbia than sailing her, and Eastern Shipbuilding has already started construction on a second hull with identical lines. Joyner says the project team has worked closely with the companies from Lunenburg to design authentic masts and rigging that are a bit lighter than the set on Columbia.

They’ve managed to shave more than 180kg off the new rig. Michele Stevens Sailloft is again making the sails. The builder will take it slow, so a potential owner of the second schooner can choose the interior layout and finishes.

Eastern has added a new chapter to the story of a famous schooner that had a short four-year history before she sank but is remembered as one of the greats. It took three years to build the new incarnation of Columbia, and with a willing owner her sister ship could set sail before the end of the year.

Competitors and fans of the Fishermen’s Cup probably had no idea that the beauty of the ships they rooted for would keep them sailing well into the 21st century.

First published in the June 2015 edition of ShowBoats International

Malcolm Miller: The abandoned ship reborn as a sailing superyacht