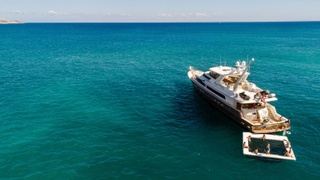 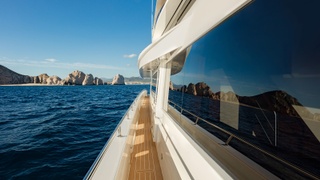 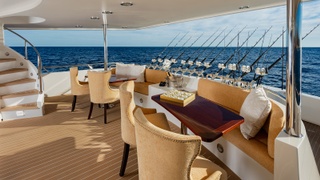 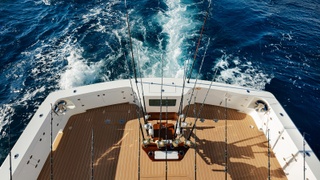 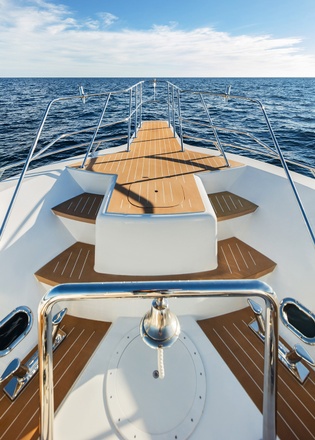 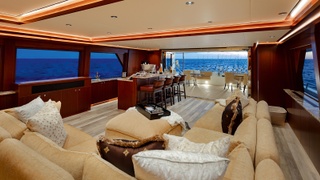 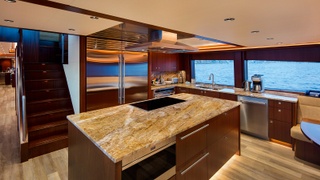 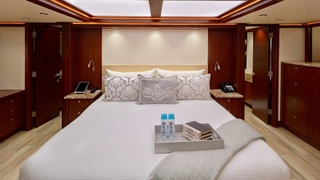 Dream catcher: Inside the refit of 38m Northern Dream

“When people shop for a new yacht, they can buy one on the market and drive away almost immediately,” says Drew Irwin, owner of Philbrook’s Boatyard, which refitted Northern Dream. “But an option we’ve found common in our region is the purchase of an older, perhaps late 1990s or early 2000s, quality-built yacht that needs refurbishing.

With a complete refit, owners can have the exact boat they want with the latest equipment and safety features. And at a price that’s much lower than a new-build.” That’s precisely what motivated Barry Stewart when he went searching for his first-ever yacht. “I found her quickly, in about three or four months,” he tells me.

“I immediately saw value in the boat, a quality vessel with a good pedigree, and she offered a chance for a complete makeover that suits our family and interests, so I didn’t worry that it was our first yacht.” He estimates a new boat of this size and amenities would cost nearly double, although he admits the refit went over budget. “It usually takes longer than you anticipate so labour costs and change orders increased the cost,” he says.

Northern Dream’s refit began in 2015 at Philbrook’s near Victoria, British Columbia. The original yacht was designed by Jack Sarin, laid-up by Westport Yachts and completed by Vancouver-based Sovereign Yachts. The vessel launched in 1999 as Donna C III and later cruised under the moniker Lady Diane II. “I don’t know much about her past,” Stewart says. “Just that she was dated, a bit long in the tooth. A solid hull but the interior was no longer stylish.” About three years later, in 2018, Northern Dream left for its maiden voyage from Victoria to Cabo San Lucas, Mexico. The painstaking reincarnation resulted in an amalgam of elegance, practicality and, perhaps above all, a first-class platform for fishing.

Stewart grew up on Great Slave Lake in Canada’s Northwest Territories. From childhood on, he caught whitefish on the lake, ice fished during the long northern winters and eventually worked a stint as a commercial fisherman. “I wanted to have ample space for big-game fishing,” he says of his new yacht. “My wife, Izabela, and my two kids love to fish. So do our friends and corporate guests.” The stern was reconfigured to increase the cockpit’s suitability for fishing. The hull was extended by almost a metre, the cockpit was stretched by another metre by incorporating the old swim platform, then the new swim platform added a further metre. The cockpit is now roomy enough to position a centrally placed fighting chair. A bait tank aft of the chair is built into the new coaming.

Stripping the yacht to its fiberglass hull was another major task. “We left the soles, structural supports and the MTU engines on their base,” says Philbrook’s project manager Jamie Hansen. “But everything else was stripped. Wiring and metals were recycled and we left the cabinetry out on the road. I imagine these cabinets now grace garages and island cottages.”

Philbrook’s design team, with much input from the Stewarts, refined the layout and co-ordinated plans with Captain Louis Valente, who oversaw the refit. “Izabela has a decorator background and had strong input into the final look,” Valente says. “The couple also bought the tableware, bedding and decorations.”

The uniform decking is striking; at first glance it resembles teak, but it’s Esthec, a recyclable composite material. “We first made CAD drawings and then templates of all the outdoor decks including the staircase treads and the top deck helm-station area,” Hansen says. “After the pieces were delivered, we caulked them into place.”

It’s the first of many easy-to-maintain features. Stewart owns a building supplies company in Edmonton, Alberta. “I know building materials,” he says. “I’m in the industry and I know when to save money and when to spend it. I didn’t want teak because it needs sanding and can’t be power-washed. Esthec costs the same as teak, but it can withstand fish blood and my active 11- and 12-year-old children.”

The refit included a cockpit extension to accommodate a fighting chair. From here and the aft deck, clusters of fishing rods are ready for deployment.

Above the cockpit, the aft deck with its semi-circular couch and tables gives access to the main salon through bi-fold glass doors. Immediately to starboard, a bar with a Sub-Zero fridge and a dishwasher, invites a visit. It is topped with Italian quartzite called “Sensation,” which integrates golden, bronze and white streaks. The same stone is used in the galley and bathrooms, and on the staterooms’ dressers and nightstands. It also tops the cabinets under the salon’s new windows. These cabinets conceal the new wiring and plumbing and provide additional storage.

The quartzite’s warm hue harmonizes well with the sapele that beautifies all of the yacht’s interior woodwork. Of the same botanical family as African mahogany, sapele lends itself to a diversity of figured wood – and many doors and cabinets exhibit quilted patterns, or straight-grain wood with a band of pommele for contrast.

The open-concept saloon/dining zone features an L-shaped couch facing a retractable 65-inch television. The couch upholstery is a champagne-colored Sunbrella, which might seem a surprising choice, but the wavy pattern feels like velvet and is durable. “We upholstered all of Northern Dream’s furniture with the same stain-resistant but warm-feeling fabric,” Stewart says. “It was the right decision. Our first night aboard, my son knocked over a glass of red wine and his sister wiped it up. Amazingly, no stain.”

The dining table, custom-made of reclaimed antique hardwood, seats eight. Above it, a triple-coffered ceiling incorporates sapele frames and LED sheet lighting by Cantalupi. Behind the buffet, a backlit onyx wall – Italian vein-cut “Honey Onyx” – ties together the other warm colors of wood, quartzite and furniture. Planks in vinyl laminate make up the flooring and are uniformly installed throughout the living areas, staterooms and bridge. The wood-like planks, made by Torlys, are waterproof, scratch-resistant and easily replaced if damaged. “It’s part of the owner’s easy maintenance program,” Hansen says. “Yet the floors, with their variegated fawn look, fit smartly with the rest of the decor.”

The well-ventilated galley is centrally located and fulfills every chef’s desires, as well as the owner’s, as Stewart likes to cook his own catch. A large island contains a five-burner Wolf induction cooktop and Sub-Zero freezer drawers. An additional side-by-side stainless Sub-Zero flanks a counter holding a Wolf oven and Asko dishwasher. A corner nook seats at least six people, a cozy place to land after grabbing a cup of java at the built-in coffee station, eat breakfast or watch the chef prepare a tasty meal.

“We wanted a sleek, modern look and feeling in Northern Dream,” Stewart explains. “Not overdone, not glittered up, not too much lipstick. I like organized and uncluttered. Everyone who’s visited the boat since our arrival in Cabo tells us how great she looks. I think that her simple tasteful look will appeal 10 years from now.”

Down one level, the 283-square-foot master suite contains a king-sized bed with a lifting mattress for stowing extra bedding. The walls, as in the other suites, are partially clad with white Majilite panels with sapele moldings and finishing. The owners share a head with twin sinks, a steam shower and heated floors.

Three en suite guest cabins, two with queen beds and a children’s bunk cabin, are adjacent to the master suite. Sockets contain USB ports for phone and tablet charging. The yacht’s quality finishes are carried over into the crew’s quarters, which include two queen-berth en suite cabins aft for the captain and engineer and four berths forward with a shared head and lounge.The refit extended to the bridge and engine room.

“The captain and engineer, along with Philbrook’s crew, recommended the mechanical and electronic equipment,” Stewart says. “They have the experience to know what a yacht like this needs to be comfortable, navigable and safe.” The new dash includes Furuno NavNet displayed on four Dell screens and a Maretron monitoring system. The ABT-TRAC fore-and-aft thrusters and stabilizers are also controlled from the bridge, which is fitted with a pair of Stidd chairs.

The overhauled 1,800hp 16V 2000 MTU diesels were repainted with Alexseal’s bright white two-part polyurethane to match the other white equipment and instruments, lending the organized engine room the pristine look of a laboratory. With its new metallic Alexseal “Hazelnut” paint, multi-color underwater lights and new hardtop replacing the canvas cover, “the yacht now has a much sleeker look, not to mention superior shelter for the second navigation station,” Hansen says.

The surrounding area on the flybridge is large enough for three Stidd chairs, a couch, refrigeration and barbecue. For total relaxation, a retractable television is in line with the six-person spa pool. There’s room aft for an 5.4 metres Robalo fiberglass runabout and two Sea-Doos, and a 4.8 metres by 4.8 metres Freestyle Slides inflatable open water pool can be deployed at the stern.

The Stewarts are delighted with their yacht. Mooring it in Cabo, where the family spends most of the year and the children attend school, they’re using their dream boat extensively for rest, recreation and, of course, fishing. Despite the long sojourns in Mexico, Northern Dreamis registered in Edmonton and flagged in Canada. “I wanted the refit done in Canada and Philbrook’s did a superb job. I’m a northern boy and a proud Canadian,” Stewart says. “The yacht is living up to her name but in more southerly waters.”