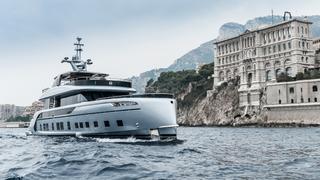 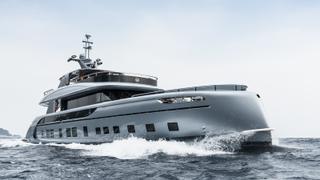 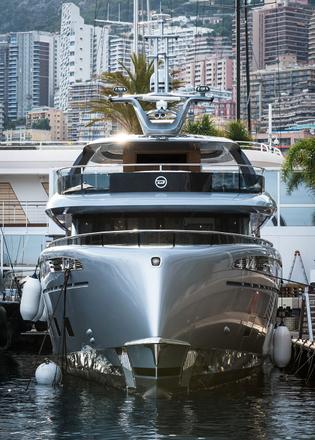 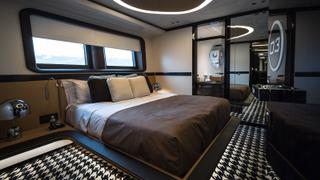 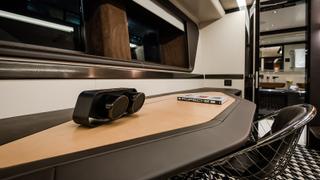 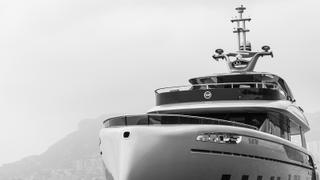 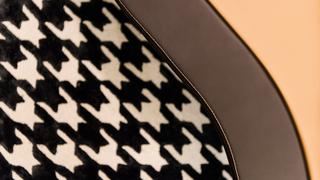 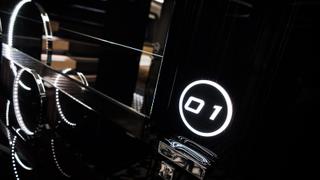 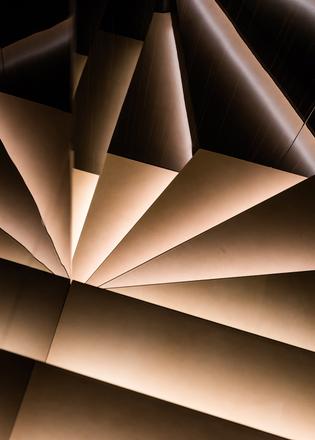 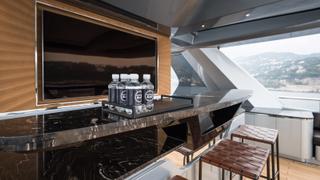 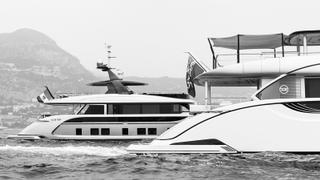 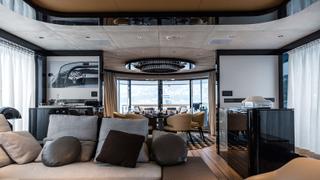 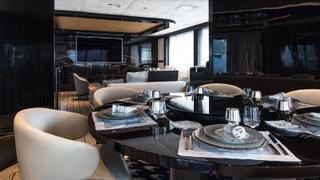 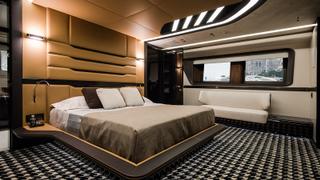 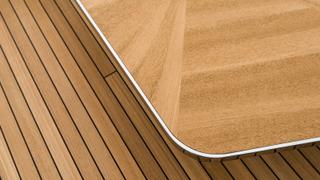 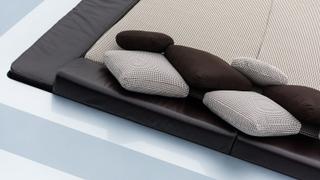 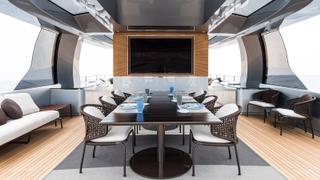 The car/yacht collaboration has gone from curiosity to ubiquity in recent years. While many luxury automotive marques have partnered with yacht builders, the results have stayed firmly in the runabout category.

Much like the cars they emulate, these craft have proven fun to drive but haven’t really been intended for liveability or long-range exploration. That was until September 2017 when the silver-hued 35 metre Dynamiq GTT 115 Hybrid, designed by Studio FA Porsche, charged ahead of the pack in size and scope.

The all-aluminium GTT 115 takes the car/yacht mash-up to a new level. Capable of transatlantic crossings and accommodating up to six, the second launch from Dynamiq is smaller than its first yacht, 38.6 metre Jetsetter, but it’s also sexier and bolder.

From the trademark rhodium silver paint colour to the Targa-style air intakes and a transom designed to echo the Mission E concept, every metre of the GTT 115 is imbued with Porsche DNA.

The design cues continue inside, from the striking Pepita houndstooth carpet which echoes fabric found in the latest 991 R edition, to the copious use of carbon fibre detailing.

Just don’t call it a “Porsche boat”. Dynamiq’s founder and CEO Sergei Dobroserdov points out that, unlike other car/yacht tie-ups of late, this wasn’t merely a co-branding exercise. Rather, Dynamiq was drawn to the design ethos of Studio FA Porsche.

“Our intent was to commission a renowned design studio to translate our ideas of efficiency, performance and sporty spirit into a superyacht,” says Dobroserdov.

Dynamiq has planned the GTT 115 Hybrid series as a limited edition, building no more than seven to ensure exclusivity. With its offices in Monaco, yachts built in Italy and naval architecture from northern Europe — in the case of the GTT 115, from Vripack in the Netherlands — Dynamiq’s ethos is to gather expertise from the best.

What attracted Dynamiq to Studio FA Porsche was its technical acumen. Porsche cars are regarded as being more than a pretty face. As smartly designed as they are good looking, they are a perfect blend of sex appeal and reliability, of form and function.

Studio FA Porsche, a subsidiary of the automotive brand founded by Professor Ferdinand Alexander Porsche in 1972, took responsibility for the entire project, inside and out. It based the exterior styling on the existing lines of the Dynamiq family, but with an automotive makeover.

Compared to Jetsetter, designed by Dobroserdov, the bow lines are softer, and there are car nods throughout, in the Porsche-like bow lights, or the hardtop, which was inspired by the Targa’s rollbar.

“But it is all very subtle. We didn’t want it to be too in your face,” says Roland Heiler, Studio FA Porsche’s managing director. When an automotive designer gets his or her hands on a yacht, there is always danger. Inspiration is one thing, but trying to create a car on the water has brought less celebrated results.

“It’s a different kind of vehicle, it has different properties, different functionalities, and we pride ourselves on designing with functionality in mind,” adds Heiler.

One such solution that merged style and substance was the design of the yacht’s aft sections, a complete departure from the wide, sloping transom on Jetsetter. Although still flanked by twin staircases, the GTT 115’s transom angles more steeply and narrows towards the bottom.

The lines are distinctly car-inspired, but the execution is also very functional, allowing the stairs to widen as they reach the sizeable bathing platform, which offers much more space than the first Dynamiq.

The sense that the GTT115 is a car lover’s yacht is unmistakable inside as well. There are distinctly masculine overtones, with black and grey contrasts, and the strong Pepita houndstooth carpet pattern that Porsche aficionados will appreciate, but which might not be for everyone.

All of the saloon furniture is made by Minotti, one of the interior options proposed by Dynamiq’s online configurator. Making her a definite “gentleman’s yacht”, there’s also a humidor and wine fridge.

The Amara ebony joinery has a beautiful petrified wood effect, its black grain marked with gold tinges. The wood is all cut from one piece, as is the Sahara noir marble and limestone that is found throughout. Lealpell leather details abound, and brown leather even covers the stairs to the cabins below.

Floor-to-ceiling windows keep the space light and bright so the masculine details don’t become too imposing, and cut-outs in the bulwarks continue this airy feel and connection to the water. A round dining table seating eight is set aft in the main saloon.

“One of the principles was also to keep the furniture loose as much as possible,” says Heiler. “Many boats have built-in things that don’t give the owner a chance to change things around or customise, and since there will be seven of these boats built, it’s likely owners will have different ideas about how to use this space.”

Automotive inspiration can be seen in the shape of the headboards and beds in the cabins, with sinuous curves capped in carbon fibre. This material is used on the furnishings to drive the car motif home. A playful touch is a number emblem outside each cabin door, like that on a racing car, which glows when the door is closed.

Studio FA Porsche worked with Dynamiq on the interior layout, along with input from Dobroserdov, who tapped into his 20 years’ experience as a broker. The GTT 115 can come in a three, four or five cabin layout; the first hull has three cabins accommodating six guests. There are also six crew for a 1:1 ratio.

“The position of the cabins was chosen very carefully,” says Marnix Hoekstra of Vripack, “placed in the most comfortable position of the boat — about 10 to 20 per cent aft of the midship, where the engines would normally be.”

The use of podded hybrid power has enabled such a layout. The GTT 115 has a split engine room, with main engines and pods set aft. A smaller engine room is all the way forward in the bow and hosts the energy management system and generators.

“Putting the priority on the comfort of the client led to the use of hybrid power and this positioning. And because engines don’t get seasick, we could put them in the bow,” Hoekstra says.

Like the first Dynamiq yacht, the GTT 115 was briefed for a blend of high speed and long-range performance. She has a top speed of 21 knots but also cruises comfortably on hybrid power at slower speeds. Vripack achieved this by using its proprietary fast displacement hull.

“We cheat nature in having a displacement hull that goes faster than it should by theoretical assumptions,” says Hoekstra. But, he says, the main brief was for comfort. Instead of a hard chine, Vripack went for a round bilge, which provides a softer ride. And instead of a hard, flat bow, there is flare to ease the vertical motion.

“We wanted to make sure that the hull design, the chassis of this boat, if you will, was worthy of carrying this Porsche design on top,” adds Hoekstra. “We wanted her to be like a Porsche when she handles curves.

"There was a strong request to have as low and dynamic a trim as possible. The aft has a very specific shape, completely CFD analysed, with rudder placement outside of the wakefield, so there are all these little ingredients that make it very unique.”

It was a race to complete the first GTT 115, around a year from the time Dynamiq signed the project with Studio FA Porsche to it appearing at the 2017 Monaco Yacht Show — where I get on board for the first time.

Moored in front of the Yacht Club de Monaco, the GTT 115 stops traffic with her unusual proportions, silvery paint scheme and automotive angles.

One standout is the superyacht sundeck, which is larger than most in its class, stretching more than half the length of the main deck. This provides space for a spa pool and lounge area forward, bisected by a bar area with an ice maker, barbecue and wine cooler.

“What we loved about this project to start with is that it was not a conventional looking yacht,” says Heiler. “And Dynamiq didn’t expect us to do something that has been done over and over again.”

Dynamiq is a builder that seems intent on pushing boundaries and challenging the norm, first and foremost with its online configurator that lets clients order a yacht much the way they would a luxury car.

Every feature of the GTT 115 can be seen and specified via this online tool, and the price is shown immediately. “Dynamiq is the only company in the industry that offers a completely transparent pricing and delivery schedule,” says Dobroserdov.

The GTT 115 starts at €12.5 million, and the first hull seen in Monaco has additional optional features that bring the price up to €13.95 million. Dynamiq can build two per year and each has a total build time of 15 months. As for hull Nos 1 and 2? “We’ve had several serious discussions during and after the Monaco Yacht Show, and we expect new contracts to be signed by the end of the year,” says Dobroserdov.

The builder and design studio hope to appeal to the Porsche aficionado, and they are putting this notion to the test as they partner with Porsche dealers on roadshows across the US, Asia and Europe — the first was held in November 2017 with Porsche Moscow.

“I wouldn’t be surprised if a lot of people who are interested in yachts also have a Porsche,” Heiler says. After all, a runabout to match your car is so last season. You might as well go for the whole superyacht.

First published in the January 2018 edition of Boat International.

Jetsetter: The Dynamiq rewriting the rules of yacht buying

Wild One: The 30m Riva superyacht with serious style