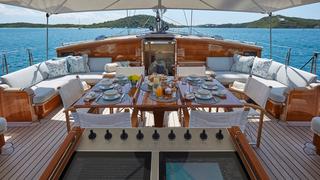 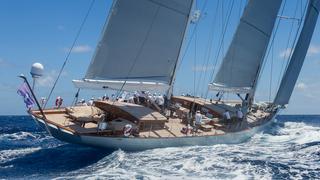 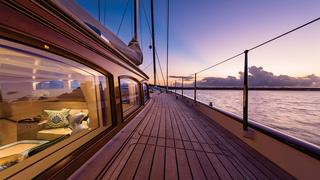 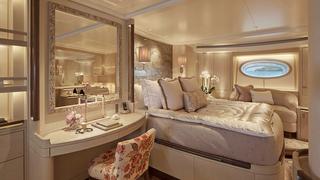 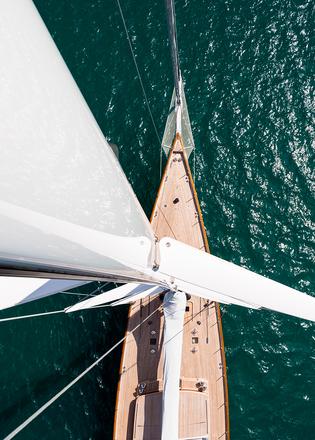 Elfje – a sailing superyacht of the ages

You would have to travel a long way to see a more magical sight on the high seas than sailing superyacht Elfje.

Given that the name of this 52m ketch, owned by Wendy Schmidt, means fairy in Dutch, this is hardly surprising. Anybody lucky enough to have seen the film of her ghosting over the waves will know there is a touch of the ethereal about her – almost other worldly.

But contained within the magic of Elfje there is a realism of a modern superyacht fit for purpose of the rigours of racing as well as the comfort and enjoyment of those on board.

The vision for Elfje largely belongs to her owner, whose love affair with sailing began after a trip to the Caribbean nearly 10 years ago. As a result of is adventure she and her husband bought a Swan 80 called Selene.

She had caught the sailing bug and when the chance to build a boat to her own specification presented itself she jumped at the chance and Elfje was conceived.

The Dutch connection came by way of an approach to renowned naval architects Hoek Design and boatbuilders Royal Huisman. The collaboration has produced a yacht of beautiful, traditional sailing aesthetics allied with the latest technology and materials.

As the founders of 11th Hour Racing, set up to work with the global sailing community to “advance solutions and practices that protect and restore the health of our oceans” it is no surprise that there is a heavy emphasis on the environmentally sustainable with Elfje. In fact, it would not be exaggerating to say that it is the essence of her.

The Hoek Design team used computational fluid dynamics (CFD) to analyse hull performance with tests being carried out at their facilities near Amsterdam. With performance paramount, trim tabs were added to the keel to help with pointing and accelerating out of tacks. Elfje also has a T-keel that lifts to deck level, reducing draught by over two metres to 4.5m (15ft). She also has a carbon rudder, rig and rigging.

Photos from on board Elfje by Corey Silken, courtesy of Royal Huisman

Elfje has been fitted with two efficient variable speed generators and a flywheel generator. The crew have the facility to adjust the power output of the generators on board depending on the load at the time. This, paired with a highly efficient lithium-ion batteries that are able to supply power for longer, has a beneficial effect on the fuel consumption. It also improves Elfje’s range, which cruising at 10 knots allows her to reach 3,690nm, using her single Scania DI 16 552KW engine.

The interior, styled by Redman Whiteley Dixon, is functional and elegant, unsurprising given that Elfje's owner spent 16 years as an interior designer.

The outstanding feature is the Plexiglas saloon table that goes through the hull and enables guests to see marine life glide by. This could almost be a metaphor for Elfje, which has taken her place as part of the global aquaculture.

Oh, and as you would expect from ‘Mr and Mrs Google’, the comms past muster, too.