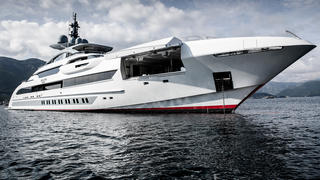 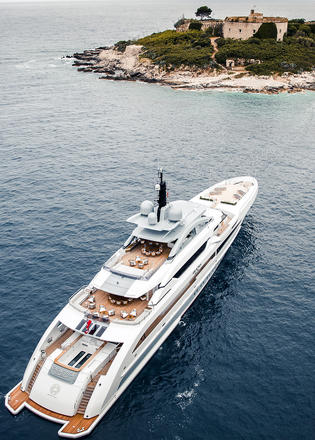 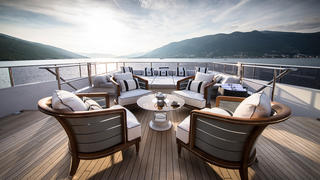 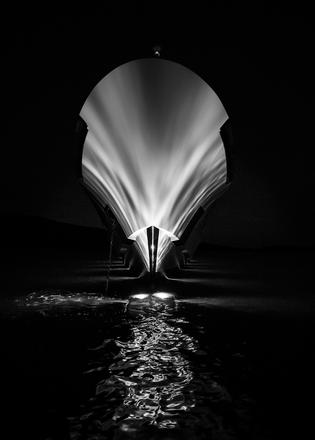 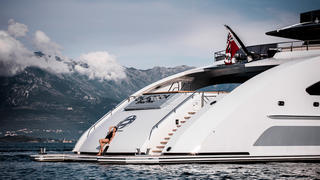 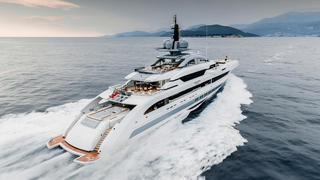 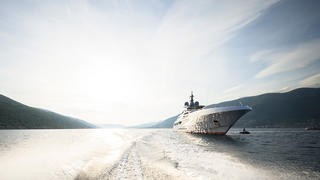 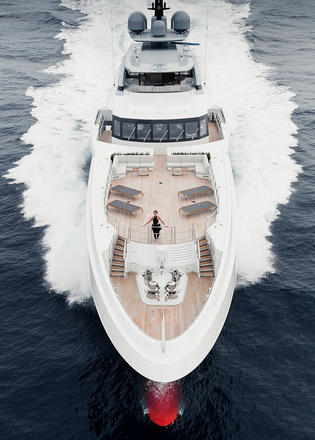 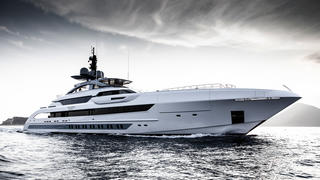 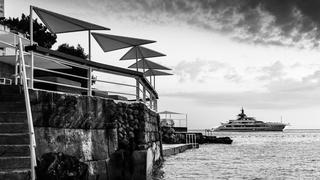 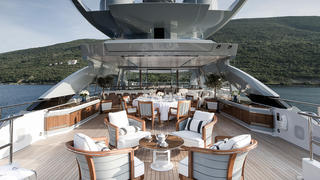 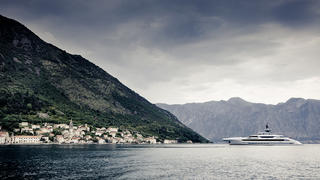 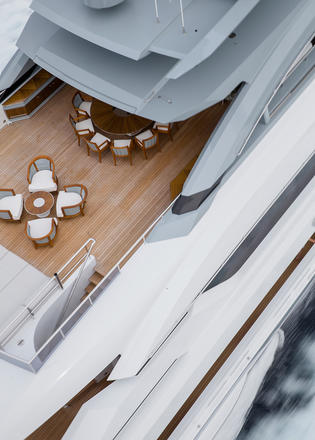 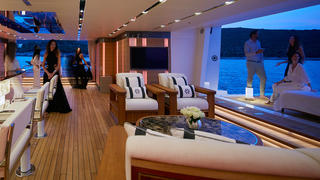 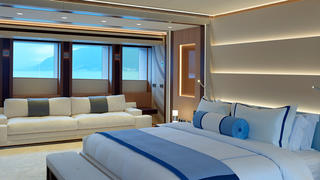 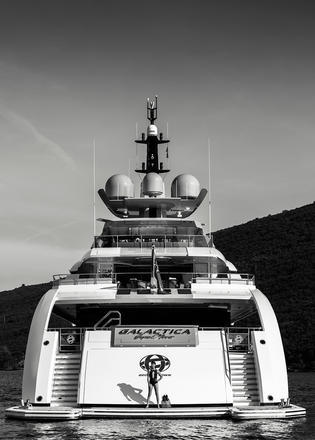 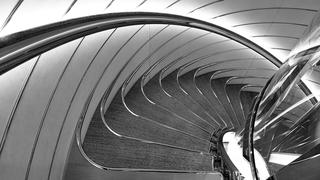 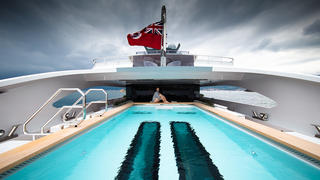 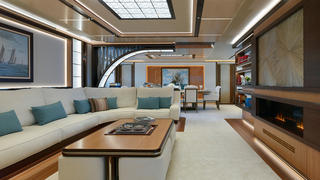 Galactica Super Nova may be five metres longer than her Heesen Yachts predecessor Galactica Star, but this evolution is about much more than extra length. For one thing the new 70 metre has an extra engine packed inside and, while Galactica Star was the first incarnation of Van Oossanen’s Fast Displacement Hull Form, the younger yacht really tests the “fast” in that description.

A centreline booster engine coupled to a Rolls-Royce water jet can be engaged when the wing engines and propellers push Galactica Super Nova above 20 knots. Then it’s time to hold on to your hat. “We did a speed run for the boss,” says the yacht’s engineer, Jan Kamstra. “On the main 20V MTUs alone we reached 26 knots.”

Once you have firmly grasped the concept of a 70 metre yacht with four decks of living space zooming by at 26 knots, consider what comes next. “If we know we are going to want to run fast, we will put the booster engine in warm-up mode,” says Captain Chris Guy. “In the wheelhouse, speed is controlled by a single throttle lever. I just keep pushing it and once the yacht is going faster than 20 knots the centreline jet is engaged automatically as I push the lever. We go from zero to top speed [30.3 knots] in 75 seconds.”

Naval architect Perry van Oossanen says: “Thirty knots is a great thing for a boat this size, especially with the simple fixed props and a single jet.” He also compliments Heesen for Galactica Super Nova’s engine room design, which is “the same size as Galactica Star and there’s one more engine in it”.

To slow down, the captain can disengage the jet manually or simply pull back on the throttle. The computer clutches out the water jet at 17 knots and shuts down the booster engine once sensors show it has cooled sufficiently. At 1,650 revolutions per minute and 17 to 18 knots, the total fuel burn is a little less than 1,000 litres per hour. Dial back to 1,250 revolutions per minute, which delivers Galactica Super Nova’s slow cruising speed of 12 knots, and fuel consumption drops to 660 litres per hour for a range of 4,000 nautical miles.

“She just wants to run,” says Guy. “I have to rein her in all the time. It often seems I hardly have any rpm on and we are doing 12 knots.” Indeed, just 500 revolutions per minute sends Galactica Super Nova moving at 7.4 knots.

From a performance perspective, however, speed isn’t the only consideration. Lots of semi-displacement yachts can achieve high speeds but it comes with a cost. The characteristic of the Van Oossanen hull is that it behaves mostly like a displacement hull — bulbous bow and all. The trick is in the way Galactica Super Nova’s hull shifts from a sharp entry to a moderate round bilge displacement form and then to a flatter, planing, low-deadrise form aft for speed.

Unlike a typical fast hull design, its stern doesn’t sink at slow speeds while the bow tries to climb over its own wave. “We have [vertical] interceptors [at the stern] to make sure the boat stays as flat as possible while running,” says Guy. These are automatic, engaging as Galactica Super Nova passes five knots. As revolutions per minute increases they extend further. Guy and Kamstra tested that, too: at full rpm, the interceptors are responsible for an extra knot of speed.

While most owners will never get into the nuts and bolts of how their yacht is “tuned” to operate, they know quickly if they are comfortable or not. “Last night we had a 1.5 metre sea against us and we were running at 15 knots. There was no slamming. None!” Guy says that emphatically, as if he isn’t sure he is going to be believed. “That doesn’t happen in a fast boat.”

While he and Kamstra point to other incremental improvements aboard Galactica Super Nova, the larger changes are in the exterior and interior design. Heesen brought in Espen Øino to restyle the profile Frank Laupman of Omega Architects created for its 2013 Galactica Star and hired Sander Sinot for the interior.

Rather than substantially enlarging the superstructure, Øino spent much of the additional five metres on lengthening Galactica Super Nova’s open decks. Not only does this make the profile look sleek and aggressive, it gives more room forward to the tender garage under the foredeck and a laid-back seating area/outdoor cinema (which turns into a helipad) on top of it.

For the fixed hardtop over the massive sundeck, he broke the angles established below with a curved support arch — but painted it and the communications mast grey so they would disappear from view rather than add height to the profile. A simple bit of trompe-l’œil that works.

Galactica Super Nova’s sweeping sundeck links visually and physically to the open bow, which is another 65 square metres of guest space — and both are designed to be usable day or night. The sundeck has sliding glass as well as the hardtop, for sun and wind protection. The foredeck has brackets for carbon-fibre poles and awnings that shade a seating area during the day.

At night, the poles support a screen for films or video of the day’s activities. This can be set in two positions: the first is for watching from that deck via a small projector; the second, for a bigger audience, involves a larger projector and image, viewed from seating on the sundeck above. A sound system is wired into both locations.

With a nod to practicality, Heesen included a deck hatch for getting the poles and lounges to a dedicated storage area below. When Galactica Super Nova is party central, a portable DJ station is linked to the onboard sound system and, for extra flourish, the carbon-fibre poles can be fitted with lights.

Galactica Super Nova has a unified aesthetic from top to bottom, inside and out: it’s beach-like, modern, open, light and pleasant. “Every space is consistent,” says Paul Costerus, of Sinot Exclusive Yacht Design. “The detailing is the same, bridge to main to beach club, but there is a shift in materials and ceiling style to define each space.”

The overhead height — 2.2 metres on the main and bridge decks and 2.1 metres in guest cabins — looks even greater because of lighting tricks and walls lit top and bottom so they appear to float. Galactica Super Nova’s wooden floors have been edged with carpet to soften the look and eliminate bulb and strip reflections. The overhead lighting is LED in stainless steel strips. “It looks like halogen and has the same light quality,” says Costerus. “The quality of the lights will make or break an interior.”

Sinot used just three species of wood — sycamore, two types of wenge, and teak — to achieve the warmth of the interior, with the joinery and furniture on Galactica Super Nova made by Metrica and Heesen. The panelling and cabinets have a smooth, contemporary style that lets the richness and grain patterns of the wood do the talking.

Brushed and polished stainless steel provides the accents. Nowhere is this more effective than in Galactica Super Nova’s central superyacht staircase, where the curved steps are banded in steel strips that appear to spin out of the central support post, hug the treads and then continue out to wrap the walls of the curved stair surround. The effect is striking, original, organic and reminiscent of a seashell.

On the subject of organic forms, all of the art aboard Galactica Super Nova has been framed in the same timber and style as the room’s joinery by owner request, to keep the same “form language”, according to Costerus.

Of course, the name Galactica Super Nova wouldn’t seem appropriate without a gigantic, multifunctional beach club with multiple hull openings. Guests arriving at the stern of the main deck are greeted by an elevated six metre infinity-effect superyacht swimming pool wrapped in a teak splash border. Raising the pool preserves room in the beach club below and two glass windows in the pool’s bottom brighten the space even when the portside shell door is closed.

The space is delightfully residential in tone with a sofa and chairs, Emperador marble accents and all the amenities for a day on the water. The full bar is fitted with a kegerator so the owner’s favourite brew is on tap. Galactica Super Nova’s large bathroom, which is lined in tile and onyx, includes a steam room.

Above, the main saloon opens to the aft deck via sliding glass doors and a drop-down window, although strategically placed orchids and other greenery provide privacy. Floor-to-ceiling windows around Galactica Super Nova’s saloon allow natural light inside during the day, while at night carefully positioned LEDs wash the leather-wrapped mullions, bathing the room in soft light. Dividing the saloon from the dining area is an unusual architectural feature — a sort of half arch — that anchors a stone, shell and gold model ship sourced by the owner.

The main deck galley and its service pantry are a masterwork of stainless steel and black granite. The layout cleverly keeps Galactica Super Nova's 16-strong crew from stomping through the chef’s domain, no mean feat on a boat with a modest 11.9 metre beam. There are three refrigerated wine caves and more refrigeration in the service pantry, to keep stores close at hand.

The master cabin forward is down a starboard hallway with a white Thassos marble floor. Bleached wenge doors with leather panels open on to the suite. Here, sycamore is crosscut to mimic lacewood, while a straight-veined Eramosa marble provides contrast. Sinot’s materials palette on Galactica Super Nova is neutral and constrained, but he’s exploited the materials to their full potential and the effect is far from dull.

It’s hard to imagine that the weight budget was calculated to the weight of each chair or that the marble is actually only five or six millimetres on a honeycomb backing. That’s part of the puzzle with a high-speed boat. Finding the path to deliver on all the elements in the owner’s brief takes creativity and co-operation, a lot of give and take, and willingness to explore new materials and methods. With Galactica Super Nova, the results are, shall we say, stellar.

First published in the October 2016 edition of Boat International

Top 6 facts about the build of Galactica Super Nova