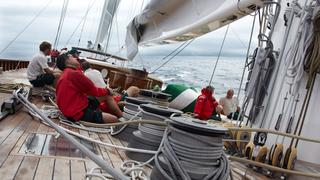 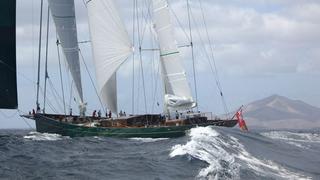 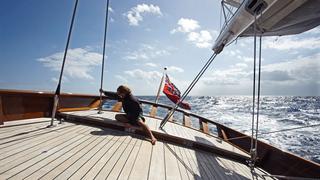 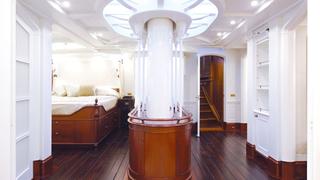 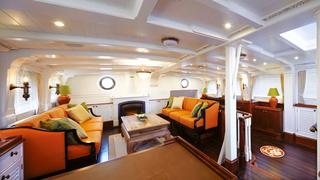 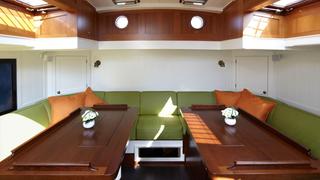 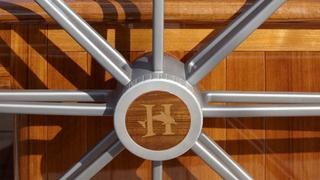 When Hetairos crossed the finish line in Virgin Gorda, British Virgin Islands, on 30 November to take line honours in the Transatlantic Superyacht Regatta & Maxi Yacht Cup 2011, it didn’t just mark the end of a 3,000 mile crossing, but rather the end of a journey that started in 2003 and which pushed every boundary of design and innovation along the way. Her passage time of eight days, 10 hours, 58 minutes and 30 seconds meant that she had averaged 15.12 knots – an impressive figure for a 66.7 metre yacht effectively undertaking her first serious voyage.

‘The top speed we recorded was 25.7 knots,’ enthuses her captain, Vincent Fauquenoy. ‘Hetairos always sails faster than the wind in all wind conditions, no matter what the angle. She feels and reacts like a much smaller yacht.’

It is a sentiment echoed by Erik Wassen, who joined Hetairos as crew for the transatlantic race. ‘She wants to reach,’ he says. ‘She is happiest at a true angle of 125-135 degrees, which is her optimum downwind angle.’

Wassen is in a good position to know – as naval architect with Dykstra Naval Architects, he is responsible for her lines, styling, sail plan, deck plan, sail handling systems and deck gear development, as well as calculating and watching the weight budget and developing a lot of the innovative approaches to improving existing technology that the design required. He has been involved with the project since genesis in November 2003.

‘The initial brief from the owner,’ he tells me, ‘was to have a yacht that could make the longer crossings and race as fast as possible, yet still be capable of transiting the Panama Canal. That limits your mast height, so we started with a maximum rig plan as a ketch with a 62.5 metre air draught, and made several sketches around it. Pretty soon we came to the pilot cutter lines as this gives you the longest waterline length and the highest speed potential.’

It would take a while for her owner to get used to the idea. The first Hetairos carries traditional overhangs with a clipper bow, although the pilot cutter does come with proven heritage – in earlier times they were known to sail well and to be capable of cutting through water and waves. The owner was keen to retain a historical link with his new build, and to keep the classic looks. But more than that, he placed a particular set of criteria at the heart of the project that would prove a considerable challenge to meet.

‘He wanted to have a winning boat,’ continues Wassen, ‘or rather, to get the maximum speed potential from this air draught, to extract everything possible and to leave no stone unturned in trying to reach it. It was all about trying to save weight in every aspect, even when it would mean an unconventional solution.’

So began the process of creating one of the most remarkable superyachts yet built. Between 2003 and 2006, several studies were made looking at every aspect of design, from beam variations to construction materials. To make it more complicated, the owner’s brief required not only the fastest yacht possible, but also one capable of cruising and entering shallow bays and anchorages.

By 2006, having worked up a number of designs in consultation with composites specialist SP Gurit, and with the hull shape fine-tuned by Reichel/Pugh, the lines were set and the green light was given. Baltic Yachts in Finland was chosen for the build of Hetairos, and Jens Cornelsen and his team were brought in to project manage it. Ocean Yacht Systems developed the twin retractable thrusters that form the heart of Hetairos' unique propulsion system, while APM in Italy created the lifting mechanism for the keel and rudder. Nothing would be standard, with Reckmann developing three unique under-deck furlers for the yacht, and even the glass for the deckhouses was specially made for the project by Tilse Industrie. In fact, according to Fauquenoy, the only standard item on Hetairos is the light in the engine room.

In every respect, and at every level, she is a remarkable feat of ingenuity, innovation and construction, but the demands on those involved were considerable.

The job of creating her interior fell to Rhoades Young Design. ‘I worked on the previous Hetairos and also on the owner’s house, so we knew each other quite well,’ recalls Dick Young. ‘He didn’t want the yacht to be just another classic boat. He is a very detail orientated man.’

The biggest challenge would prove to be creating an interior that matched the strict weight requirements dictated by the no-compromise approach to the project. ‘With a carbon build the interior is so integrated,’ Young explains, ‘that you can’t just waft in with your decorative head on – you have got to have a technical approach.’

The result, though, is spectacular. ‘We dreamt up a story to hang the interior styling on,’ Young explains. ‘The story is that she was formerly a commercial boat, bought and fitted out as a yacht – but in stages. So in the interior you can see the old wooden structure and floor. We’ve got some weird structural stuff going on like you would expect to see on an old cargo boat where no one cared about the finish. The idea then is that she’s been through a refit while going through the Orient, so you have three distinct layers – the old commercial coaster, the yacht fitted out in Colonial styling drawn from Raffles Hotel and French Caribbean detailing, and finally the decorative oriental touches.’

The interior of Hetairos' layout begins with the forward deckhouse, which presents seating and dining with a view for guests. A few steps down is the upper saloon, which links directly to the lower level forward, comprising an amidships dining room to starboard opposite a cosy lower saloon complete with piano.

Forward of this are two of the four guest cabins on board, with the other two accessed down and aft from the upper saloon. Furthest aft is the owner’s suite, complete with a separate entrance and deckhouse at the rear, which also forms a private office area. The master suite itself comprises a sleeping area, comfortable seating area, a dressing area and a large en suite bathroom, while the deck head around the base of the mizzen mast, which passes through the central part of the suite, features a ring of skylights giving a spectacular view straight up the spar.

A large, well-equipped galley lies to port by the root of the main mast, and the captain gets his own cabin opposite. The rest of the crew cabins, four in total, lie further forward, the aftermost two of which nestle under the mezzanine level crew mess, which offers direct access to the forward sailing station around the base of the main mast – perfect for operating Hetairos without disturbing guests in the main cockpit. The forepeak offers storage and a laundry.

The finish of the interior is itself remarkable. The furniture detailing and use of wood varies from one space to another, as if the interior has grown with the supposed history of the boat, from stained cherry in some areas to teak and limed ash in others. Furthermore, all the elements were specifically designed and aged to mimic what they might have looked like if Hetairos really had been built 100 years ago. The stained walnut floor planks are not cut quite straight, and include faux repairs and butterfly joints. Grit was mixed in with epoxy between the planks to suggest a century of accumulated dirt.

Furniture was designed to look pre-dinged and the cherrywood, for example, is not only stained but also carries an added patina. ‘It was a challenge for interior company Oldenburger,’ says Young, ‘to throw stuff at it, hit it with chains, and rub dirt into it before varnishing – if it was all beautifully sprayed and painted, the interior wouldn’t have felt soft.’

Likewise, the white paint on the deckhead was deliberately applied over a slightly darker undercoat ‘with a rubbish brush’ to create distinct rough brushstrokes and create the impression of a surface that had been painted over many times. The effect is extraordinary – this is not what some might term ‘shabby chic’, but rather an emotive and genuinely believable recreation of a century-old coaster-cum-luxury yacht.

Featured in the March 2012 issue of Boat International magazine