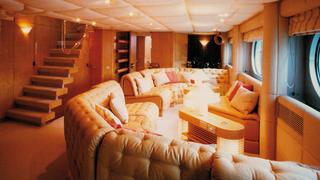 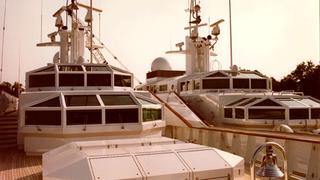 To say that this pair of yachts, designed by my father for Emilio Azcárraga, caused a sensation at the time is probably an understatement. With hulls like a sheet of folded card, wrapped up to contain the main deck accommodation, Paraiso and Azteca looked as if they had sailed in from another galaxy. Just glance at the autumn 1986 issue of Feadship’s Pilot magazine, which features the group’s other launches of the same period – Enterprise IV, for example. All have elegant but utterly conventional lines. The two yachts caused raised blood pressure at De Vries and Van Lent but it was channelled into keen competition within the Feadship family, and I remember endless debates as to who had built the better boat – there was never a definitive answer, I recall.

The interiors were no less radical: cocoons of butter-soft, over-stuffed kid leather panels offset with hammered metal detailing and kilometres of thick polished Perspex handrails and details. Bird’s eye maple featured in abundance &ndash: natural on Azteca and stained dark tobacco on Paraiso. In an interesting cultural tweak, the Dutch upholsterers had to be persuaded by my father to leave the creases in the leather panelling and put aside their default wish to pull them tight for an immaculate, smooth finish. They just couldn’t accept that the quilted finish was what he was after and thought he was being slipshod.

Conventions were turned on their head. Television sets were housed in cantilevered leather-clad boxes rather than recessed into furniture units; bathroom mirrors were big discs of glass, clasped off-centre by a single bird’s eye maple support into which three naked light bulbs had been recessed for make-up lighting. Extra cooling in the interior spaces came from deckhead-mounted swivelling fans, each with a bird’s eye maple cowling. I think the Dutch found it a bit bewildering. There were so many handrails, door handles and custom fittings in polished, overscale Perspex that on one famous occasion a direction arrow on one of the Bannenberg drawings was accidentally turned into a large piece of Perspex by the ever-willing interior sub-contractor.

A couple of years ago, I went on board Paraiso at the Monaco Show with three of my team who all joined the company after my father died. It felt like a journey into the very DNA of his design vocabulary. The glass-roofed solarium on the top deck and the snug, forward-facing observation saloon were years ahead of their time – but probably much too scary for buyers looking for a sensible 44 metre motor yacht.

My father worked closely with George Nicholson on the projects, and a nice picture was taken of them standing together in front of a very wintry De Vries yard with Azteca rearing up through the fractured ice like a faceted iceberg. It was quite a neat metaphor for the impact the sisterships had on the yachting world at the time.