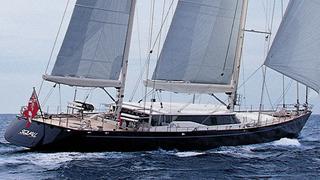 The best of designer Dubois married to the best of Perini Navi – in a nutshell, that is how Squall was described by industry watchers used to superlatives. And yet, although her hull was built at Perini’s Turkish yard in Tuzla and outfitted at Viareggio, with her minimalist, open Rémi Tessier interior and sporty Dubois profile, she bears no resemblance to any previous Perini.

Squall came about when Perini and Dubois discovered they were both discussing an entirely new style of project with the same owner – a yacht that, in car terms, would equate to a Mercedes coupé rather than the stately Bentley that symbolised the traditional Perini Navi fleet. The owner wanted, in other words, Perini Navi quality with a big dose of Dubois: the Bentley of Perini Navi and the Mercedes of Dubois Naval Architects.

Apart from working with an external naval architect for the first time, Perini was to build Squall’s hull from aluminium rather than the steel from which all previous Perinis had been built. Lower weight generally equals better boatspeed, and aluminium means that Squall displaces much less than a steel Perini – a light ship displacement of 365 tonnes against over 500 tonnes for a classic Perini 53 metre. More weight could also be concentrated into the keel. The downside is that Squall’s underwater sections are slimmer and internal volume is reduced. There is a further price to pay for performance: compared with a traditional Perini, Squall’s elegant stern reduces the volume of the lazarette. Although the skeg-hung rudder is a compromise to allow more lazarette space for a tender, the owner was happy to accept a deep fin and bulb keel of 4.9 metres.

Above deck, the yacht’s high aspect ratio ketch rig was built from carbon fibre by Marten Spars in New Zealand and soars some 57.7 metres above the waterline, while the 44.3 metre mizzen is also unusually tall. Apart from the reacher and staysail, trimmed by deck-mounted drum winches, Squall’s remaining sails are sheeted to Perini captive-reel winches, controlled by an array of joysticks at each of the twin helmstations on the aft deck. To cope with loads of up to 22 tonnes, the winches’ load sensors can be set to ease the sheets automatically. While the yacht can be controlled under power from the pilothouse, this area has no access to the sailing controls, which are operated only from on deck. The clean design of the pilothouse not only looks good but assists its function as a command, navigation and communications station.

Squall is certainly one of the most performance-oriented Perini Navis but is primarily a high-performance cruising yacht with sparkling trans-oceanic capability. Perini Navi’s traditional skills combined with an injection of new blood from the Dubois team have created an enviable yacht. But while Dubois and Perini’s designers and engineers take the lion’s share of the credit, plaudits must also go to Rémi Tessier’s Lyon-based interior design studio for creating a refreshing interior of chic minimalism that makes an immediate impact and has won much admiration.