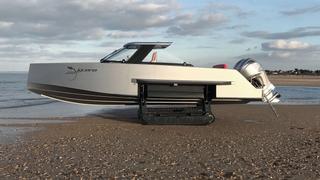 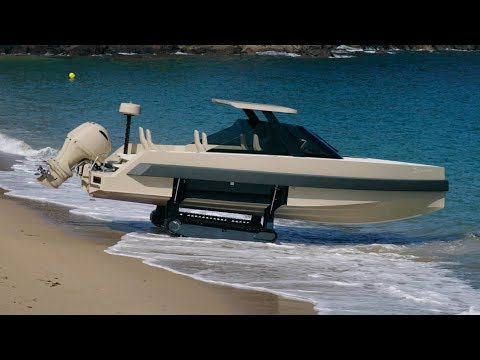 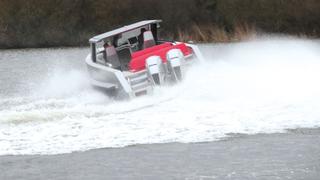 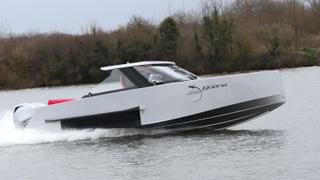 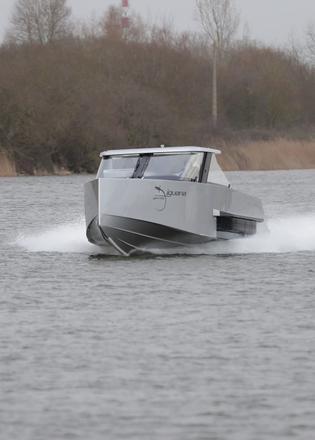 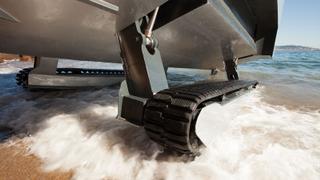 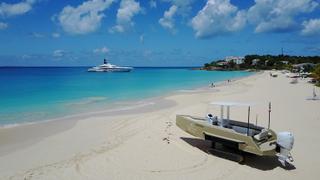 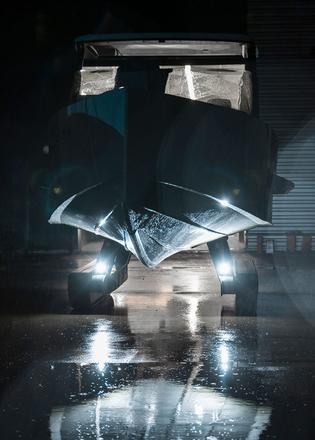 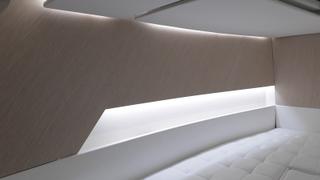 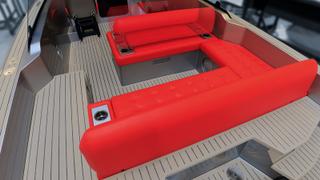 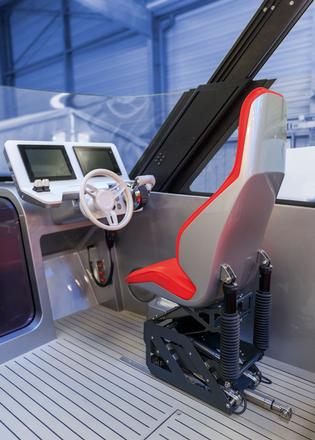 Usually when skippers talk about “parking the tender on the beach” they’re speaking figuratively about getting the guests as close to the sand as possible. If they’re lucky, they’ll be able to scramble out without getting their feet wet. But that’s all changing thanks to a boat builder in the unlikely location of Caen, on France’s grey English Channel coast.

I’m waiting, shivering, on a windswept beach frequented only by a few hardy clam fishermen, to see something rather special. And behold — from behind the bushes at the top of the strand, the graceful, highly buffed curve of a boat’s bow emerges — at about head height. It’s strange to see a boat floating on to the beach from the landward side, but it soon becomes apparent how: beneath the gleaming hull, a tracked landing gear reveals itself.

The latest, Commuter version of Iguana Yachts’ nine metre amphibian is soon down the slope and charging around on the beach at 7km/h on its caterpillar tracks. If that doesn’t sound like much, I can tell you that three metres up, at the controls of this engineering marvel, it seems like plenty. But more about that later. As sales manager Steve Huppert says, if you focus on its extraordinary land-based abilities you tackle this boat from the wrong end: “I prefer people to see her in the water first.”

Rewind to earlier the same afternoon, as I take the wheel of the Iguana Commuter. We’re moving at a sedate speed along the smooth waters of the Caen Canal — bereft of traffic on this chilly, bright afternoon. “Give it some power,” Huppert urges me as I cautiously poke at the throttle. I do as I’m told and the roar of the twin 200hp Yamahas behind me rises to a shriek. The tall reeds on either bank start to blur as we pop up onto the plane at around 30 knots. But there’s plenty of power in reserve. We top out at 41 knots, with a sensation like flying.

Even at this speed, the air blasting in through the open hardtop barely disturbs a hair on my head, enfolded as I am in the exceedingly comfortable sports seat behind an elaborately curved glass windscreen. But to be on the safe side I tap the touchscreen control panel on the dash, and the hardtop slides down on its hydraulic arms. We are cocooned in the cockpit. This is one of a few tricks hidden in this latest version of the Iguana — it also does away with padded seating behind the driver’s seat and replaces it with shock-dampened chairs; and there’s a little cabin below.

“Now turn her round,” says Huppert, once we’re back at a comfortable cruising speed of thirty-something knots. Pegasus Bridge, a crucial spot that the Allied forces secured before invading Normandy in 1944, is approaching at quite a pace.

Take a closer look at the Iguana Commuter amphibious tender

“What, just like that?” I ask, eyeing the worrying proximity of the bank. He nods. I put the wheel half over and the sensation is glorious. The boat leans into the turn with perfect poise. Other than the feeling that gravity has suddenly thickened, there is no lateral force at all. We carve a deep, semi-circular furrow in the canal, well inside the confines of the banks, and are soon accelerating back towards the sea.

It’s so satisfying that I do it again, this time turning too sharply for the speed. The stern skids out and bounces once, twice... then grips. We’re round! Even during my botched manoeuvre, the hull is surprisingly stable. On the straight, it’s easy to relinquish the wheel entirely — it tracks perfectly at 30 knots.

So I’m slightly surprised to learn that the all-carbon hull was largely developed by in-house designers and engineers. “The deep vee and chine take care of the waves,” explains Huppert. “It just cuts through them. But the flat hull aft provides stability. It’s really a very modern hull shape.”

I should point out that the exceptionally low tides on test day meant that we didn’t reach the chop of the open sea (something about keeping the boat clean), so I can only speak for how it handles as we cross and re-cross our own wake. Yes, there is some slamming, but there are no fewer than six fully-specced shock seats, with lateral as well as vertical damping.

More importantly, though, the hull remains stable, with no friskiness in the wheel. One Iguana owner who uses the boat regularly in the Channel Islands says: “I am comfortable crossing from Herm to Guernsey in Force 6 winds. As with any motorboat, the hull slams when motoring into waves at high speed but a comfortable ride is achieved by dropping the speed.”

At the end of our blast, we simply drop the landing gear, motor to the slipway, tracks turning, and, with the gentlest of bumps, we pass from displacement to land mode. There are underwater lights and a camera to help identify a safe landing spot and the gear has another unexpected benefit — stabilising the boat like a traditional keel during close-quarters manoeuvring. “You don’t even need a bow thruster,” says Huppert.

Hit the touchscreen again and Iguana’s proprietary software lowers the Commuter’s hydraulic stern ladder, so you can disembark. Not a knot has been tied, nor a fender deployed. And yet here we are ashore, with dry feet and a small crowd of disbelieving onlookers.

In a first for me, I have the chance to see how a boat handles on land. Two small side-by-side joysticks control each 22kW electric motor independently and are best manipulated using the fingers of one hand. Select between slow, beach or road mode depending on terrain, then move as fast as you dare. Like a learner car driver, it doesn’t take long to iron out the jerkiness, and the heavy tracks will happily handle steep inclines and rocks or driftwood.

Theoretically, there’s a risk of losing a track if you turn too sharply at speed — and, in fact, I succeed in doing this in the car park within seconds. But if you stick cautiously to road mode on the hard surface, and abandon ideas of using the Iguana as a 4x4, you’ll be fine.

“We want people to stay on the edge of the land and use the boat as a platform,” says Huppert. “She’s a perfect platform for changing, eating or having a shower — all on the beach.”

The small lockable cabin provides a berth for two, but headroom is tight, so this space serves better for changing and using the small head. The sliding hatch is opaque for privacy.

Iguana has taken pains to keep the Commuter’s all-up weight to an impressive four tonnes, which, spread across the two tracks, exerts a similar pressure to a human foot. From the Channel Islands to the Côte d’Azur, some 70 per cent of owners use Iguana boats with waterside homes — one has even built a special platform to get a wheelchair aboard.

The Iguana Commuter comes with a cuddy cabin and day head

Others use the landing gear to steady the boat on the seabed when they come alongside jetties prone to swell — Le Club 55 near Saint-Tropez, for instance. “It changes how you see the boat — you’re no longer constrained by marina facilities,” says Huppert. “Owners tell us they spend three times as much time on the water with this boat.”

The Iguanas are also finding roles as superyacht tenders, thanks to options such as integrated hoist points and a quickly removable hardtop, a tow bar and a large lazarette. The finish is fully customisable and with one package option you get hand-finished leather upholstery below, stitched cockpit seating, pop-up cleats, automatic navigation lights, a custom paint job for the outboards and more.

There’s no doubt these are very flexible boats. But as I shiver my way back home to Hamburg, I can’t shake a nagging thought. Iguanas are cold-blooded, land-based creatures that will take to the water if pushed. And while this boat will happily go ashore, she is most at home in the water where she makes hot blood course faster in the veins. I suppose ‘Turtle’ wouldn’t have sounded quite so good…