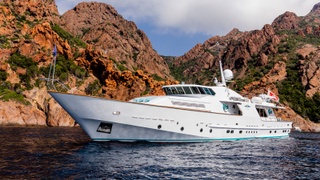 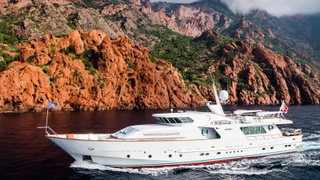 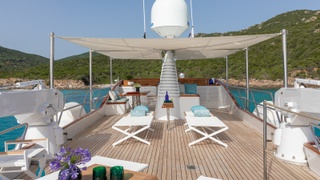 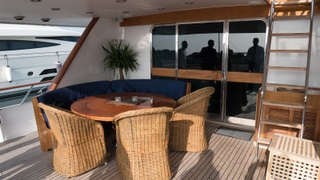 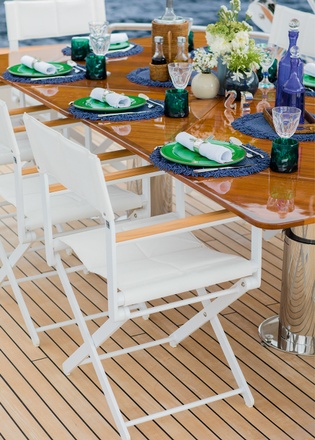 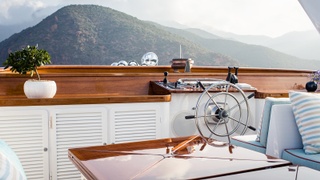 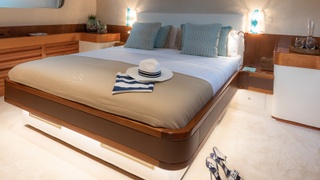 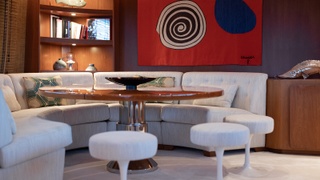 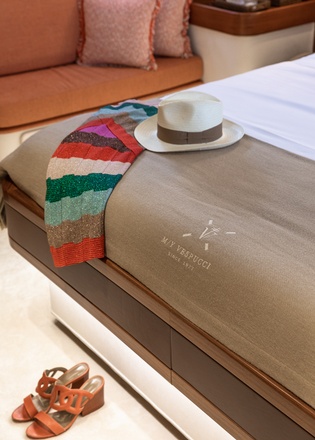 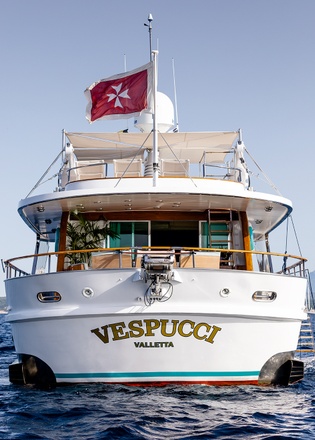 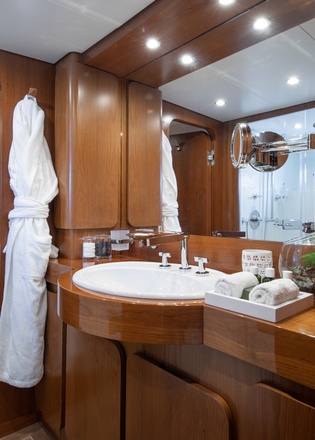 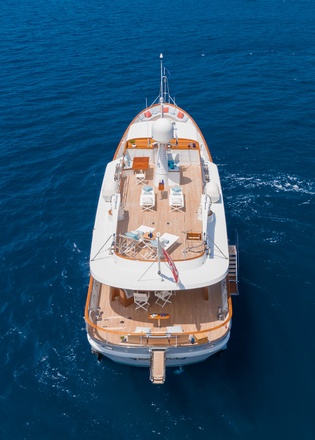 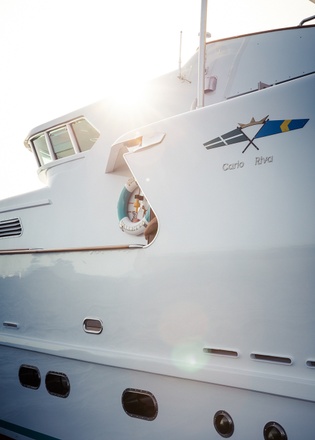 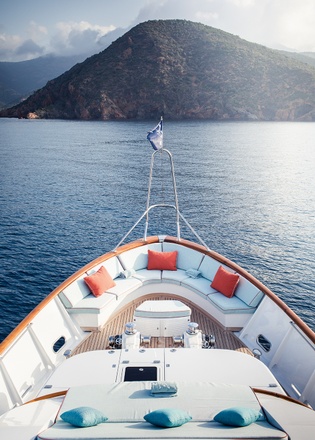 Vespucci: Inside the Refit of Carlo Riva’s 1970s Motor Yacht

The owner of 30.5-metre classic yacht Vespucci had a favourite boat when he was a child. It wasn’t one that floated, but that did not seem to matter much. In 1978, when Philippe (who has asked to be referred to by his first name only) was just shy of 10 years old, he accompanied his father to Monaco Boat Service – known for its cave-like vault of classic Rivas – and was mesmerised by an oversized model of Carlo Riva’s own boat. The steel and aluminium motor yacht had just been launched that year by CRN to a design by Carlo, a pairing that foreshadowed the Italian marques of Riva and CRN eventually coming together under the umbrella of the Ferretti Group.

“The white hull, the wood, the modern lines, the fittings, everything was perfect,” says Philippe, who went in to look at the model many more times. “I even asked my father if we could buy it, thinking it could be like a toy boat.” That young boy had no way of knowing it at the time, but one day he’d be the proud owner of the real yacht that had inspired the model he admired so much.

For many years before buying a boat, Philippe and his wife, Miene, were avid charterers who gravitated to classic yachts. Miene heard about a motor yacht that she thought would suit them, and Philippe went off to inspect it with few details known beforehand. The broker casually mentioned that Monaco Boat Service still had the original model of the yacht in its shop. Philippe had all but forgotten about his beloved model boat until that moment. “It was a total surprise,” Philippe says. “I knew Riva made bigger boats, but it wasn’t clear from the description that this was the boat.” He was filled with emotion to finally see “the mythical Carlo Riva yacht”.

A focus on outdoor living was top of the owners’ list. New areas were created so that owners, guests and charter clients can enjoy more of Vespucci.

Stepping on board Vespucci, however, Philippe was greeted by a rather unpleasant, dusty and damp smell. A run-down appearance matched the odour. “The fabric smelled, the electronics were outdated and there was a huge, ugly television in the wrong place,” he says, referring to the forward bulkhead over the dining table, where a beautiful red painting now resides.

Despite its condition – or maybe because of it – Philippe and Miene saw a world of potential in Carlo Riva’s former boat. From the outset, they were intent on restoring her as faithfully as possible to her original beauty, with the addition of comforts such as more outdoor seating and modern electronics, the latter of which required the ceilings to be cut open so that 1.6 kilometres of cable could be installed in the yacht. Carlo Riva had put the yacht to good use with his family for many years, and she had only two other owners before Philippe and Miene purchased her in 2016. Vespucci had had minor refits over the years, but never anything as thorough as what Philippe and Miene were about to embark on. Though it would be their first refit, and first time owning a boat, the couple loved a project and were ready for it.

The owners were introduced to Captain Benjamin Calzaroni by their sales broker, and in turn the captain led the owners to Monaco Marine for the refit. “We compared three different yards, and we thought Monaco Marine was the best for the price and the fact that they had all the specialists in-house, from steel to joinery. That was important, because when we found a problem, we didn’t have to ask a sub-contractor, which saved time,” says Philippe. Still, it wasn’t a quick refit by any means, taking 18 months and 20,000 work-hours.

It was one of the most challenging and expensive refits that Monaco Marine has completed, according to the yard, but they were fully in step with the owners’ precise restoration goals. “Our main objective was to give her back her initial radiance,” says Kamel Fekhart, Monaco Marine’s site director. “The owners were very involved in this project and were easy to work with. It was clear from the beginning that the most important aspect was to preserve and to respect the spirit of this beautiful boat.” The owners also contacted Monaco Boat Service to nail down the finishing touches. They didn’t have to carry out too much research, though, as Philippe was already a self-avowed Riva geek. As a kid, he had learned to waterski off the back of his grandfather’s Aquarama and has been fascinated by Rivas for as long as he can remember.

Like most classic yacht refits, Vespucci’s problem areas were revealed incidentally. When the decks were being replaced, opening up the flooring showed that the pipes and a portion of the hull were rusted. “Some pipes were almost clogged with rust,” says Fekhart. More than 260 metres of Vespucci’s old steel pipes were replaced. And then when the teak was being reinstalled on the main deck, the yard noticed a substantial disparity in the levelling of the deck, requiring more than 80 square metres of surface to be smoothed out.

Vespucci’s owners and captain were hands-on during the refit. Philippe and Miene visited the yard at least twice a month, and Captain Calzaroni oversaw all the exterior work. The crew also lent a hand, refinishing and varnishing the joinery, the majority of which is original. The owners sought to restore and retain the yacht’s numerous historic details, from the original lamps to the black toggle light switches and the joinery to the portholes, the latter of which were also caked in rust. The portholes were carefully removed, cleaned and restored while the yacht got a fresh coat of paint.

The original engines, a pair of Caterpillar D346-TA diesels, were rebuilt with Monaco Marine custom-making parts that were no longer available to purchase, including the engine exhaust. The yard replicated or ingeniously found replacements for several original parts and structures in the refit of Vespucci, including the plumbing manifold, fairleads and the front bulwark structure. “Most of the parts that had to be replaced were no longer manufactured, but thankfully our team was able to find solutions,” says Fekhart.

This commitment to a faithful restoration was a cause of dispute between the owners and the designer who had been hired for the refit. “He wanted to change too much, and we had to fight to keep and restore everything,” says Miene, who previously worked for an auction house and understands the value of vintage materials and furnishings. “It was very important for us to keep as much of the original boat as possible. Not the fabrics, of course, because those need updating. But the rest is part of the design. Carlo Riva was a great designer, so it’s important to keep what he created.”

Much to Miene and Philippe’s chagrin, the refrigerator in the galley, which had been designed by Carlo specifically for the boat, was removed without their approval. “It was a pity – it was a fantastic, huge fridge that still worked even though it was 40 years old,” she says. When the designer and owners eventually parted ways, Miene took the reins on the interior while Philippe, who works in architecture, guided the exterior design.

At the owner’s behest a new foredeck seating area was created, which also hides additional storage space. Philippe is an avid diver and underwater photographer, so the boat is stocked with scuba gear and water toys. On the flybridge, an al fresco seating area was added to port, which is the owners’ preferred spot for breakfast. A tender is located in the original spot, aft on the flybridge, but the old cradle, which was fixed, has been replaced with one that can be moved so the deck can be fully enjoyed. “We wanted to have a big deck space like you see on modern boats,” says Philippe. A table can be placed on this area when the tender is launched, creating another al fresco dining option, or the deck can be left clear for cocktail parties, as the owners were able to put to the test during the MIPIM real estate conference in Cannes. “We had more than 50 people on deck and we had more than enough space.”

Miene’s goal for the interior was to create an atmosphere that was elegant but understated and homely – “no bling allowed”. The result is an interior that feels true to the era of the late 1970s whence Vespucci came, without being kitschy. A round dining sofa and table are set in the corner against the bulkhead and paired with three retro stools. The sofa and stools in the main saloon are all covered in a light champagne fabric, which is soft to the touch. The stand-up bar across from the sofa hides a built-in television that rises from its top.

Throughout the yacht, the refreshed, gleaming teak and light materials create a warm and welcoming effect. Bright artworks and carefully chosen accent materials add a pop of colour. The tones found inside and out are a nod to Carlo Riva, recreating his trademark sky blue and lobster red shades, which Philippe and Miene had researched. The aft VIP cabin, with beige bed linens, has a chaise and another retro stool covered in a patterned material with a “Riva red” inspired colour scheme – this material is also used in the twin guest cabin on the throw cushions. The spacious full-width master suite and the second twin guest cabin, meanwhile, have sky-blue cushions. It might seem a simple detail, but it’s something that will be noticed and appreciated by true Riva fans. Even Lia Riva, Carlo’s daughter and the CEO of Monaco Boat Service, commented on the cushions when she came on board post-refit.

Vespucci might have been refitted with the dedication of a historian, but she is more than a showpiece: her owners plan to use her often. Fortunately for other Riva fanatics, Vespucci is also on the charter market and has already enjoyed a busy summer. Perhaps another young boy – or girl – will lay eyes on her and plot their own dreams of owning a Riva one day. Custodians of historical yachts, like Philippe and Miene, are invaluable in keeping classic boats sailing into the next century.

The history of big Rivas

Today’s silver-hulled Riva superyachts are not the first “big Rivas” to ply the water. Though the brand is often associated with classic mahogany runabouts, Carlo Riva had a few bigger boats up his sleeve too. In the late 1950s, he began drafting designs and then a client began raving about the quality of Dutch shipyards. In the early 1960s, Carlo collaborated with Feadship De Vries and De Voogt Naval Architects. This meeting of minds brought three yacht series to life: the 26.7-metre Atlantic; the 35.2-metre Viking; and the 22.5-metre Caravelle. The latter – a steel-built, fast yacht powered by two GM V8 diesel engines – was the biggest success, with seven models between 1961 and 1965. One of the 1965 Caravelles, Absolute (ex-Quien Sabe), recently completed a year-long refit at Feadship’s Makkum facility. In the 1970s, Carlo returned to his Italian roots, striking up a collaboration with CRN shipyard. The fruit of this was Carlo’s personal yacht, Vespucci.