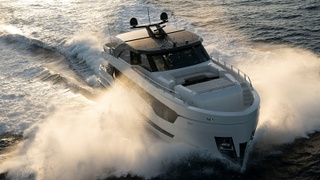 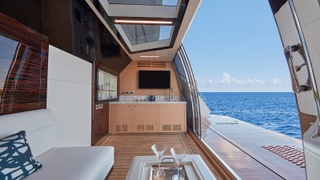 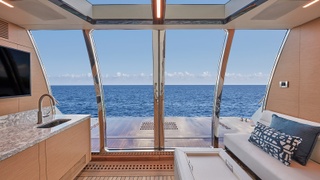 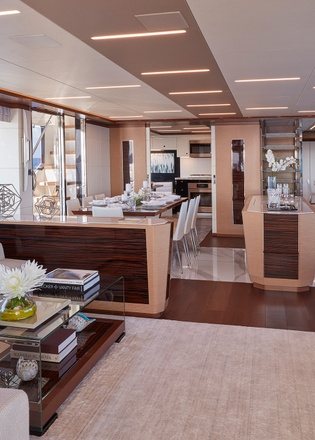 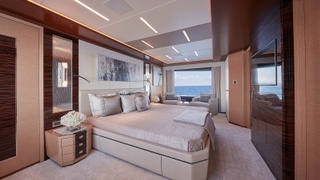 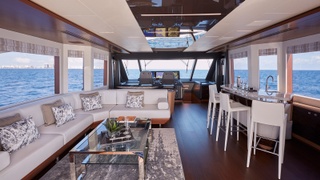 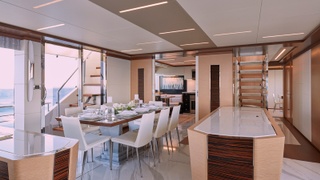 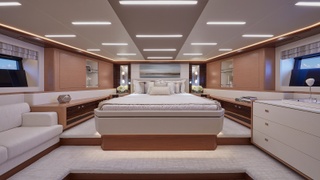 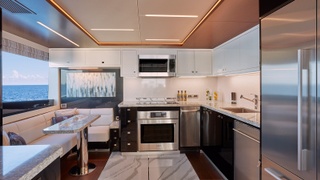 Long live the revolution: On board the Ocean Alexander 90R

The new Ocean Alexander (OA) is idling off Lauderdale Beach, gently bobbing over waves as it waits for a helicopter to catch up. A burst of wind and a shadow signal that this peaceful cruise is about to get a bit more interesting. The captain revs up the twin diesel engines and the chopper swoops like a bird of prey to catch images of the Taiwanese builder’s newest motor yacht kicking up a trail of freshly stirred sea foam.

A few days earlier, yacht designer Evan K Marshall had explained the principles that led to this design. “One of the things we wanted to offer was the penthouse-on-the-sea effect: very open, lots of glass, lots of light and an open plan, so you are really in touch with the sea,” he said.

It’s evident he’s achieved this goal. A tranquil panorama of rippled sea unfolds in every direction until the helicopter reappears a few metres in front of the windshield. Simultaneously, a voice over the radio asks the captain to make a turn at full speed. He pushes the twin MTU 16V 2000s a little harder and begins a nice wide-angle turn. For a boat with so much visible volume over the waterline and a generous beam, the OA90 proves responsive, executing the turn promptly and with very little heeling. The speed steadily climbs back to 24.4 knots and the photographer, now out of sight, asks the captain over the radio to hold it there. Top speed for this boat, fitted with a 40th anniversary special performance package (OA celebrated 40 years in business in 2018), is 27 knots.

There will be other engine options on future hulls. OA, which has already begun work on hull No 6, is planning to showcase No 5 at the Cannes Yachting Festival in September. Attracting buyers from new parts of the world is one of the stated goals for this new model. The builder has long sought to expand beyond its core group of cruising enthusiasts in North America and a growing fan base in Australia. To do so, about 10 years ago the shipyard tapped the American-born designer who lives in London. Since Marshall designed a 120 flagship back in 2012, he has tweaked the entire line, adding his brand of glamour to the boats’ interiors and gently coaxing the lines toward a more modern and cohesive style.

On this hull, the beach club is designed as a luxury space with a bar and television but can be more casual, or even house a small gym

One of the reinvented boats on the drawing boards was a new 90 he had developed with Richard Allender, OA’s director of US operations. “It was a very nice boat but it was more in keeping with what most of these boats are; it was not a real departure,” Allender says. “For a year or so, I had felt I really wanted to take this in an entirely different direction for a lot of reasons, the first one being we really need and want to sell more internationally. I told Evan I was going to tear up what we had just finished. It was going to be a challenge because I wanted it to be revolutionary, hence the ‘R’, and I wanted it still to be discernible as an Ocean Alexander with certain design elements, but we had to start with a clean sheet of paper, as they say.”

It was not so much a redesign as a complete bottom-to-top rethink that led to more than 24 months of engineering work before the first component was cut. “It certainly was a very big departure on a great many fronts,” Allender continues. “The way OA builds the boat, the materials in it, the finishes; everything about the construction was radically different.”

For the first time at its facility in Kaohsiung, Taiwan, OA designed the entire boat and components virtually, which allowed it to test everything before work began, and used computer numerical control (CNC) machines to cut frames and sections. Allender notes this is a production model that is closer to the way OA already builds its smaller boats, including its bestselling OA70e, at its production facility on Merritt Island, Florida.

The shipyard also consulted with composite specialist Gurit, which recommended a thermoplastic with shape-memory qualities, developed for the wind turbine industry, as the core material for all major fibreglass parts, including hull and superstructure. The glass, sourced from a supplier in Taiwan that works with aerospace and bullet train industries, is up to 30 millimetres thick, depending on location, and is glued to aluminium beams that also support all electrical wiring and ducts. This is not new for the shipyard, but it was used more extensively on this boat.

None of these details is apparent, except that this boat feels and looks very different. Allender had wanted it that way. One virtue he wanted the new boat to have is the ability to go a bit faster. “Younger buyers want more speed – they are not sure why, but they think they do – and all the European guys sell speed,” he says.

Marshall suggested to the yard they speak with an Italian naval architect he’s worked with for years, Arrabito Naval Architects, to design and test the new semi-planing hull. “We did a complete set of CFD [computational fluid dynamics] calculations to simulate hull performance and to improve them after a long series of iterative tests,” Giuseppe Arrabito says. “These hull lines, monohedron hull form [constant deadrise angle], are the latest research we performed for Ocean Alexander to achieve the best performance, even with very significant height about waterline as well as the axe bow designed to give Evan as much interior volume as possible in the forward area.

A significantly larger waterline beam, which also reflects the large volume of this project, ensures very good stability.”The hull proves quite comfortable. Adding to its comfort are Side-Power Vector Fins stabilisers, chosen by the shipyard and installed about midship. They work at anchor or under way, stirring just below the surface of the water like a shy sea creature, as they adjust to the current and sea state.

Looking at the yacht from the dock, it’s easy to forget this is a semi-planing hull or a 27.43-metre yacht. It’s wide, tall and bold, with a mix of chiselled lines and curves framing UV-treated windows that measure up to 2.8 by 1.4 metres. Marshall designed the 90 with a big-boat philosophy and attention to lifestyle, with several bars, a superb galley and comfortable seating in every area. A stand-out feature is the beach club, which on hull No 1 is finished with the same materials and finishes found in the main saloon.

“Often when I am designing, I am thinking about how I would use the boat with my family,” Marshall says. “I’m thinking I am here having a cocktail, maybe watching something while my children are swimming. In the evening, you have the stars out, the underwater lights. It’s just another way to add to the pleasure of being on board.” Enclosed with watertight doors, the beach club is connected to the crew area via a panel that can be easily removed. It provides another way into the crew lounge and cabins, which at least one client says he would utilise for his grandchildren.

Many owners will use the beach club space differently, Marshall says, and flexibility is built right in with free-standing furniture simply bolted to the sole, which means pieces can easily be swapped. It’s true of most pieces on board. “The idea behind this free-standing furniture is to create a more open feel and move away from that traditional boatbuilding philosophy,” he says. The concept is closer to what you’d expect to find in a modern-day flat, with low-profile furniture punctuating large spaces flanked by floor-to-ceiling windows.

Marshall has developed several potential layouts for this yacht, which can be built with the great enclosed upper saloon-cum-bridge as on hull No 1, or as an open bridge, but they all share the same approach – openness, a modern feel and easy access. Marshall’s office designed the furniture with nice details and angular shapes so it looks more dynamic, but all of it was built by the yard in Taiwan and was beautifully finished. “On the 90 the furniture style is very different and required using a lot of veneers at different angles, including the horizontal grain of the oak wood, which is really hard to do.” Marshall says. “They did an exceptional job.”

The main deck layout is an interesting departure from the norm, with an attractive galley connected to the off-centre dining area via sliding doors. Most of the time these doors will be open because the galley is finished, just like the rest of the boat, with a selection of engineered stones by Cambria for worktops and flooring, attractive veneers and upholstered banquettes. It’s a new approach to the “country kitchen” idea at a time when cooking has become a social experience that people love to share on board.

The owner’s cabin is located forward on the main deck, and is accessed via a starboard corridor. It stretches across the full beam and features a king-size bed at centreline flanked by large windows, an en suite with shared shower and dual vanities and a selection of spacious wardrobes.

The lower deck on hull No 1 – which has now been named Golden Eye – is arranged with three cabins, including a generously sized VIP cabin or second master suite. Thanks to the vertical bow design, there is plenty of space to turn this VIP into two cabins if that’s preferred, and the option already exists to do so.

The upper saloon is a great interior space that connects with the environment. The bridge is an integral part of it, so navigating can become a social activity. The space stretches behind glass doors to a vast deck (teak decking is optional) fitted with a wet bar, grill and loungers. At anchor, or docked in a marina, the forward lounge, accessed via outside stairs, is another good bet for sea air vistas. Allender confesses to having had a few nights of fitful sleep in anticipation of the launch of the 90R. But only a couple of days after the presentation of the boat in Florida, he’s already looking relaxed and confident again.

“Everyone who comes off that boat is just ‘wow.’ I am shocked at how many traditionalists like it,” he says. With an 80R and a 107R in the works, expect the revolution to continue.