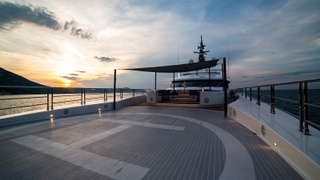 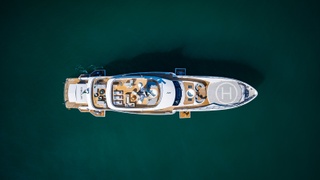 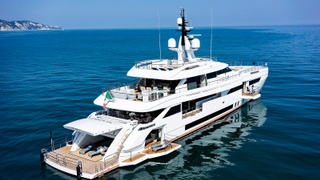 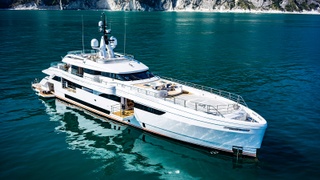 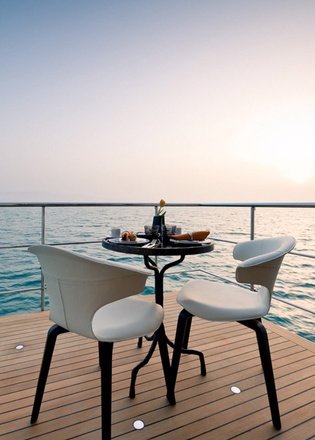 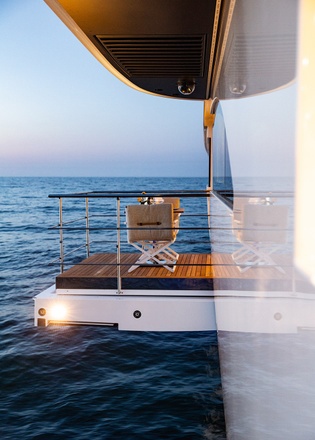 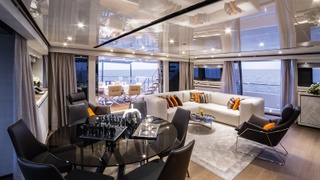 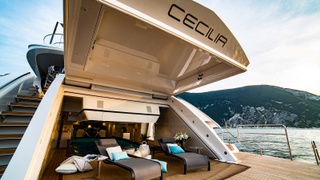 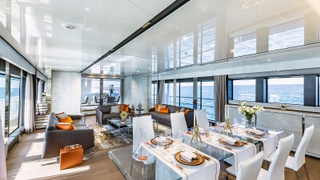 More is more: Inside the Wider 165 Cecilia

The Wider 165, Cecilia, shows that you can have sustainability, silence and eco-propulsion – and not skimp on the fun factor, says Caroline White

The stereotype of growling motor yachts snarling up the Riviera, spewing fumes and decibels and rocking little sailing boats has become a little old fashioned. Today, in a leaner, greener world where we know the delicate balance of the oceans has been upended, blind hedonism on the water looks, well, blind – and rather passé. It has left the yacht scene longing for a new kind of boat that is quiet and economical. But still fun.

At the vanguard of this (literally) quiet revolution for the past few years has been Wider, the Italian brand specialising in diesel-electric yachts that offer hushed cruising and sensible fuel consumption – but also super-sized and glamorous social spaces, and a “more is more” approach to hidden tricks and fold-out gizmos. It is sensible and excitingly eccentric at the same time.

“The propulsion systems of ships – yachts are not an exception – combined with many variables, are the cause of, at least, 20 per cent of the total sea and air pollution,” says Luciano Cardini, engineering manager of Wider Superyacht Division. “The use of new technologies, more ethical behaviour and a professional approach are the key. In so far as we can, Wider took up the challenge of being among the companies that make sustainability an approach to the market.”

First of the company’s big boats was the Wider 150 Genesi in 2015 (renamed Bartali by her Canadian owner) and last year a big sister landed: the first Wider 165, Cecilia. Both share a beamy, technical look, side decks that protrude distinctively on the upper deck and a vivid orange boot line. As their designer Fulvio De Simoni puts it: “Cecilia was born after the experience of the Wider 150, from which she takes the general philosophies and ideas and [reinterprets] them in a bigger size.”

Less obvious from the outside is that both boats were also awarded the RINA Green Plus Platinum and the RINA Comfort Class notations, for ecological credentials and low levels of noise and vibration. Both benefits are largely down to Wider’s carefully designed diesel-electric propulsion systems. Gensets drive the boat at the same time as powering lithium polymer batteries, which then power onboard services from bridge controls to air conditioning and hot water. With the generators shut off, the batteries can also drive the boat by themselves, at a modest speed but in silence.

While Cardini notes with honesty that we can call a hybrid “ecological” only up to certain speeds, on the all-aluminium Cecilia the yard worked hard to minimise energy loss in its Wider Power Management System “to keep consumption below the standard” even at higher speeds. This translates to 265 litres per hour at 13 knots, or 189 litres at her 11.7-knot cruising speed (including 40kW hotel loads). The zero-emission mode, meanwhile, can “power the yacht at five knots for hours or to stay comfortably at anchor during night-time in complete silence”, he says.

But it’s not all nuts and bolts on board, and in fact the fun starts in one of the techiest spaces. Whereas on the 150 the batteries were housed aft and the generator room in the bow, the 165 places the whole caboodle in the bow; the batteries in a temperature-controlled case on an aluminium rack. This is to make room in the tender garage for a submarine. On Cecilia, a three-person U-Boat Worx SYS3 (complete with a Jules Verne-esque manipulator hand – which clutched a bottle of Bollinger at the last Monaco Yacht Show) sits in its own specially designed nook at the forward end of the space.

“For sure, the handling of the submersible has been a complex theme to study and develop,” says De Simoni. It slides out on a sophisticated crane installed overhead. Aft, an eight-metre tender sits in a floodable float-in dock. If a client preferred, instead of the sub this space could be designed to hold a 10-metre Wider 32 tender – big enough to operate as an independent dayboat. On Cecilia, with the space flooded, both vehicles out and the aft end closed up, the tender bay becomes a saltwater pool, while broad swathes of superstructure fold down either side to open up the space and supplement the sunbathing area on the long stern platform.

Fold-outs are something of a signature on Cecilia. Balconies open up in the full-beam master cabin as well as in the gym and sauna area, both on the main deck. Each has two opening mechanisms: a window and, with that closed, a whole terrace, complete with teak decking that slides out to sit flush (so you don’t have decking running up the wall when the balcony is not in use) plus railings that pop up electrically. Even the crew get in on the action with two fully automated concealed wing stations for berthing.

In the main saloon, meanwhile, Cardini adds that “a television unfolds from the ceiling, rotates 180 degrees to be watched from both sides and lowers itself to reach the right height – if you’re seated on a table in the dining area you may want it higher or if you’re seated on the sofa in the living area you want it lower”. The set-up can also be used for business, with a concealed camera in the television frame, and two automatic pop-up columns for conference calls built into the crystal dining table.

The interiors of this boat are spacious and airy – thanks in part to doing away with the traditional engine set-up and placing the power generation equipment in the bow. To this point there are two VIP cabins and two twin cabins on the lower deck amidships, where you might expect to find the boat’s engine room. And although the diesel-electric system has won awards for its quietness, this also places any humming equipment well away from areas where guests are sleeping.

The main saloon is full of natural light thanks to sets of full-height windows that open up to allow a breeze to flow through the seating area, with its chocolate leather sofas. The wooden floor creates a feeling of flow between the interior and the aft deck, out through broad glass doors. The upper saloon, with games table and more seating, has a similarly flowing set-up with its own broad sliding doors. In both spaces there are surprises – in the main saloon, a glamorous bar is disguised as a cupboard, and in the upper saloon there is a little pantry space with a dumb waiter to the galley, again behind fold-away panelling.

The decor, by Ideaeitalia, enhances Cecilia’s fundamental qualities with a soft, light style. “The purity of the white colour together with light and fresh materials and the great natural brightness give an uncontested spatiality,” says Alessio Battistini, co-founder of the studio. The designers used a lot of bleached oak, which they scarified and then treated to “contaminate the nuances of white with sand tones, increasing their three-dimensionality”. There is polished steel in furniture and mirrored detailing for gleam, as well as buttery leather and fine marble – milky Calacatta in the owner’s bathroom, rich Bronze Armani in guest en suites. Materials with lustre and texture are used throughout, from the copper of the staircase to the oak bathtub in the master.

But it’s the exterior spaces that really pile on the features. There’s a foredeck touch-and-go helipad, which the yard recognises will more often be used for sunbathing and socialising. So there’s a removable sun awning on carbon fibre poles, as well as built-in lights and space for a DJ booth (with necessary power sockets). Aft of this is the first of two spa pools, with coffee tables and lounging space. The second is directly behind, up on the sundeck (you could probably throw a beach ball from one to the other).

This highest level is sequestered into three areas, for sunbathing, conversation and dining – with a bar that contains a concealed barbecue, fridge and freezer. And, the pièce de resistance – glass bulwarks that light up at night. It’s a straightforward articulation of this boat’s nature: fun, that’s guilt-free.