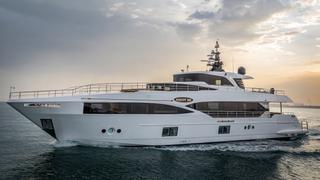 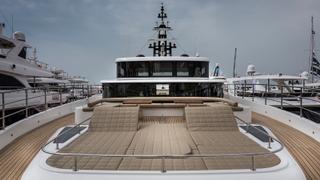 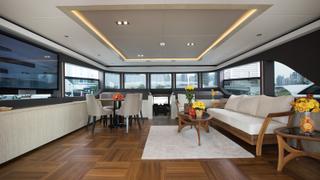 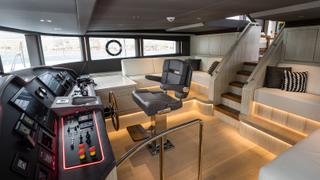 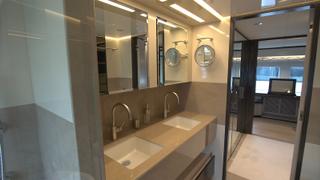 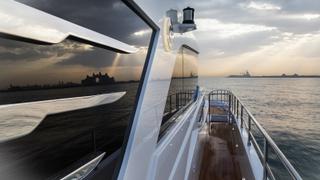 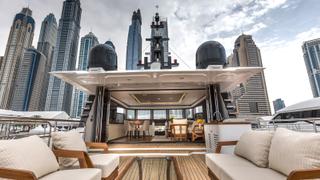 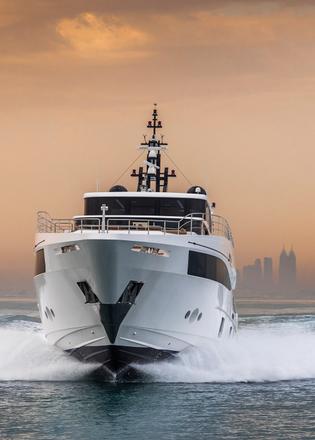 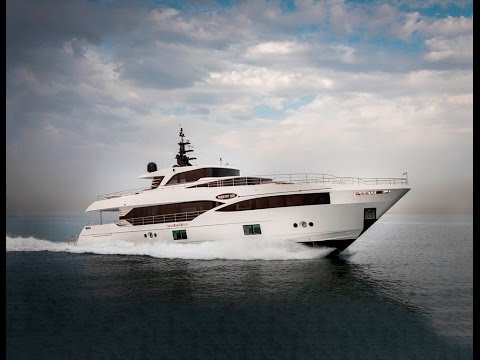 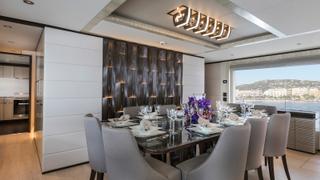 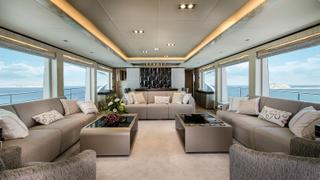 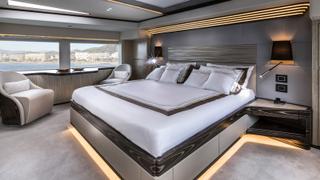 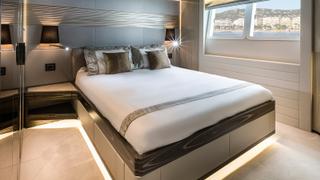 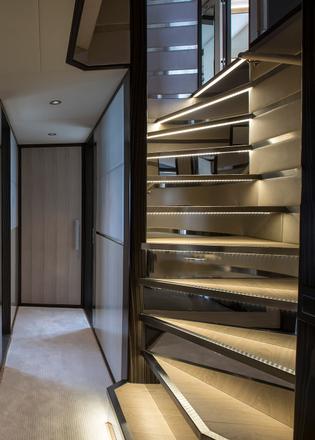 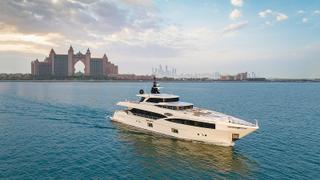 The design of Nahar, hull number one in the new 31.68 metre Gulf Craft Majesty 100 series, was very much a top-down affair. Over the past 35 years, the UAE-based yard has launched more than 9,000 boats, measuring from eight to 48 metres, but it had never tackled the skylounge concept, until now.

“The idea of a skylounge isn’t new,” admits Erwin Bamps, CEO of Gulf Craft. “But we felt that there was an opening to make something that is pragmatic and adjustable and still looks stylish.”

Bamps and his in-house design team sought to create a flexible space that could be sealed off from the elements and air-conditioned in a matter of minutes. For a yard with a strong presence in tropical destinations like Thailand and Singapore, where the weather can swing from one extreme to another in a heartbeat, this functionality was key.

The resulting design certainly moves the game on in terms of upper deck options, with a folding glass door that can disappear into the superstructure and sliding windows that can also be lowered in a matter of seconds.

However, Nahar isn’t a one-trick pony, and this inside-out philosophy has been carried through to the main-deck saloon as well. Huge panes of glass, measuring 1.8 metres from top to bottom, create the sensation of an apartment at sea. Only a thin skirting board stops this from literally being floor-to-ceiling glazing.

“This was a real engineering challenge,” Bamps reveals. “A surveyor will start frowning from the moment that you raise this suggestion, but we have huge window panels with a thickness that will satisfy class requirements.”

As with all Gulf Craft yachts, the interior for Nahar was designed in-house. The main-deck owner’s cabin benefits from two built-in skylights, the lower deck layout is split between two twins and two double cabins, and a staff of up to five people can be accommodated in the bow crew area.

Built on speculation, Nahar was sold shortly after her public debut at the 2017 Dubai International Boat Show, and delivered three months later with only minor tweaks requested by her owner.

As a dedicated globetrotter who has stayed in his fair share of imposing and opulent hotels, Bamps had strong feelings about the direction the yard should be going in with regard to the interiors:

“There are a number of hotels where you feel like you are being confronted by an artist’s design. It works for a while and it’s fun, but it loses a little bit of its long-term interest. We believe that in boating, most people don’t come to be blown away.”

For this reason, Nahar features a subtly beguiling blend of high-end fabrics, leathers and marbles — less of a show home and more of a home away from home.

This design has certainly struck a nerve, with five further hulls ordered since March, four of which were sold to repeat clients. Gulf Craft offers a wide range of customisations, but Bamps explains that most buyers in this size bracket are more interested in equipment upgrades than tinkering with the layout:

“On some models we get a lot of requests for customisation, and in some sizes we actually get very little — that’s a good sign that you did your market research properly.”

Nahar can accommodate up to ten guests in five cabins

Of those upgrades, clients have thus far asked for full LY3 and MCA compliance, as well as switching the twin 1,900hp MTU engines for Caterpillar units — fairly substantial requests, but ones that the Gulf Craft team has been able to accommodate.

All of this is underpinned by the kind of naval architecture expertise that comes from wide-ranging experience (the yard has built everything from sports fishers to fast naval interceptors).

Nahar is good for a maximum cruising range of 1,500 nautical miles at 12 knots, very much contrary to the Middle Eastern stereotype of fast, loud boats that are geared more towards showing off than enjoying a family holiday.

“There was a time when everything in the Middle East was about speed; the first question was always ‘How fast does it go?’ Nowadays, it’s completely changed and comfort is the key word,” Bamps adds. “This is more of a resort feeling. If you really want to jump waves, I suggest you use the Jet Ski.”