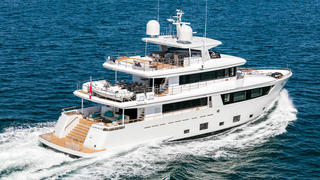 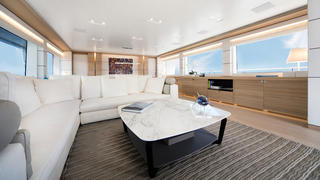 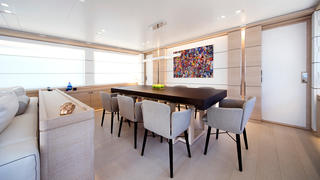 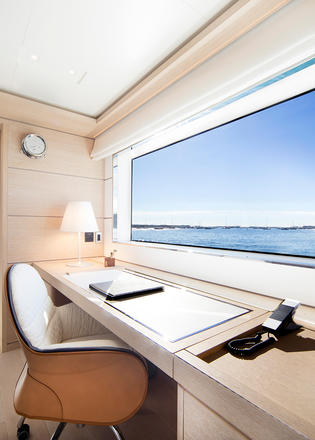 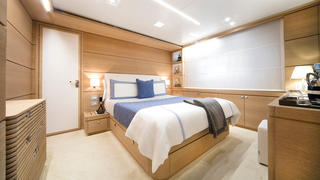 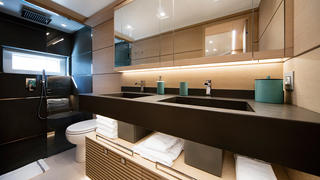 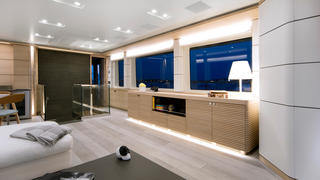 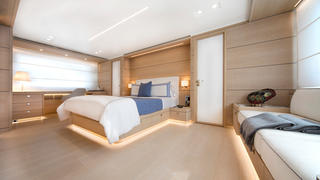 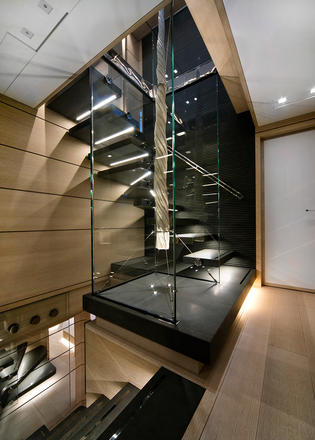 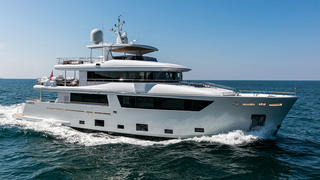 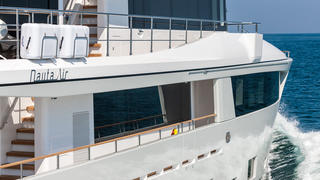 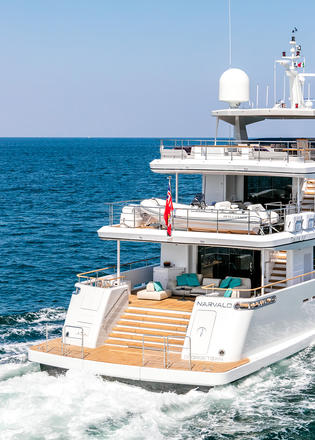 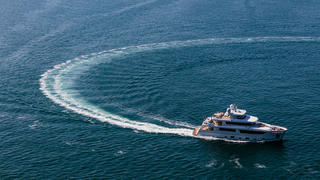 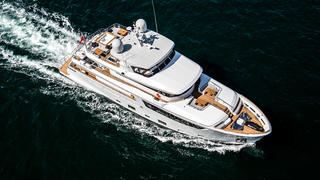 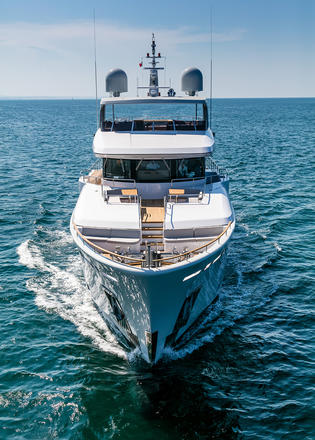 It’s not often that a staircase can aptly sum up the essence of a yacht, but you can certainly make that argument about Narvalo. This 33.4 metre explorer yacht was launched in 2016 by Cantiere delle Marche as the first Nauta Air 108. Both the interior and the exterior were styled by Nauta Design, but it is the guest staircase, situated amidships, that leaves the strongest impression.

In a fitting tribute to the yacht’s name, the stairwell winds around an oversize replica of a narwhal tusk, which is suspended inside a glass display case. As well as providing a spectacular centrepiece to the yacht, this area simultaneously reinforces the lightness of Nauta’s interior décor and the robustness of CdM’s construction methods.

It’s a feature that delighted her experienced owner, who bought into the CdM philosophy after previously owning a 26.8 metre GRP fast planing yacht.

The owner explains that the name (which means Narwhal in Italian) reflects the long-range capabilities of the Nauta Air, and he is particularly proud that Narvalo is capable of reaching the Arctic waters where this semi-mythical creature lives.

Indeed, range is another of this yacht’s outstanding features that demands attention. More and more yards are laying claim to the coveted explorer yacht label, but Cantiere Delle Marche can lay a stronger claim to it that most. Narvalo’s astounding maximum cruising range of 7,500 nautical miles at nine knots leaps off the spec sheet, and the owner intends to make the most of this.

With more than 25 Mediterranean destinations ticked off the bucket list already, Narvalo is currently exploring the Caribbean, after crossing the Atlantic under the power of her own twin 965hp MTU 8V2000 M72 engines.

However, it’s not all about clocking up the miles — the warm, welcoming interior of Narvalo encourages guests to linger and relax. Another superyacht staircase sets the tone, leading guests from the submersible swim platform to the cockpit via a broad flight of teak steps that stretches across almost the entire 7.43 metre beam.

Narvalo has a maximum speed of 13 knots

Moving into the main deck saloon and the theme of lightness is reinforced with whitened oak veneers and light grey leather inserts. Loro Piana linen adorns the bespoke sofas, while LED lighting by Altraluca illuminates the polished stainless steel handles and loose furniture by Minotti, Cassina, Bauline and Moroso.

Accommodation is split between the main-deck master and four equally-sized cabins below decks, but guests are likely to spend most of their time either in the cockpit, with its uninterrupted views aft, or on the sprawling superyacht sundeck, which Nauta describes as a “terrace on the sea”.

The star of the show is the Jacuzzi, situated aft, surrounded by flexible social spaces — the sofas and height-adjustable tables can be quickly converted from a dining area to a sunbathing spot. A hardtop bimini with inlaid LED lighting provides shelter for those seeking it.

Take a closer look at the Nauta Air 108 yacht Narvalo

Narvalo’s reign as the outright Cantiere Delle Marche flagship will be short-lived. A second hull has been sold, with two more under negotiation, while the first Nauta Air 111 yacht is due to launch before the end of the year. Not that any of this will trouble the passionate owner, who is besotted with his new yacht.

“During our summer cruising, we found every area of the boat very well thought out in every detail,” he said. “CdM and Nauta’s ingenuity on how to get the best out of the spaces was very helpful.”

Narvalo’s first long voyage, crossing the Atlantic last autumn, was undertaken by the crew alone, but the owner hopes that won’t always be the case: “It is in my bucket list to do it in the near future — I can't wait to be on board again!”