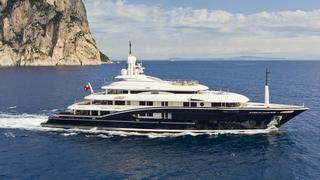 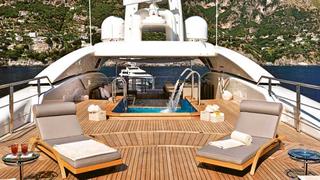 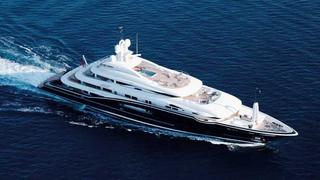 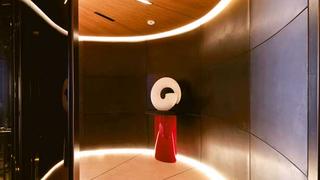 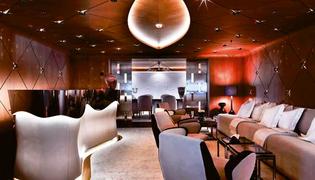 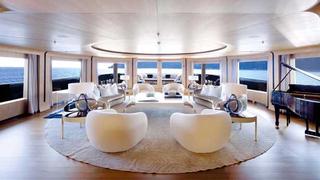 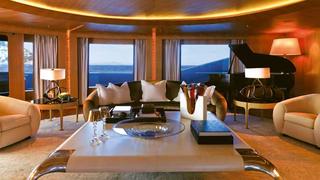 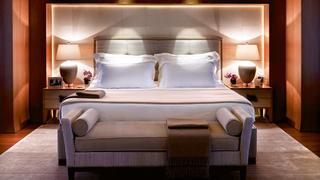 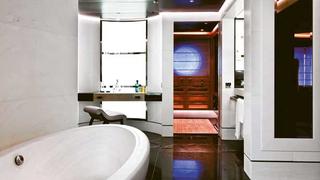 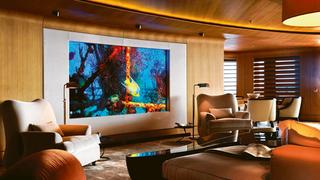 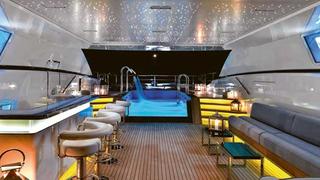 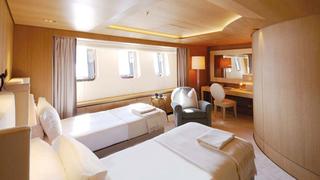 Numptia: The superyacht that crosses the boundaries of convention

The owner of Numptia, an experienced superyacht owner, wanted to create a ‘home on the sea’ that met his exacting needs and was comfortable for all generations of his family. He was prepared to cross the boundaries of convention not only with the design and implementation of the interior and exterior areas but also in rearranging the spaces – and this led to a total reassessment of how the yacht worked on different levels and the spaces needed to achieve his goals.

After visiting several shipyards and speaking to top designers the owner realised semi-custom or series yachts did not fulfil his needs. ‘Building a superyacht is the ultimate opportunity to express one’s views, desires, a dream,’ he says.

Numptia, was not only to have a unique DNA but it had to be designed and executed with expertise, quality and passion, and for this it needed a talented team and a yard that was prepared to go the extra mile. The project management role was assigned to Marco Martinelli, an engineer with experience of running a shipyard team and someone that the owner had worked with on his previous 60 metre yacht.

Martinelli introduced the owner to Mr Rossi at Rossi Navi in Viareggio, Italy. The owner found a man he had an immediate rapport with. ‘I wasn’t talking to a manager but a gentleman, who knew his shipyard and his costs and he said he would deliver on this project,’ he says. Rossinavi took on the challenge with quiet confidence knowing it had to deliver a custom yacht to the standard of excellence equivalent to any of the big shipyards around the world.

For the design of Numptia, the owner decided to go ‘off piste’ with the team, not using the big names in the industry but ‘younger’ blood who were less well-known but nonetheless experts in their fields. There were strict parameters laid down as to what the yacht should deliver in terms of an exterior style – elegant and timeless – as well as engineering that was expertly executed, but the grey area was in the final design. The owner particularly liked the lines of the Carinthia yachts and the panache shown in the designs by the late Jon Bannenberg, so the bar was set high.

The naval architect charged with designing the hull form was Horacio Bozzo of Axis Group Yacht Design. The lines are based on the performance requested by the shipyard plus a weight analysis, calculations for the tank capacity and distribution to ensure the vessel has the right trim in all conditions. The project surveyor was Sparkman & Stephens.

During sea trials in Force 4 conditions, Numptia reached a top speed of 18.6 knots at half power, which is 2.5 knots more than predicted and it is estimated that Numptia will have a range of 7,500 nautical miles at 12 knots.

What is evident is that the countless design permutations for the exterior, including 27 mast solutions, by designer Tomasso Spadolinihas really paid off. He has succeeded in creating a piece of art in a striking navy and off-white DuPont paint livery that is refined and elegant, flowing gracefully from whichever angle you look at it. From on high the decks have a terraced appearance, tumbling down fore and aft in perfect sequence with each element in keeping with the other.

The design of Numptia not only looks good, it works, and this is due to the detailing from the beautifully sculpted stainless handrails to the rise and fall of the topsides and superstructure; from the shape of the bow to the curves carried all the way to the stern.

Spadolini drew the general arrangement plan including the reassessment of the layout and how the flow through the yacht was to be achieved – quite possibly the most complicated part.

Along with the owner and Martinelli, the interior layout was conceived by design studio Salvagni Architetti. Achille Salvagni explains, ‘I am inspired by daily life: the quality of light, the colours and harmony of nature in perfect proportions. I believe that creating something unexpected and unorthodox is the key to a more comfortable and harmonious environment. We wanted to keep a sense of pure design, with spaces delicately enhanced by the use of a closely matched palette and well-placed lighting accents.’

Numptia was bestowed with a Judges Special Award for ‘interior design with the widest appeal’ at the 2012 World Superyacht Awards. Entering Numptia you can see that Salvagni has produced something that is calm, clean and intelligent in its execution. Boarding from the starboard side main entrance you enter the inner sanctum: a staircase in limestone with stainless and bronze inlay that spirals through all the five decks, enveloped around a seamless circular glass lift.

Throughout Numptia, the palette is calm and cool picked out with artefacts, sculptures, ornaments, lighting and distinct pieces of furniture. Understated luxury gives a delicious visual experience with furniture that invites you to sit in comfort, with cashmere, cottons, silks and velvets from the Loro Piana collection.

The personality of the yacht is forged using the pureness of industrial materials such as alpacca (nickel silver) for the table in the main saloon and attractive contrasts between dark and light elements, from deep ebony to subtly bleached teak, alongside the use of marble, stone, bronze, parchment, galuchat and smooth leathers, with shots of glossy black ebony and Murano glass.

Each deck of _Numptia _has its own personality, working in harmony to create a comfortable and stylish home on the sea. Instead of the normal three-compartment saloon on the main deck you enter a delightful space with a central cathedral-style ceiling in teak with rounded teak curves instead of crown mouldings, highlighted with lights that represent sea urchins. A bar snakes seductively across one wall while a set of architectural doors sculptured in alpacca seemingly guard the treasure deep within.

When the double doors are opened they reveal a spectacular dining table also forged out of alpacca with seating for 12. Wide teak planked floors are covered with silk carpets. Floor-to-ceiling windows aft give an endless view over the ocean with a cluster of beautifully designed chairs and sofas in a delightful conversational circle which flank an oversized low table: the perfect place for listening to background music from the Steinway piano. Customisation on Numptia is to the nth degree with chairs and tables reminiscent of the regalness you would have found on ocean liners in the 1930s and 1940s, with a clever twist on the designs by Salvagni.

Although the owner’s apartment is forward on the main deck as one might expect, the layout is somewhat unconventional in that the owners divided up the full-beam suite: a beautifully appointed office which could also work as a private sitting room; and the bedroom that is divided into a reading area, a central sleeping area and a television area.

Bathing does not disappoint on Numptia – a delightful, light marble spa area with a solid white marble bath as a central feature, with a huge shower area behind and floor-to-ceiling windows to each side. Private dressing rooms with intricate detailing are to either side.

The bridge is one deck up with good visibility through large windows and there is access both sides to wide deck areas and curved alcoves in the hull structure, which house the bridge wing docking systems. What is unusual is the large dedicated radio and chart room off the main walkaround bridge console, which I think we will see appearing on other yachts.

Moving aft past the captain’s quarters is a haven for the young and young at heart. A cosy sitting room complete with a fireplace invites you to relax, but the ultimate aim of this room is to allow the youngsters to enjoy the central 103 inch Panasonic television screen, much like a private cinema, with a huge day bed on which numerous people can lounge in comfort. This is a clever use of the space where the engine extractors run up the port and starboard sides of the room cutting into the space, but because of the way the room is designed it does not give that pinched look that is so familiar on other yachts.

Up another deck where you would normally find the bridge is dedicated to complete luxury spa living. The idea was to create the experience of a top spa resort with a few extras. The décor changes tempo here but still keeps the teak theme. Choose from a session in the well-equipped gym, a massage in the calmness of the well-being room or be pampered in the beauty room and hair salon. Thought has even gone as far as including a sauna and separate Turkish bath, or if this is all too much simply sink into one of the custom-designed double sun beds on the aft deck.

Forward on this deck is a cracked-glass bar where you can sit on high stools and watch food being prepared. Two raised seating carousels forward add an extra element and make this a popular spot.

The total rethink of the way the spaces are used on Numptia enabled the top deck to become a dedicated pool deck where a central oblong infinity pool shaded in part by the overhead mast can be turned into a bubbling cauldron at the touch of a button. An adjoining bar area and oversized sofa can be shaded by a Bimini if needed. This deck can also be turned into a party deck. An elevated teak-covered touch-and-go circular helideck (complete with landing lights) can be turned into a dance floor with all the electrics and lighting already installed, ready for lots of fun.

The accommodation for guests is found on the lower deck in four identically decorated double and twin cabins each with en suite shower facilities and touches of delightful eccentricities in each one. A slightly larger VIP is up on the bridge deck.

The crew accommodation is forward of the guest area complete with mess, crew galley and cabins forward. On the tank deck forward there is a large dedicated laundry.

The garage aft of the split-level engine room has gullwing doors engineered with integrated launching cranes for the two tenders, a Columbo and Castoldi, and plenty of room for all the accoutrements for watersports. The aft deck can be turned into a beach deck for swimming in the sea with a head and shower facilities at this level.

It is refreshing to find an owner who is prepared not only to go the extra mile on the design but also to put his faith in a shipyard that although established in some areas is very young when it comes to full customisation. If this is the sort of standard it can achieve at a budget that the owner set, only broken when he went for broke on the Audio Visual equipment, it is a credit to the yard and all those involved in building and designing Numptia.