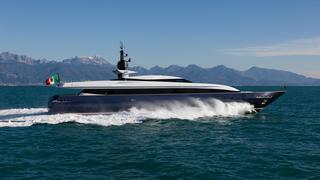 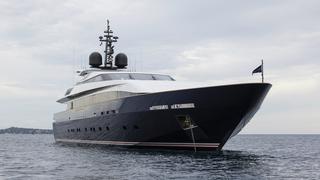 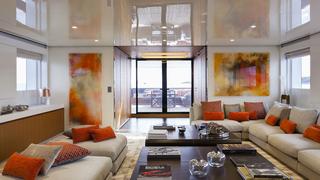 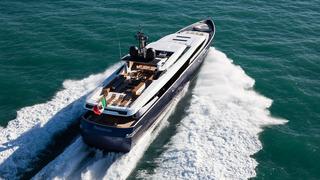 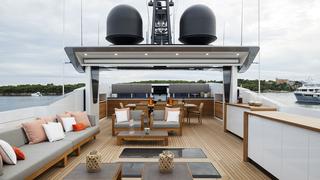 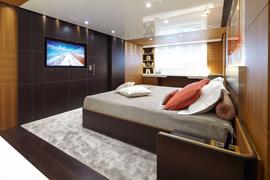 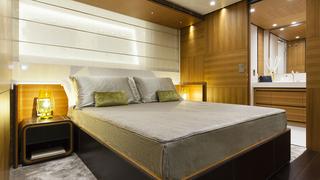 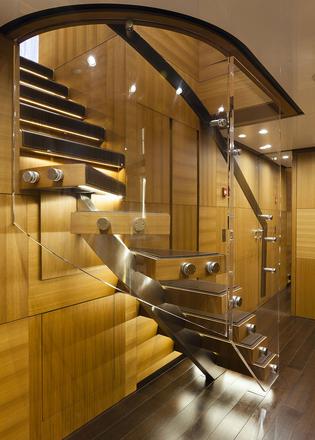 Pachamama – Baglietto’s fast, stylish superyacht designed for all the family

Attaching the adjective “family” to “superyacht” rather cools the simmering sexiness of the most exciting word in the nautical lexicon. Toddlers in the spa pool? Nannies patrolling the aft deck? A large yacht makes a fabulous platform for a family holiday but this is not the stuff of James Bond fantasies. Until, that is, the Italians get involved. Living up to a trio of cultural stereotypes, the La Spezia yard Baglietto has crafted a bambino-friendly boat with serious style – and speed.

“I’ve made some sea trials on a displacement yacht, but I’m not ready yet for that kind of boat,” says the owner of 43.65 metre Pachamama. “I wanted an express boat from the start because I prefer to cruise at 26, 27 knots – at least.”

It made perfect sense for such an owner to approach Baglietto, which specialises in fast aluminium yachts. But this owner is also the (rather cool) father of a 12 year old and a nine year old, as well as a keen cook and entertainer of friends. He needed a boat that would comfortably accommodate relaxed gatherings of friends and family, as well as impress on the water.

The designer engaged to perform this balancing act was Francesco Paszkowski, who has been penning boats for the yard since 1991. Pachamama’s spare, sporty and faintly military lines are distinctively Baglietto (military boats make an appearance in the yard’s 20th century repertoire).

“She combines the past with new elements such as the shape of the superstructure and the black side windows running from the stern to the bow,” says Paszkowski. “Both were reinterpreted according to contemporary design trends and requirements.”

Of Baglietto’s previous launches,_ she has most in common with 44 metre _Monokini, which hit the water in 2013, a few months after the Gavio Group bought the yard – but many of Pachamama’s spaces have been tailored to this owner’s needs.

The dining saloon and galley of _Pachamama _are perhaps the best examples of the boat’s social soul. The idea was to create one large area that could be partitioned into three parts as necessary: a dining saloon, a galley and a smaller, informal dinette forward of the galley, that the owner could use for laid-back breakfasts. Between the glossy cream galley and main dining saloon is a bank of cabinets, with a glass panel in the middle. With this partition raised, the space is set for a formal meal, cooked by the chef; with it down, the owner can whip up meals and snacks himself while chatting to his guests. There’s also a TV in here, in case there’s something unmissable on. “I like football very much,” says the owner, “and this year we have the Euro 2016 in France.”

The main saloon is a broad space, well lit through large windows. It sweeps to a short entrance hall with skylights and out on to the aft deck. The furniture on _Pachamama _is low, simple and comfortable – a relaxing open space for family and friends – and throughout the boat the colours and materials emphasise that feeling. “We realised a contemporary design using just a few materials: teak, limestone silk and dark brown leather,” says Paszkowski, who designed the interior in collaboration with Margherita Casprini. “Natural teak was used for the floor and a checkerboard-like teak panelling for the walls, while ceilings feature white lacquered surfaces. Limestone silk was chosen in the bathroom floor and the tops of some furniture.”

It is a decorative scheme chosen for pragmatic as well as aesthetic reasons. “The style is very simple, very easy,” says the owner. “My idea is to have something that doesn’t bother you over the years. Because maybe when you buy a boat, you like [its ornate décor]. Then after two, three years, you feel that you did something wrong. So you keep the style simple.”

The aft deck features a long L-shaped built-in sofa and a table for alfresco dining – but the show-stopping outdoor space is up a starboard staircase from here. The massive bridge deck has a cosy, private atmosphere that makes it feel like an outdoor saloon. Aft there are sunloungers, over which a sun awning can be set up. In the centre is a huge sofa and coffee table area, while forward is a dining table with adjacent fridge, icemaker and teppanyaki grill. Where’s the spa pool? Unusually, it’s right down on the tip of the bow next to a spacious row of sunpads, creating a third outdoor lounging area. That bumps up to four if you also include the fold-down platform by the aft garage. This arrangement allows family and friends to come together when they want to and do their own thing when they prefer some time alone, without anyone having to hide away inside – an unusual luxury on a yacht of this size.

But in terms of family friendliness, the most exciting area of Pachamama _is the wheelhouse. Aft of the captain’s station are two large sofa areas for observing the yacht’s impressive speeds – she can hit 33 knots – and a PlayStation for when even this cannot hold the children’s attention. “The solution we chose for the settees aft is deeply rooted in Baglietto tradition. Just look back to [44 metre] _Apache II,” says Paszkowski. Here, the theme comprises glossy finishes and dark grey leather, and the state-of-the-art bridge is lit with futuristic purple lights. Different from the décor elsewhere, this marks it out as “the technological heart of the yacht”, says Paszkowski.

Down in the engine room of Pachamama things stay predictably slick. Two MTU engines drive the aluminium planing hull to its impressive speeds, but stabilisation was also important – with four ABT Trac stabilisers – while insulation was carefully planned to prevent noise and vibration. “What I felt when I’ve been on the boat – you can reach 30 knots and you’ll not feel that you are running 30 knots,” says Michele Gavino, general manager at Baglietto. “This is, I think, the most beautiful sensation you can have on a boat.”

All guest accommodation is on the lower deck, with three twin and one double cabin amidships and a full-beam master aft, with a large en suite and walk-in wardrobe. The palette remains calming and simple, with splashes of lime green, cornflower blue and warm orange in soft furnishings, art and lamps. The cabins open on to a good-sized lobby, where a modern staircase in stainless steel and glass leads up to the main deck.

The cabins have a simple, calming palette, with splashes of lime green, cornflower blue, and warm orange. They open on to a lobby where a modern stainless steel and glass staircase leads up to the main deck.

The crew and captain’s accommodation is forward of the guest cabins and many of the same finishes and materials have been used here. These cabins are also of a comparable size to the guest cabins. The compromise is that there is no dedicated crew mess – they will use the dinette forward of the main deck galley when the owner does not need it. Paszkowski explains this unusual blurring of crew and guest space thus: “Although the boat features, of course, separate areas for the crew, the crew is essentially part of the family on board.” It’s a solution that could work, depending entirely on how the boat is used.

Another 43 Fast is under construction at Baglietto, a hardtop version with an enclosed lounge behind the wheelhouse. That boat’s launch is scheduled for the end of the year, with delivery in 2017. The owner of Pachamama has had some interest in his boat, too, although he would like to get some use out of her before thinking about selling. “Even if just for this summer,” he says. Although Pachamama could just as easily prove a firm family favourite for years to come.